Tina Smith isn’t giving up on her clean electricity program 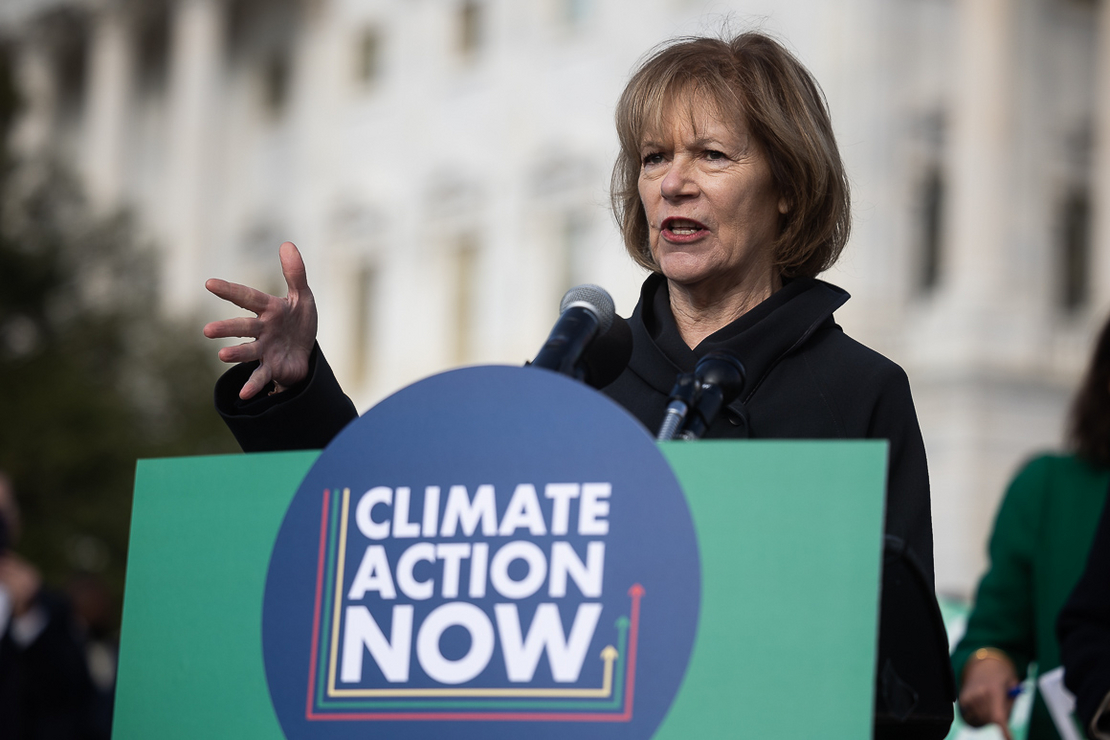 A Senate climate hawk isn’t ready to break environmental policy out of the "Build Back Better" bill to secure climate action and she’s bullish on the prospects of her own plan to address rising temperatures.

Sen. Tina Smith (D-Minn.) told E&E News that she wants the Senate to vote on the $1.7 trillion social spending and climate bill rather than try to pass key provisions individually.

“We’ve done everything we can to get agreement behind the scenes with the policies in ‘Build Back Better,’ and sooner or later, you just have to start voting on it and let the chips fall where they may,” she said.

Smith was the architect of one of the most aggressive climate ideas in years, the Clean Electricity Performance Program, which would have offered utilities financial incentives for selling more renewable energy.

The policy, which could have led to shuttering older coal- and gas-fired power plants, was targeted by Sen. Joe Manchin (D-W.Va.), who demanded that it be removed from the bill. Then, in December, Manchin imploded negotiations altogether by saying he would oppose the "Build Back Better" package.

“I think what we all needed was a little bit of a cooling-off period,” Smith said in an interview late last week. “Everything kind of went to hell in a handbasket at the end of the year, and in every negotiation I’ve ever been in, sometimes you just need to step back, let everybody cool down and then come back to the table again. And that’s where we are right now.”

Manchin, the Senate’s Energy and Natural Resources chair, said last week that he was open to passing climate policy, even as lawmakers remain far apart on child tax credits and other provisions in the "Build Back Better" bill, which contains $555 million in climate-related spending (E&E Daily, Jan 5).

Smith said she has not given up on the Clean Electricity Performance Program. She thinks it is an important tool and is thinking about how to pass some version of the plan through Congress.

She said she has been talking with utility officials and with current and former Republican members of Congress to develop a strategy that could win GOP votes at some point in the future.

Getting some version of the "Build Back Better" bill through Congress is a top climate priority for most Democrats in the next few months. The Senate is now focused on advancing voting rights legislation.

Still, Smith said that whatever form the "Build Back Better" plan takes, it won’t be enough to prevent global temperatures from surpassing 1.5 degrees Celsius above preindustrial levels, so she is working on another piece of climate legislation: electrification.

Climate advocates have pushed for more electrification of buildings to reduce reliance on natural gas as a heating source.

Smith said she is developing a bill with Sen. Martin Heinrich (D-N.M.) to address those issues.

“We’re pushing on both the supply side of power and on the demand side of power and what that means in terms of building American supply chains, not only for clean power supply like solar and battery storage, but also what we can do on the demand side with electrifying buildings and heating and cooling and appliances,” Smith said. “I think that’s tremendously exciting and transformative in the long term.”

She’s working on a separate bill to increase energy efficiency in public buildings.

“Every bit of energy that you don’t use through efficiency isn’t needed in production, so that is often not thought of, but it’s really important in keeping energy prices low and creating jobs and building that supply chain here in the United States,” Smith said.

Smith said her party needs to show voters ahead of the midterm elections later this year that Democrats can pass major climate legislation.

Before the elections, she hopes Democrats will be able say “we passed some of the most transformational energy policy in ‘Build Back Better’ that has the strongest clean energy tax credits that are going to spur development of clean energy and carbon capture, and that we have massive and significant investments in our transportation sector and transmission, which is going to help us get more clean power into the grid and make that grid more efficient," she said.