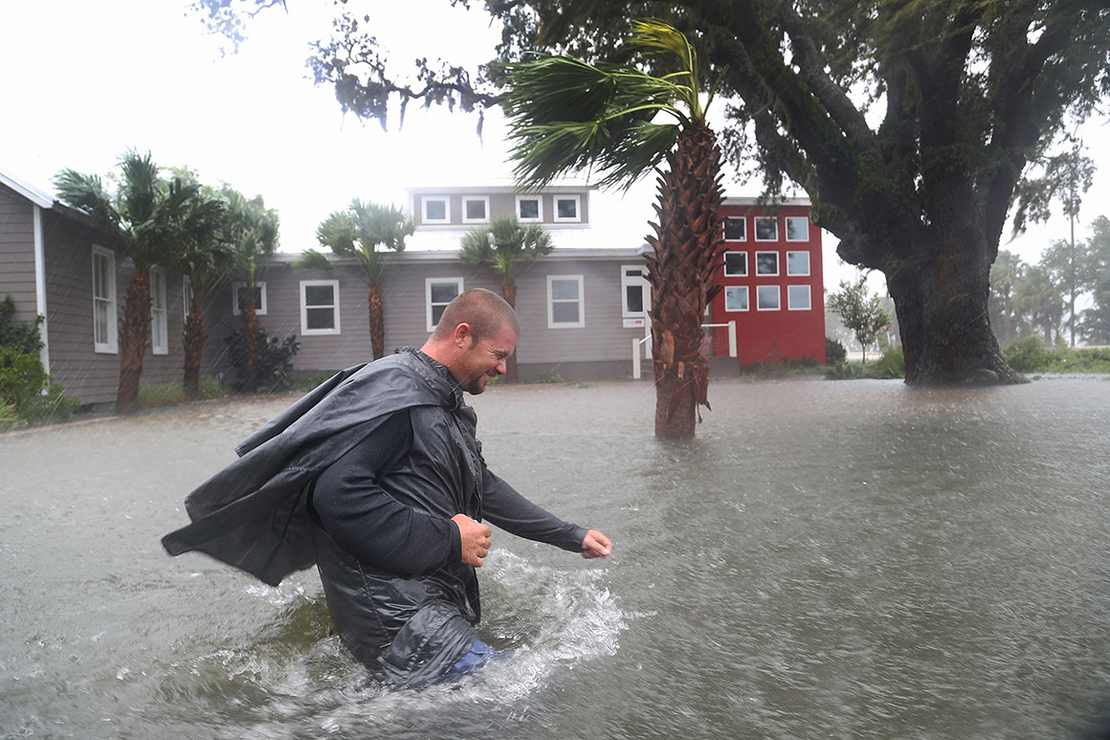 Nick Lomasney walked through a flooded street in St. Augustine, Fla., as Hurricane Matthew passed through the area on Oct. 7, 2016. Joe Raedle/Getty Images

The Treasury Department is growing increasingly concerned that climate change is making property insurance scarce in disaster-prone areas and is looking at launching the first nationwide assessment of insurers’ financial exposure to climate risk.

The Federal Insurance Office sent a preliminary email Thursday to insurance regulators in all 50 states asking what data they have that would show insurance coverage, liabilities and losses for each ZIP code in their state over the past five years.

The data would help the federal office assess whether insurers are declining to cover homes and businesses in areas that are vulnerable to intensifying storms and wildfires and other effects of climate change. The office was created after the 2007-2008 financial crisis to monitor the availability of insurance and risks to insurance markets.

President Joe Biden’s executive order in May 2021 on climate-related financial risk directs the insurance office to assess the “potential for major disruptions” of insurance availability in markets that are vulnerable to climate change. In August, the office solicited public comments on how climate change could undermine the stability of the insurance sector (Climatewire, Nov. 17, 2021).

The insurance office said in its email to state officials that it plans to analyze the risk that insurers face from potentially paying a rising number of claims in disaster-prone areas. Data from each state would identify “the impact [of climate change] on protection gaps and insurance availability, particularly in at-risk markets,” according to the email, which was obtained by E&E News.

The insurance office’s effort comes as anecdotal evidence shows that insurers are pulling out of climate-vulnerable markets. In Florida, hundreds of thousands of homeowners and renters have lost coverage in the past three years as insurers face major losses in part because of hurricane-related claims. Residents have been forced to buy expensive policies through the state-run insurer of last resort (Climatewire, June 22).

California insurers lost $20 billion from the wildfires of 2017 and 2018, prompting them to raise rates or drop policies in high-risk areas. State Insurance Commissioner Ricardo Lara has imposed a series of moratoriums barring insurers from dropping policies in wildfire-prone areas.

“The Federal Insurance Office is more important now than ever in the context of climate change,” said Amy Bach, executive director of United Policyholders, a California-based consumer advocate. “It’s important the federal government is monitoring the health of the property and casualty market because we saw in 2008 how intimately connected insurance, mortgages and the economy are.”

“Climate presents a significant threat to insurance availability and affordability,” Rothstein said in an email. “Analyzing the impacts of climate change such as sea-level rise, wildfires, in-land flooding on property losses including business interruption is important to mitigating that threat.”

Bach said the Federal Insurance Office could learn from states that detailed information on coverage and exposure is “probably not as available as it needs to be.”

The insurance office declined to comment for this story.