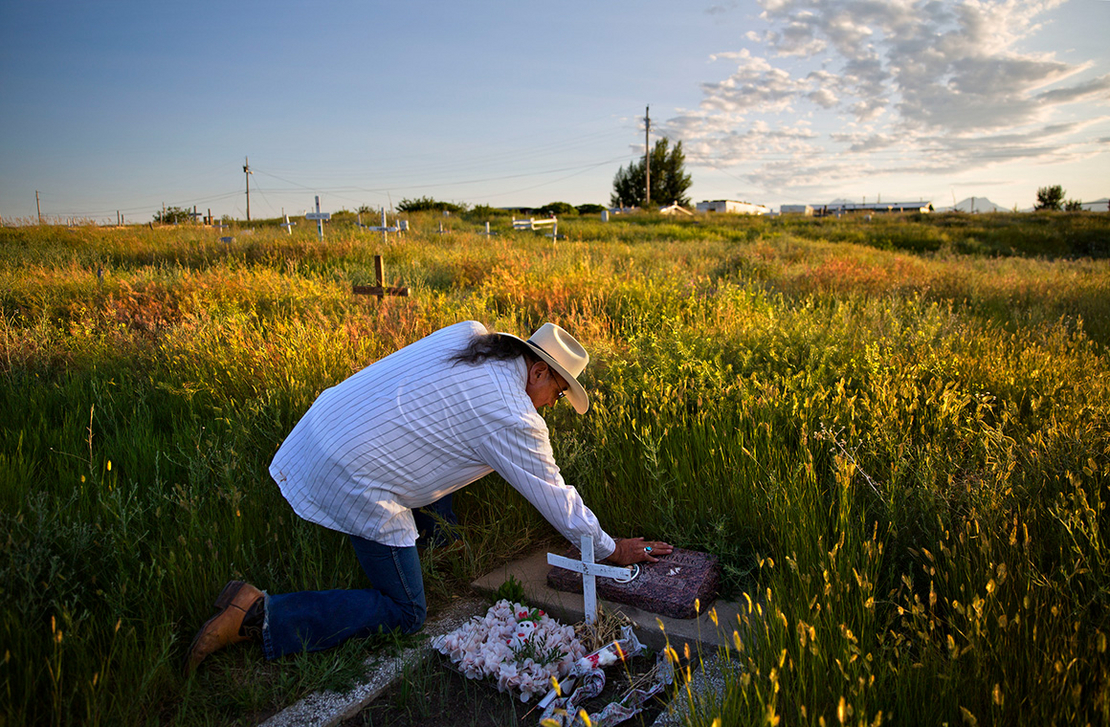 In this 2018 photo, Kenny Still Smoking touches the tombstone of his 7-year-old daughter, Monica, as he visits her grave on the Blackfeet Indian Reservation in Browning, Mont. Monica disappeared from school in 1979 and was found frozen on a mountain. David Goldman/AP Photo

The chair of Montana’s largest tribe accused federal officials of “horrendous failings” in their response to murdered and missing women and said law enforcement and the media have shown “systemic prejudice” by giving more attention to cases involving white women.

As proof, Timothy Davis, chair of the Blackfeet Tribal Business Council, cited the widespread coverage of the death of 22-year-old Gabby Petito, a white woman from Florida who disappeared in Wyoming last month while traveling with her fiancé. A coroner in the state said yesterday that she died by strangulation.

“It is a sad commentary that Gabby Petito’s life had to be taken before the national media awoke to the ongoing and generational devastation of MMIWG [murdered and missing Indigenous women and girls], and the systemic prejudice not only in the approach of law enforcement and prosecutors, but also in the media by its dereliction to give equal attention to missing and murdered women of color,” Davis said in a letter to Interior Secretary Deb Haaland, U.S. Attorney General Merrick Garland, FBI Director Christopher Wray and Sen. Brian Schatz (D-Hawaii), the chair of the Senate Indian Affairs Committee.

The Interior Department this morning said it had no comment on the letter.

In the letter, which was first reported on by Native News Online on Monday, Davis complained that a federal investigation into the disappearance of 20-year-old Ashley Loring-Heavy Runner on the tribe’s reservation in 2017 is still “languishing on an FBI hard drive.”

“The Loring-Heavy Runner family has suffered for too long,” Davis wrote.

Davis said Montana has “an appalling rate of MMIWG cases,” noting that Indigenous people account for 6.7 percent of the state’s population but comprise 26 percent of the missing persons cases.

“This tragedy is being compounded and is escalating due to inadequate and underfunded resources for law enforcement in Indian Country,” he said. “As I write, some 7,000 Indigenous women, girls, and men have been reported as missing or murdered.”

The issue has been a concern for Haaland, the first Native American to lead the Interior Department, who in April announced the creation of a new Missing and Murdered Unit within the Bureau of Indian Affairs Office of Justice Services to lead efforts in investigating the cases.

At the time, she called violence against Indigenous peoples “a crisis that has been underfunded for decades.”

Haaland also addressed the Petito case during a call with reporters last month, saying she was “heartbroken” by the woman’s death, but she also underscored criticism of the media’s focus on the case.

“I want justice for all of these cases,” she said. “Where I can make a difference in particular is in addressing the missing and murdered Indigenous people’s crisis” (E&E News PM, Sept. 23).