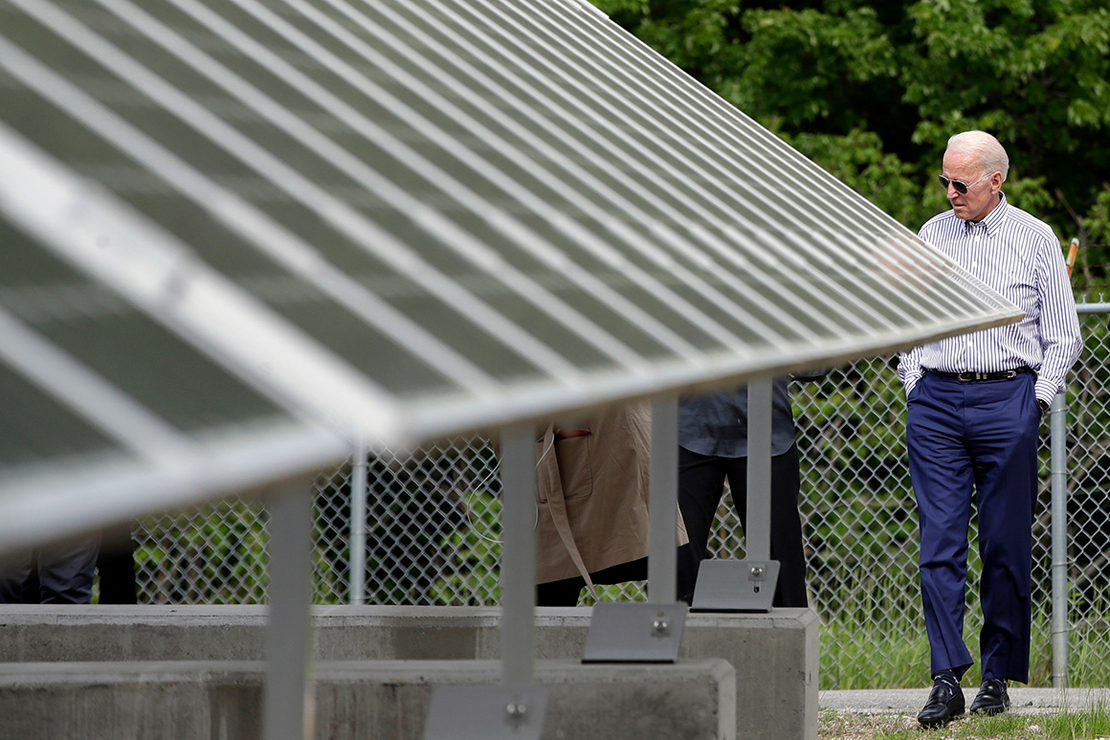 Then-presidential candidate Joe Biden looks at an array of solar panels during a tour at the Plymouth Area Renewable Energy Initiative in 2019 in Plymouth, N.H. AP Photo/Elise Amendola

America’s energy system likely will continue to get cleaner in the wake of the apparent collapse of President Biden’s signature climate plan.

But it won’t deliver the emission reductions needed to prevent the worst impacts of a warming planet, and the United States now risks ceding leadership in technological innovation to Europe and Asia.

That was the widespread view of energy experts following Sen. Joe Manchin’s (D-W.Va.) announcement this weekend that he would not support the "Build Back Better Act" (Climatewire, Dec. 20).

“If we can’t pass regulations, financial incentives are the next best thing, and it doesn’t appear we are doing that either,” said Julio Friedmann, a senior researcher at Columbia University’s Center on Global Energy Policy who served in the Energy Department during the Obama administration. “Continuing to make progress is not the same as a transition. The math of net zero is harsh and unforgiving.”

World energy systems are changing quickly. Renewables will account for an estimated 70 percent of total global spending on new power generation this year, according to the International Energy Agency. The amount of new wind and solar built worldwide in 2021 (290 gigawatts) exceeds the amount of coal running in America (220 GW). In the United States, the solar industry is on pace to smash its annual record for installations with 20 GW of new capacity.

But the renewable boom obscures another fact: The world is burning more fossil fuels than ever. Coal generation is on track to set a new global record, boosted by surging output in China, along with a rebound in the United States and Europe (Greenwire, Dec. 17). Oil consumption, which fell off a cliff during the pandemic, is nearing pre-crisis levels. Natural gas use continues to grow.

The continued reliance on fossil fuels gives the world little time to stem the rise in atmospheric temperatures. When researchers at the Global Carbon Project estimated the planet’s remaining carbon budget earlier this year, they calculated the world has 11 years at current emissions levels before warming exceeds 1.5 degrees Celsius (Climatewire, Nov. 4). It has 32 years before it exceeds the limit for 2 C.

The longer the world waits to decarbonize, the harder and more expensive the barriers to going green become, said Paulina Jaramillo, co-director of the Green Design Institute at Carnegie Mellon University.

“Some of these things may happen anyway, but without the support it will take longer,” Jaramillo said. “If we wait until 2040, we will pass 1.5 C.”

"Build Back Better" would have primed the pumps for a large-scale greening of America’s economy, with $555 billion in climate- and clean energy-related spending. The legislation contained expanded tax credits for maturing technologies such as renewables and electric vehicles, as well as new incentives for emerging technologies such as green hydrogen, sustainable aviation fuel, and carbon capture and sequestration.

Solar and wind likely will continue to grow in the absence of "Build Back Better," analysts said. But where renewable growth rates would have accelerated with the legislation, now they are likely to plateau.

“We expected global renewables to keep going higher and still go higher. But if you take a step back to what’s required to get to 2 C, you need accelerated growth with policy like ‘Build Back Better,’” said Daniel Klein, head of scenario planning at S&P Global Platts.

The legislation’s failure could be an even bigger setback to emerging technologies, said Manuel Ortega, who tracks the renewable industry at Rystad Energy, a consulting firm.

Battery developers are less likely to experiment with alternatives to lithium — which is increasingly in short supply amid a surge in global demand — without tax incentives.

The issue isn’t whether the economy will continue to get cleaner, he said. "It is, are we moving fast enough to avoid all the climate phenomena of the future."

American emissions were 21 percent below 2005 levels entering 2021, but the United States is likely to lose ground this year. The U.S. Energy Information Administration estimates energy-related CO2 emissions will increase 7 percent this year after a pandemic-induced drop of 11 percent last year.

The United States likely will fall short of Biden’s target without action from Congress. Absent "Build Back Better," America likely will face an emission gap of 1.3 billion metric tons in 2030, according to an analysis by researchers at Dartmouth College and Princeton University.

The consequences aren’t merely environmental. While "Build Back Better" is stalled in Congress, Europe, China and Japan are moving forward with plans to green their respective economies, said Friedmann, the Columbia researcher.

“The strength of ‘Build Back Better’ was that it was omnisectoral. It covered everything,” he said. “We can’t ignore transportation or power or industry to succeed. And when I say succeed, I mean to remain globally competitive and meet our climate goals.”