Who owns the wind? An anthropologist has ideas 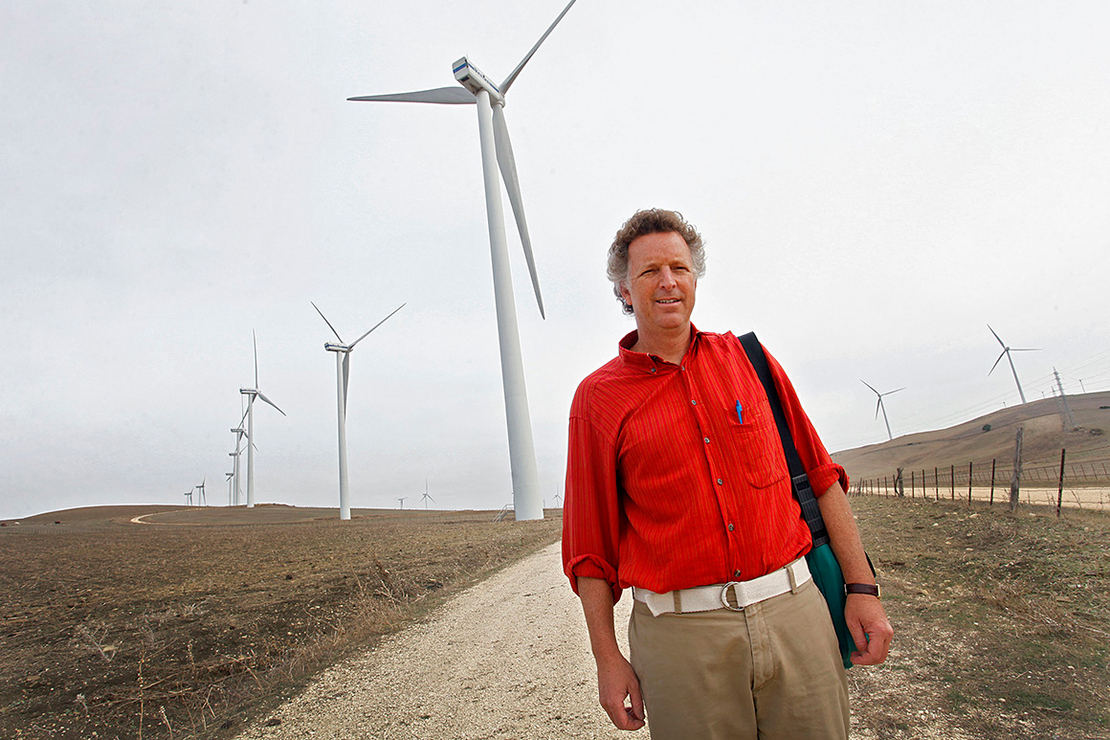 David McDermott Hughes, a Rutgers University anthropologist, studied a Spanish community with a large number of turbines in order to understand the politics of wind. Jesús Marín

David McDermott Hughes is a rare creature: an anthropologist with a working grasp of the energy economy. He proposes a new framework for divvying up the profits from one of America’s fastest-growing sources of energy.

In his new book, "Who Owns the Wind?: Climate Crisis and the Hope of Renewable Energy," he argues that wind — that invisible, ubiquitous force that until recently was useful only to sailors and poets — is fast becoming a finite resource with a clear set of economic winners and losers.

Hughes, 53, is a professor of anthropology at Rutgers University in New Jersey, and a self-professed liberal and scholar-activist. In 2017, after years studying land reform in Africa, he turned his attention to "Energy without Conscience," a book about the oil industry in Trinidad and Tobago.

He doesn’t want America and the rest of the world to sleepwalk into an economic compact on wind, and later wake to find it propping up today’s inequalities.

"If we decarbonize in thirty years — as we must — a single generation of firms and individuals will profit handsomely. There is an alternative to this atmospheric phase of capitalism," he writes. "Governments and other institutions may strike a new deal for energy, wherein the sky remains open to all."

And if the government fails to do so, he argues that the energy transition may fail with it.

"Who Owns the Wind?" summarizes field work he did over the span of four years in Spain. In the first decade of this century, Spain became one of the first countries to rapidly scale up its wind industry. Hughes spent months in a small, poor community near the Straits of Gibraltar that is surrounded by turbines — turbines that the people came to view with a passionate resentment.

What does a community in Spain have to do with the energy transition in the United States? Quite a bit, Hughes says.

In Spain, the transition to wind meant legions of wind turbines lifted to the horizon in just a few short years. By 2013, wind machines were pumping a massive 55 gigawatt-hours of electricity onto Spain’s grid. And then momentum stalled. Hughes’ field work led him to believe a big reason is not-in-my-backyard opposition.

The U.S. wind industry is also poised for growth, with the Democrats’ reconciliation bill in Congress proposing the extension of tax credits for wind farms to 2026, and contemplating incentives for utilities to build more wind power.

That would mean more turbines in more places, and more neighbors contemplating a giant pinwheel interrupting their view of hill and sky.

"Steel," Hughes writes, "will loom above our heads."

And jobs may not materialize to create a counterbalance of goodwill. Since wind turbines operate with little maintenance, they won’t bring communities the generations of jobs that came with oil, gas and coal.

"To get rid of fossil fuels, we have to fundamentally rethink property, livelihood and aesthetics," Hughes writes. The world, he adds, "may be poorer in some ways. It may provide fewer opportunities for work and fewer occasions to admire our surroundings."

Hughes thinks the way to persuade communities to enter the wind bargain is to give everyone a piece of the action.

That, he asserts, is not the way the wind is blowing today.

In his book, Hughes explores the contracts that govern wind power. Most local profits flow to those who own the land where turbines are built. Left out of the bargain, he says, are neighbors who experience the turbine in their "viewshed." If they have no skin in the game, he reasons, those neighbors could insist local governments forbid new installations, and that could stall the wind-energy revolution before it really starts.

"I would like to prevent capitalists from gaining control over an asset only lately discovered and still largely unknown," Hughes writes, later adding: "on its current trajectory … the energy transition will screw the renters and small-scale homeowners of this world."

Hughes spoke recently to E&E News about his research in Spain, the politics of wind and what it means to be an energy anthropologist.

You are an anthropologist of energy, which are two terms that are not usually in the same sentence. How do you see the connection?

The reasons that people don’t associate energy with anthropology is that people mostly do associate energy with fields like engineering and physics and economics. And those are all fields which operate according to universal or general laws, like the law of gravity, the law of the conservation of energy. They don’t vary according to time or place.

So we study human systems that vary across time and space.

What I’m saying in this book is that you have to take local concerns, local context, local culture very, very seriously, and the real obstacles to the transition away from fossil fuels right now are not engineering. We’ve had all the technology we need for some time. They’re not economic, really, because we’re getting toward price parity in so many places.

How did you end up focusing your work on Spain?

I’ve been frustrated by how slowly this transition is happening. I wanted to look at where it’s gone comparatively fast, and I found possibly the village in the world most surrounded by wind turbines. I identified it because I happened to go by it on the national highway on a research trip for something else.

So, you know, I booked a trip.

In the book you explain how people detested the turbines and tried to prevent some of them from being built, but failed because this particular community lacked political power. What does this say about the politics of wind?

I found people who were not very excited about these turbines. They didn’t see this as a future. The reason it’s the most turbine-surrounded village in the world … is that the people didn’t have enough power to prevent that outcome.

One’s immediate response is to say, oh, well, this is kind of NIMBY, reactionary or shallow movement that simply is backward, and that in order to preserve the conditions for life on Earth we have to roll right over them. That was my initial reaction, but I learned a lot more because I’m an anthropologist, and you keep your ears and eyes open. and found that they have some very legitimate criticisms, some criticism that can and should be addressed.

And if they’re not addressed, then these kinds of people have the power in Europe and North America to stop the energy transition and keep us burning fossil fuels for another generation or two.

So, it’s necessary, important and just to listen and learn from the people.

I advocate in this book coming up with a different property regime for wind. One would sever wind rights from land rights and say that the wind is a publicly owned resource.

The land owner didn’t produce the wind, and even in physical terms, the wind isn’t really a product or a property of land. It started someplace else, and it’s going to end someplace else. It’s just passing through.

Why should the landowner be able to put up a big net there and capture value from it? Right? That would seem to be the landowner taking something from the larger community, republic or nation.

So what part of what I tried to do in the book is to persuade people to see the wind as a thing in the first place. In order to claim it, you have to know what it is, you have to look upon it as a treasure that you might want to own and might want to share with others, and we might not want to let any one person grab too much.

And this may sound a little fanciful to our readers. But in fact, this is how fossil fuels and other minerals work in Alaska, where they’re owned by the public, and the Alaska residents got a permanent fund check every year as their portion of the royalties for the exploitation of those subsurface resources.

There is some sign on this. New York state passed a recent law which allows counties to award a revenue streams or compensation to people in the view shed of wind turbines.

This interview has been edited for brevity and clarity.