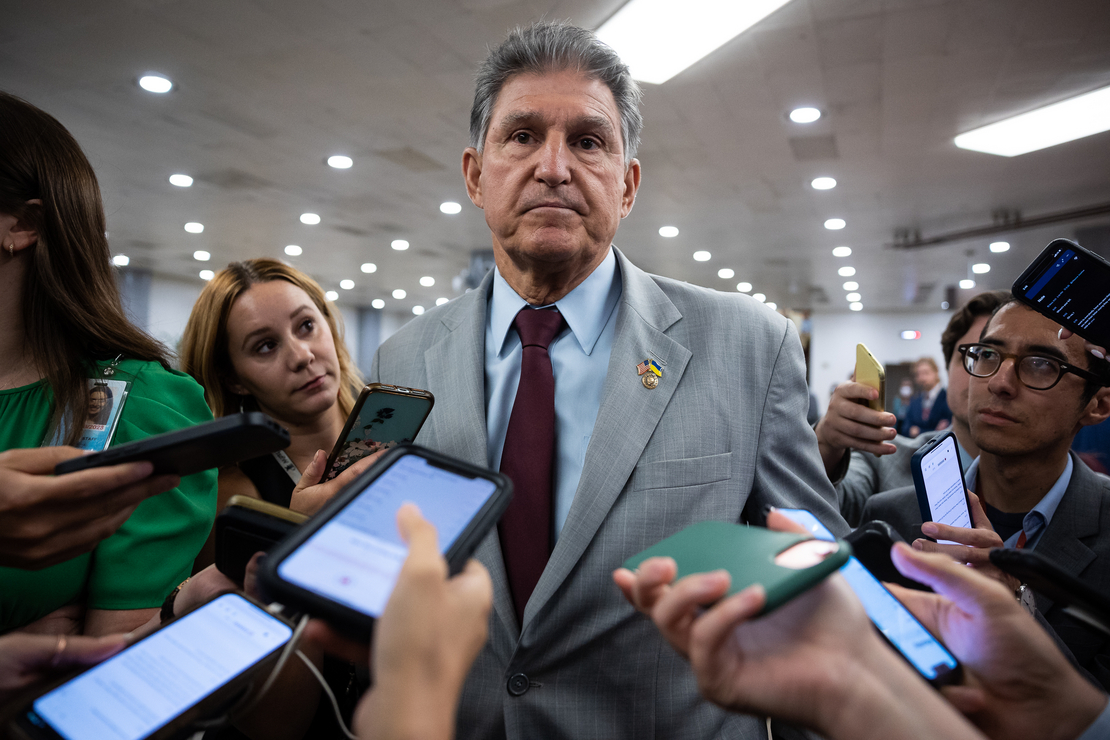 The West Virginia Democrat’s proposal would have greenlit a 300-mile natural gas pipeline, set deadlines on federal environmental reviews and expedited permitting for some fossil fuel projects. That made it anathema among many environmentalists and progressives, who said it would lead to more greenhouse gas emissions at a time when the planet is rapidly warming.

“This is a victory for the survival of the planet and a major loss for the fossil fuel industry,” said Sen. Bernie Sanders (I-Vt.) when Manchin pulled his proposal from the government funding bill.

A statement from the Center for Biological Diversity was simply titled: “Good riddance.”

Yet the permitting bill also contained provisions long sought by climate hawks. It would have given the Federal Energy Regulatory Commission the power to permit long-range transmission lines and decide how to divvy up the costs for building them.

Many experts said the proposal is crucial to spurring development of the power lines needed for the expansion of wind and solar. Transmission is needed not only to plug new wind and solar developments into the grid, but to move power from areas of the country where renewables are producing power to regions where they are not.

The problem: It can frequently take more than a decade to build transmission lines linking different parts of the country (Climatewire, Sept. 22).

Failure to hasten the build-out of transmission could blunt the Inflation Reduction Act, which will pump $369 billion worth of tax credits into clean energy over the next decade. An analysis by researchers at Princeton University found that 80 percent of the emissions benefits associated with the law could be lost if the U.S. continues to build transmission at its current rate.

There is reason to believe the pace of U.S. transmission development will quicken, even without the permitting bill, said Jesse Jenkins, a Princeton professor who contributed to the analysis. Electric vehicle demand will increase demand for power, giving utilities more incentive to build high-voltage power lines. Federal tax incentives to build clean energy should also invite new investment. And FERC is already in the throes of a regulatory process designed to bolster siting and cost allocation for long-range transmission lines.

“The question is whether our current permitting system can keep up with that demand or slow it down relative to what makes economic sense,” Jenkins said.

The permitting bill, he noted, would have removed some of the ambiguity surrounding FERC’s regulatory moves by making clear it has the authority to site lines and determine who pays for their construction costs.

Emily Grubert, a professor of sustainability at the University of Notre Dame who recently completed a stint at the Energy Department, said it was an open question of whether the permitting reforms before Congress would lead to emissions reductions.

Where a transmission-focused bill would have been climate positive, Manchin’s proposal focused on speeding up permitting for all types of energy infrastructure. That likely favored fossil fuels, the incumbent of the energy system, she said.

For permitting reform to be successful, it needs to include strong mandates to cut emissions, Grubert said.

“Ultimately, the IRA is a bunch of tax credits that don’t have to turn into anything because there is not a mandate,” said Grubert. “If someone doesn’t come in and create the support infrastructure, there is not a lot of reason to believe it is going to happen on its own.”

The debate over permitting was reminiscent of California’s approval of a cap-and-trade program in 2017, said Danny Cullenward, a lawyer and climate economist. That deal paired a program to reduce emissions with a series of regulatory rollbacks — and like Manchin’s proposal, he said, it was negotiated by a handful of people and only aired briefly in public before its passage.

Cullenward said he had yet to see an analysis of the proposal’s potential emissions trade-offs, such as the compressed timelines for environmental reviews versus expanded transmission authority for FERC.

“The thing that pushed my button was we had 72 hours to have a major discussion about three or four really important policy areas,” Cullenward said. “It is a high-stakes, high-stress thing.”

Yet the country will need to find a way to address transmission reform given its importance to America’s climate targets, he said. Many environmentalists, Cullenward noted, supported the transmission provisions of the bill.

Whether Congress is up for a permitting debate centered around transmission remains to be seen. Manchin has made clear that permitting the Mountain Valley pipeline, which would carry natural gas from West Virginia to Virginia, is a priority. Republican senators like Pat Toomey of Pennsylvania and Shelley Moore Capito of West Virginia have similarly advocated for approving the pipeline.

In a statement, Senate Majority Leader Chuck Schumer (D-N.Y.) said he would continue conversations with Manchin on how to pass a permitting bill by year’s end. Some Republicans also expressed interest in negotiating a deal, with Capito telling reporters she would broach the subject with her home-state counterpart.

Transmission advocates are hopeful a deal can still be struck. Congress has been particularly productive on energy issues with passage of the Inflation Reduction Act this summer and the bipartisan infrastructure package last year, said Rob Gramlich, president of Grid Strategies LLC, a consulting firm that advocates for transmission lines.

“I appreciate all the attention, but the objective scorecard is we haven’t done anything yet,” Gramlich said.