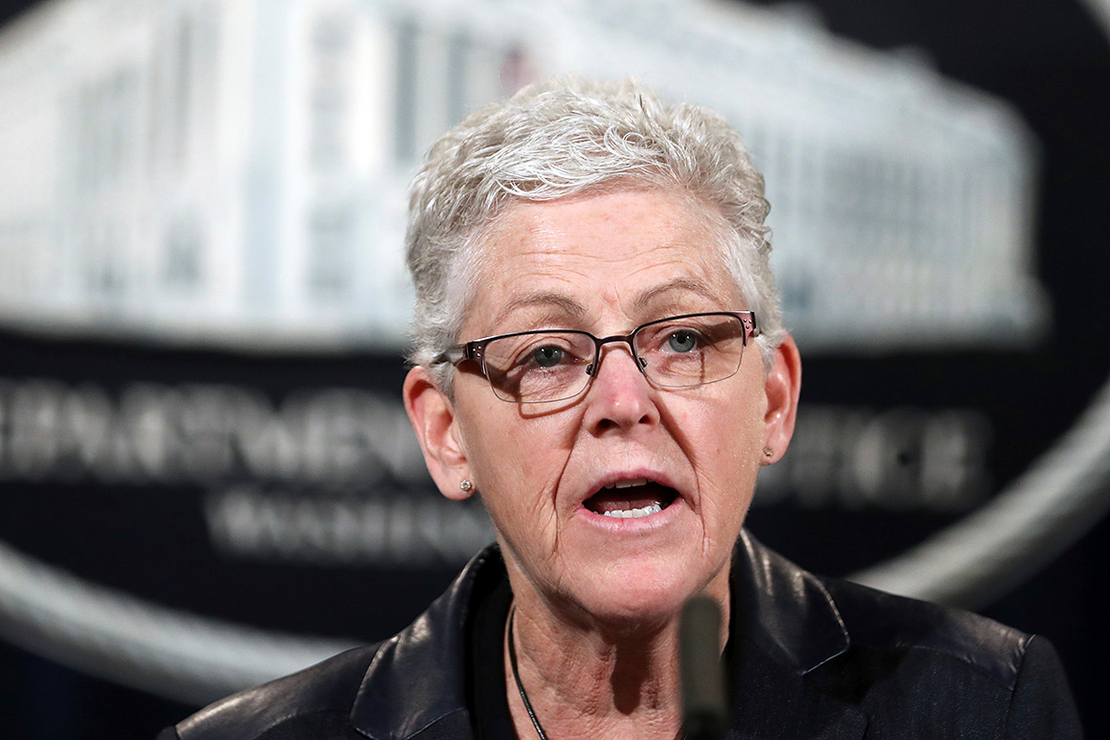 White House domestic climate adviser Gina McCarthy has been working behind the scenes to map out U.S. scenarios for halving emissions by 2030. AP Photo/Manuel Balce Ceneta

The Biden administration owes the world more detail about how the United States plans to deliver on its Paris Agreement commitments.

When the White House unveiled its new pledge in April — vowing to cut greenhouse gas output by 50 to 52 percent compared with 2005 levels by 2030 — it provided few specifics about how it proposed to get there. But global partners and environmental advocates generally welcomed the ambitious pledge as a signal that the United States was eager to reestablish itself as a climate leader after four years of disengagement and withdrawal.

Post-Trump, President Biden’s team was given the benefit of the doubt. The Biden administration in April was only three months old, after all, and the Trump administration had deprived it of the usual transition period by continuing to contest election results. Numerous staff positions remained unfilled, but the new president had a new Democratic-controlled Congress that was expected to help him move policies to support his aggressive commitment.

Further that, White House domestic climate adviser Gina McCarthy and others have signaled since April that more details on implementation would be forthcoming.

But now the clock is winding down to next month’s U.N. climate talks in Glasgow, known as COP 26. And the world is getting impatient for more specifics from the United States.

Biden is set to attend the first two days of the conference with a coterie of 12 of his administration’s most senior officials representing his “whole-of-government” climate offensive. Before Air Force One touches down on Scottish soil, experts who follow administration climate policy expect the administration to show some additional cards about how and with what authorities the 50- to 52-percent pledge would be achieved.

“I think they’ll be trying to figure out how to tell the world, ‘We have a path,’” said Jake Schmidt, senior strategic director for international climate at the Natural Resources Defense Council.

Whatever form it takes — a new strategy or set of announcements, or just an attempt to play up the administration’s early initiatives — this pre-conference rollout will arm Biden, Secretary of State Antony Blinken, EPA Administrator Michael Regan, Energy Secretary Jennifer Granholm and the rest of the delegation with talking points in Glasgow.

But a lack of new details would throw cold water on the Biden administration’s efforts to convince the world that America is back at the table, and stoke concerns that the United States’ direction of travel on climate change could be reversed again.

“I think it would be a blow to the credibility of the U.S. to not go into COP with a plan,” said Robbie Orvis, director of energy policy design at Energy Innovation. “It would be somewhat of a blow to even go in with a plan but without policies that have been passed at this point.”

Biden charged McCarthy and her White House office with drawing up the American commitment to the Paris Agreement — known in U.N. parlance as the nationally determined contribution, or NDC. Those who have engaged with McCarthy and her team say they’ve been working on pre-COP announcements in consultation with U.S. climate envoy John Kerry and his State Department staff.

An early Biden executive order charged 21 federal agencies with contributing to what the April NDC called a “a bottom-up analysis of existing and potential policies and measures at the federal level” under McCarthy’s leadership.

McCarthy and Kerry completed the NDC at warp speed last spring after Biden set an Earth Day deadline ahead of his leader-level summit. Now they’re preparing to release a report in support of that commitment at a time when Biden’s legislative agenda on climate is struggling to gain traction on Capitol Hill, and before the most significant regulatory actions of his presidency have been proposed.

The calendar doesn’t appear to be cooperating.

Democratic leaders on Capitol Hill are trying to move a massive climate-laden spending bill through Congress’ budget reconciliation process to avoid triggering a filibuster. The maneuver demands overwhelming support in the House and unanimous support in the Senate from Democrats, and so far, that doesn’t appear to be available.

This weekend, it was reported that Sen. Joe Manchin (D-W.Va.) had told colleagues he would oppose a key provision of the bill that would encourage utilities to use clean energy and would penalize continued reliance on fossil fuels.

Meanwhile, House Speaker Nancy Pelosi (D-Calif.) has set a deadline of Halloween for passage of the reconciliation bill and a smaller bipartisan infrastructure deal. Biden is due in Glasgow the next day, and Pelosi is planning to lead her own delegation of lawmakers to the conference.

Kerry, whose job all year has been to sell the world on resurgent U.S. climate leadership, played down the damage that a legislative defeat could do to Biden’s Paris pledge.

The special envoy, who once sponsored unsuccessful climate legislation in the Senate himself, told E&E News last week that Biden’s climate pledge didn’t hinge on the bill’s success, but could in fact be reached through a variety of different avenues (Climatewire, Oct. 15).

But if the largest climate spending bill in U.S. history goes down in defeat on the eve of the summit, that’s bound to raise concerns among foreign onlookers who are familiar with the mutable nature of U.S. climate politics after four years of President Trump.

If a Democratic-controlled Congress and White House can’t support Biden’s ambitious new target, what will happen if the balance of power in Washington shifts again later this decade?

‘Where does it leave the rest of us?’

The question, he said, has been: “Will the U.S. as a political system be able to deliver on the commitments, and if they don’t, where does it leave the rest of us?”

“Part of the problem, I think, is the gap between the U.S.’ policies and its domestic action,” said Hare. “There’s always going to be a gap between policies and domestic targets, right? Because the targets are set 10 years ahead, and policies need to catch up. So the fact there’s a gap is not surprising. But it’s a big gap.”

The Biden administration claimed in its April submission to the U.N. Framework Convention on Climate Change that the United States was “broadly on track” to meet the 2015 pledge of cutting greenhouse gas emissions 26 to 28 percent below 2005 levels by 2025 — though a Rhodium Group analysis estimated that the United States is actually on track to cut emissions 20 to 22 percent below baseline by the middle of the decade. But the 50- to 52-percent target was lauded as ambitious precisely because it represents a carbon-slashing overhaul of the U.S. economy.

In crafting its NDC at record speed last spring, the Biden White House was able to rely not only on the analytical capacities of agencies like EPA and the Energy Department but on a bumper crop of analyses by outside research groups that argued that halving greenhouse gases by the end of the decade compared with the 2005 baseline was feasible. Many of those researchers — like Nate Hultman, the director of the Center for Global Sustainability at the University of Maryland, and Sonia Aggarwal of Energy Innovation — since have joined Kerry’s or McCarthy’s staff.

While many of these reports are peer-reviewed, they all make different judgments about the kinds of policy levers that would be available to Washington — or to states and cities — to bring those reductions about. Those were judgments that the Biden administration — and ultimately McCarthy’s White House office — would have had to make before announcing the NDC in April.

“I am confident that the White House spent quite a bit of time saying, ‘What do we think we could actually get? What policies would actually be put in place?’” said Leon Clarke, acting director of the Center for Global Sustainability, which had a hand in crafting two reports that modeled a 50 percent reduction in U.S. emissions by the end of the decade. “There’s no model that will do that for you.”

There may be many ways to deliver on Biden’s pledge, but all of them are hard.

Tom Wilson, a researcher at the Electric Power Research Institute, said a report of his on the NDC (that is currently undergoing peer review) showed that it would require a 66 to 80 percent reduction in power-sector greenhouse gas emissions by the end of the decade. Biden has committed to the high end of that range — 80 percent zero-carbon energy by the end of this decade and a zero-emissions power grid five years later.

But that would mean shuttering most if not all of the nation’s coal plants by 2030 and building the equivalent of half of the nation’s electric system over again with wind, solar and a little bit of gas, said Wilson. The NDC also would see electric vehicle sales balloon from 2 to 3 percent of the market today to 55 to 70 percent by 2030. Battery technologies also would have to improve.

“With the right funding and the right incentives, you can do a lot of this stuff, but they’re each challenges,” said Wilson.

The America’s Pledge report, which Hultman co-authored, stressed the contribution that state policies could make toward a 50 percent reduction by 2030. But Hare said national governments set the framework for Paris commitments, not states or other subnational entities.

“In the absence of federal regulations and incentives, you don’t get the same level of action or economic efficiency in the end,” he said. “I don’t know whether the U.S. would make these reductions that are needed with only more or less randomized state-based actions.”

While gridlock on Capitol Hill is in the spotlight right now, the Biden administration also faces challenges crafting regulations under existing laws, like the Clean Air Act, that can withstand litigation all the way to the Supreme Court. The high court stayed the Obama-era Clean Power Plan in 2016, and has grown more conservative since.

“The reason why you’ve got to have Congress to do it is that the type of energy transformation that you need does go beyond existing regulatory authority, but you also need federal preemption at least to the extent of where you’re going to have litigation with all these regs that are related,” said George David Banks, a Trump White House climate advisor. “And regardless of the party in power, the EPA hasn’t had the best record.”

And though the business sector backs some of the Biden administration’s climate regulations — such as a recently finalized phasedown of climate superpollutants used in cooling and refrigeration — many companies and industries still strenuously opposes others. While many U.S. utilities have committed to zero out carbon by 2050, Biden’s 2035 net zero power pledge doesn’t have broad support within the sector.

Still, the United States has some advantages over other countries in setting its NDCs, especially when it comes to the availability of carbon sinks.