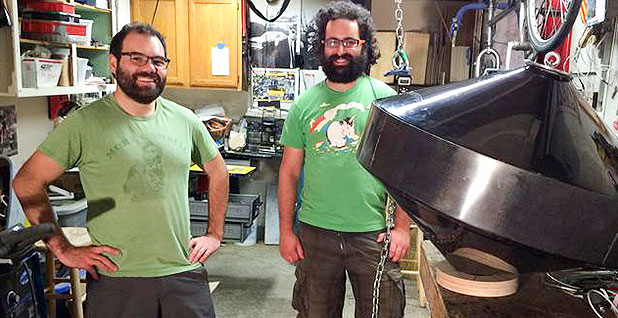 Alex Hagmuller’s years of tinkering in his garage just made him a millionaire.

The 34-year-old Oregonian led a team that this month won the Department of Energy’s first-ever $1.5 million "wave energy prize," which awarded the device that most effectively at least doubles the energy captured from ocean waves via new technology.

Hagmuller and Max Ginsburg were able to quintuple the captured wave energy of previous devices, by building a system with a generator inside an anchored buoy to detect the tiniest of motions. Advocates said they hoped the technology might help lower costs.

"We’re two guys who had an idea straight out of the garage, and we were able to achieve something big," Hagmuller said.

The engineer said he started building small prototypes in his house with Roomba vacuum cleaner parts and bicycle components after being inspired by an early wave energy device as a student at Oregon State University.

While the $1.5 million technically could be used for "going to Disneyland," the plan is to use it to apply for more federal grants to scale up the technology, he said.

The prize comes during a year that wave and tidal energy are, well, riding a wave.

In addition to the DOE announcement, the first U.S. grid-connected wave energy test facility became fully operational in July at a military base in Hawaii. Weeks later, Scotland launched the world’s first large-scale tidal farm attached to the grid and Canada saw the deployment of a tidal turbine at a test facility in the Bay of Fundy.

"I’ve been working on this for 8 ½ years now, and this by far is the most exciting year. There’s no question," said Paul Gay, vice president of Strategic Marketing Innovations.

The wave and tidal energy firsts are occurring now because of earlier policies and incentives converging at the same time.

The wave prize, for example, came after almost two years of winnowing 92 applicants and testing devices at the Navy’s 2.5-acre wave pool in Carderock, Md.

The first shallow device was deployed in 2001, followed by deeper-water devices this year. The project — the first to power a U.S. grid with wave energy — moved along as the Navy searched for more clean energy to power offshore installations, and DOE and companies provided support.

The state also has a mandate for 100 percent renewable power by 2045. In remarks this summer, officials cited President Obama’s 2015 executive order calling for federal emission cuts as a driver.

"More power from more places translates to a more agile, more flexible and more capable force," Deputy Assistant Secretary of the Navy for Energy Joseph Bryan said at the time.

"It has taken a while for projects to be developed, utility-scale machines to be built and financing to be put in place," McCrone said. "Hence 2016 is going to be an important year for actual deployment of machines, and 2017 for gauging the performance of those devices."

Initial turbines from the MeyGen project in Scotland, the world’s first large-scale tidal farm, produced electricity for the first time this year. Scotland’s government is supporting the project via a renewable energy investment fund, with a goal of meeting a 100 percent renewable energy target. By the early 2020s, MeyGen Ltd. envisions 398 megawatts of offshore tidal turbines at the site.

The wave energy prize, meanwhile, was part of a broader push at DOE on a range of marine and hydrokinetic technologies, including devices that harness river currents or aim to harness power through temperature differences between the surface and ocean depths.

The goal is to tackle technical barriers such as corrosive seawater and storms that pose a threat to existing designs. There’s also the challenge of getting more power per square inch of a device — a key factor in lowering costs. The current estimated cost of electricity from ocean energy is more than double that of solar, according to the National Renewable Energy Laboratory.

Hagmuller’s AquaHarmonics — which is essentially a one-man company — was one of only four teams that was able to succeed in at least doubling the amount of energy captured from ocean waves though wave energy conversion devices.

In a sign of how young the U.S. industry is, both Hagmuller and Ginsburg — who met at Oregon State — have day jobs as engineers.

Hagmuller started years ago building a prototype for fun and testing gadgets off the Oregon coast, before spending about $10,000 of his own money to prepare for the DOE competition. The department provided $125,000 to build a larger model once AquaHarmonics became one of nine finalists.

The winning device is a variation of a technology known as a point absorber that resembles a Frisbee-like buoy.

Hagmuller said he spent years researching the right size for the device, which is smaller than most to reduce capital costs. It also uses a new type of control system to maximize output partly by allowing its generators to act as motors during the downswell of a wave.

There’s been some interest from private investors since the prize announcement, Hagmuller said. DOE said it would publish data in the next year from all nine finalists to accelerate technology development.

Technology prizes may be limited in helping the industry, though.

Overall, marine and hydrokinetic technologies are where wind and solar were more than a decade ago, and they are not getting the needed federal support to jump to the commercial stage, advocates say. Europe invested about three times as much money as the United States over the past decade on marine technologies.

Despite increases in recent years, federal funding still lags behind wind and solar by about a third, Strategic Marketing Innovations’ Gay said. Part of the reason for that is the Obama administration was focused on deploying technologies that could have a material impact on climate change within a decade, he said.

"I don’t think we’ve been within that window," said Gay. When recently extended tax credits are included, current federal investments become "even more skewed toward wind and solar," Gay said.

Funding for DOE’s water technologies program jumped from about $7 million in 2008 to $45 million last year, but advocates are calling for $125 million to boost the U.S industry.

DOE says the "technically recoverable" amount of wave energy is 1,170 terawatt-hours — 5 percent of that would be enough to power 5 million homes. Even so, Bloomberg New Energy Finance downgraded the outlook this year for both technologies, projecting a modest 87 MW of tidal and 15 MW of wave power will be online globally by decade’s end.

With wave energy in particular, there have been many global setbacks in the last three years, including the bankruptcy of leading players like Pelamis, McCrone said.

The number of technology developers with sizable demonstration projects has shrunk, and investors are short of confidence, he said.

Tidal power is further along, partly because of lower costs than some other marine technologies. But there’s little development outside Europe. The main tidal stream development of note in North America is at the Bay of Fundy in Nova Scotia, McCrone added.

As for President-elect Donald Trump, advocates are not entirely pessimistic. The military’s support for marine technologies is providing some hope that project planning will continue.

"We are looking forward to working with the new administration," said Linda Church Ciocci, executive director of the National Hydropower Association.