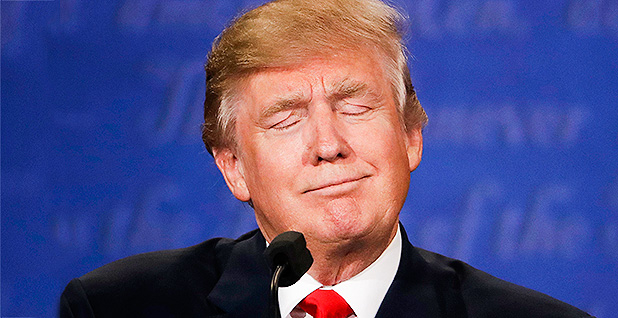 Republican presidential nominee Donald Trump said in the final debate last night that he may not accept the results of the election. Photo courtesy of AP Images.

Hillary Clinton described climate change as a "serious problem" last night in the final presidential debate, an event that promises to disappoint environmental advocates for omitting a discussion about the risks of Earth’s rising temperatures.

It marked the third time in as many debates that Clinton, the Democratic nominee, raised the climate issue without prompting. Her Republican opponent, Donald Trump, did not discuss energy issues or criticize Clinton’s plan to nurture existing greenhouse gas regulations, a point that some GOP strategists say could divert attention away from Trump’s tumultuous comments about women.

"New jobs in clean energy, not only to fight climate change, which is a serious problem, but to create new opportunities and new businesses," Clinton said during a segment on the economy.

The candidates clashed over the use of nuclear weapons, immigration and federal spending, marking a rare focus on policy in a race featuring deeply personal attacks and persistent controversies over Clinton’s use of a private email server and Trump’s crude treatment of women.

Trump also declined during the debate to say if he would accept the outcome of the election.

During a segment on the Supreme Court, Clinton did not mention the Clean Power Plan, a key climate regulation proposed by President Obama that could live or die in the hands of the court. The election will likely tip the balance of the court, now split politically at 4-4, in favor or opposition to the landmark rule.

In a period of the debate that focused on immigration, Trump accused Clinton of once telling an audience from a Brazilian bank that she supports an "open border." Clinton says the speech, which was released by WikiLeaks, was focused on the free flow of energy between the United States and its neighbors, not the movement of people (see related story).

"I do want us to have an electric grid, an energy system that crosses borders," Clinton said last night. "I think that would be a great benefit."

The candidates will race out of the debate into the final stretch of their campaigns. And their closing arguments are virtually opposite.

Clinton is casting herself as the nation’s healer who can unify whites and minorities, women and men, Democrats and Republicans, in an effort to expand her reach in a disjointed electorate that’s experiencing a bitterly negative race for president.

Trump’s message is aimed squarely at his strongest supporters. His warnings of a tainted election and his claims of a conspiracy involving his past comments about women, and his accusers, can galvanize his supporters, according to GOP strategists. But they’re unlikely to turn out the key demographics whose loyalty Trump has failed to win, like voters who are younger, more educated and women.

The climate issue has helped both candidates, in doses, convey those closing arguments.

Clinton devoted a day last week to voicing the risks of rising seas and climbing temperatures in Miami, where millennial turnout is an important key to her success in the crucial battleground state with 29 electoral votes.

President Obama followed up late last week with a skewering assessment in which he claimed that Republican lawmakers have conveyed conspiratorial messages to their voters, including the idea that man-made climate change isn’t real.

Trump is pushing back against that rhetoric. The real estate magnate has refrained recently from calling global warming a "hoax," describing it instead as a partisan issue that’s overblown by Democrats. After Clinton appeared in Miami last week with former Vice President Al Gore, Trump described the event as an attempt to raise fear among Democratic voters, so they’ll vote.

"She had Al Gore get up, because don’t forget, Obama thinks that climate change is the single biggest and most dangerous problem for the world today," Trump said at a rally in Ocala, Fla., as his supporters booed.

"Not nuclear weapons in the hands of maniacs or in the hands of countries that hate us," he added. "No, no, that’s no problem. Climate change is our problem. I’ll tell you how this is going, how we’re doing, folks. If we don’t win this election, I don’t know what I’m going to do."

The Trump campaign didn’t respond to inquiries about his environmental awards.

"Trump’s whole strategy right now is to play to his base, and that position helps him with that constituency," Ferry said in an email. "But I don’t think it is a winning strategy."

"On climate change, he should focus on the negative economic impact Clinton’s climate change proposals will cause while making the point in broad terms, not specifics, that there has to be a better way to protect the environment while protecting American jobs," he added.

Clinton, meanwhile, stood to attract a range of demographic groups by mentioning climate change, said Heather Zichal, a former climate adviser to Obama. Among them are key elements of the Obama coalition, like younger voters, women and minorities.

"Only Trump’s narrow base is at odds with climate action," Zichal said.

Climate is not ‘unimportant’

Leading up to the debate, a host of environmental groups, Democratic senators and columnists urged moderator Chris Wallace of Fox News and the nonpartisan Commission on Presidential Debates to press the candidates about their positions on climate change.

"This is difficult to comprehend and harder to justify," the editorial page of Bloomberg View wrote Tuesday about the omission. "It’s not as if it’s an unimportant or uncontroversial issue."

Climate change is perhaps looming larger in Senate races. In Nevada, where last night’s debate was held, the economy is being helped by growth in the clean energy sector, including Tesla Motors Inc.’s upcoming Gigafactory to build lithium-ion batteries outside the city of Sparks, and the presence of 8,800 jobs in the solar industry, as reported by the Solar Foundation.

Environmental groups are using the economic growth as an argument against electing down-ticket Republicans. A television ad released yesterday by the League of Conservation Voters Victory Fund and the Sierra Club accuses Rep. Joe Heck (R-Nev.) of opposing measures to encourage the expansion of solar power. It’s part of a $1.85 million ad buy in the Senate fight to replace Minority Leader Harry Reid (D-Nev.), who is retiring.

"Thousands of Nevadans go to work every day producing clean solar energy," the ad says. "But when Congressman Joe Heck goes to work, he puts their jobs at risk."

The ad points to Heck’s votes against four Democratic amendments in 2013 that, altogether, would have increased funding for energy efficiency and renewable energy by $325 million. Heck co-authored legislation in 2015 designed to expand solar and wind power on federal land. The bipartisan bill was supported by several environmental groups. He’s running against former state Attorney General Catherine Cortez Masto, a Democrat, and polls show them virtually tied.

In Wisconsin, where Sen. Ron Johnson (R) is trying to fend off a challenge by former Sen. Russ Feingold (D), the climate issue is being raised to turn out Democratic voters. Johnson has questioned the reliability of scientific findings that point to human activities as having a role in warming.

"The climate has changed in my lifetime," Feingold said in a debate Friday. "It’s a frightening prospect. Sen. Johnson doesn’t see it that way."