6 lawmakers to watch as push gets underway 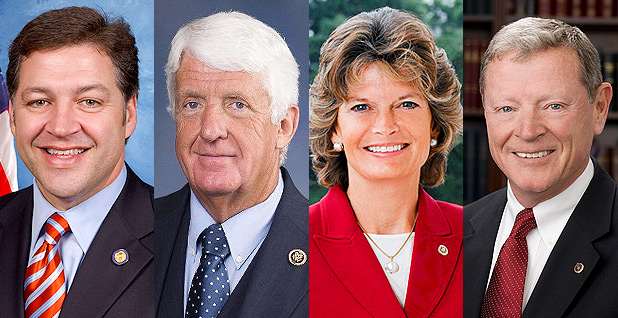 When President Trump unveiled his long-awaited infrastructure plan earlier this month, it prompted a mixed bag of reactions.

Now, though, lawmakers will have to put together legislative language for what’s shaping up to be a long and quixotic push for an infrastructure bill.

They’ll start this week with a slew of infrastructure-related hearings. The Senate Environment and Public Works Committee will gather to discuss Trump’s outline on Thursday.

The House Energy and Commerce Committee, which has touted its legislative work to promote pipelines and hydropower, is also holding a hearing tomorrow on the state of the country’s energy infrastructure.

For Republicans, the usual suspects will be involved with writing a bill and gathering ideas. Senate Majority Leader Mitch McConnell (R-Ky.) will have a say, as will Senate Commerce, Science and Transportation Chairman John Thune (R-S.D.) and Senate EPW Chairman John Barrasso (R-Wyo.). In the House, too, leadership and a variety of chairmen will have their own input.

Many Democrats in both chambers, meanwhile, are poised to oppose the thrust of Trump’s plan. That’s making progress on infrastructure look like a long shot, especially in an election year.

But if a compromise does emerge, lawmakers will have to iron out differences on a number of environment and energy issues. Here are six lawmakers to watch as the push gets underway:

The soon-to-be-retired lawmaker has long championed conservative positions as chairman of the House Transportation and Infrastructure Committee.

One of his biggest pushes in this session of Congress, for instance, has been to privatize federal air traffic control, an effort that’s widely decried by liberal critics.

But Shuster recently floated an idea that made conservatives scoff: raising the federal gasoline tax.

Shuster brought it up to his Republican colleagues earlier this month at the GOP congressional retreat in a discussion about paying for infrastructure investment. He said he got a "mixed reaction" (Greenwire, Feb. 1).

Hiking the gas tax for the first time since 1993 could help fund Trump’s plan, and it would prop up the Highway Trust Fund, which is set to become insolvent in coming years, Shuster recently told Fox News.

"As a conservative, the principle of a conservative is if you use something, you should pay for it," he said. "And that’s what the gas tax is. It’s a user fee."

Republicans are unlikely to go along with the idea. But it could remain part of the conversation thanks to Shuster and Trump, who is said to have endorsed a gas tax rise at a meeting with lawmakers earlier this month.

The chairman of the Senate EPW Subcommittee on Transportation and Infrastructure is all in for Trump’s plan. He even had talking points for a chat with reporters as he strolled through the Senate basement earlier this month to highlight permitting reform proposals.

Inhofe has deep ties to Trump’s appointees at U.S. EPA, and he could be a champion for regulatory rollbacks sought by Administrator Scott Pruitt, a fellow Oklahoman.

Among other things, the administration has proposed limiting reviews under the National Environmental Policy Act to two years and altering provisions of the Clean Air and Clean Water acts (Greenwire, Feb. 12).

Inhofe is also a veteran of past congressional debate on infrastructure, and this time around, he’ll likely be one of the loudest voices pushing for the White House’s permitting overhaul and against raising the gas tax.

During that effort, he worked closely with then-Sen. Barbara Boxer (D-Calif.), the ranking member on the committee, to strike compromises that were key to getting the bill through Congress.

It’s an experience Inhofe likes to tout when asked about Trump’s plan. And though the political environment has changed since then, the Oklahoman may need a similar effort if there’s any hope of getting an infrastructure bill passed this year.

Inhofe advanced that style of unified front last week, when he penned an op-ed in The Wall Street Journal on infrastructure with Sen. Sheldon Whitehouse (D-R.I.), an odd pairing given their contrasting views on climate change.

Carper, like Inhofe, is a veteran of the last few efforts to fund infrastructure and reform permitting. This time, he’ll be an important negotiator as ranking member of EPW, taking on the role Boxer played in 2015.

So far, the Delaware Democrat has used that position to repeatedly push back on Trump’s plan, particularly the financing outline.

The former governor has taken issue with the idea of leveraging so much capital from state and local governments with a relatively small $200 billion federal investment.

That, he says, would flip the traditional formula for infrastructure on its head and put a big burden on states, especially when it comes to highways, which have traditionally been funded with an 80-20 federal-state split.

"It’s a big shift of expectations and responsibility away from the federal government and to the states," Carper told reporters recently.

"I tell people here I’m a recovering governor," he said. "And in Delaware and most states across the country, if you ask the departments of transportation what percentage of your roads, highways, bridges cost is borne by the federal government, almost everybody would say half."

As for the issue of streamlining reviews, Carper has been slow to take an official position, though he has said there might be some "commonsense" areas ripe for compromise.

He and other Democrats, however, have questioned the need, with the executive branch still implementing the permitting provisions Congress passed in the FAST Act and the Moving Ahead for Progress in the 21st Century Act in 2012.

Trump has proposed, for example, putting a 150-day statute of limitations of NEPA reviews to cut down on lawsuits, an issue that was already addressed, albeit on a more limited basis, in the FAST Act.

"Before we’ve actually fully implemented what we adopted in 2012 and 2015, does it make sense to now double down in that regard?" Carper asked recently.

Bishop isn’t the first name that comes to mind in discussions about roads, highways and bridges. But he’s a longtime champion of reforming NEPA with a surfeit of legislative experience on permitting and public lands issues. And he will have plenty to say about how Congress can reach Trump’s permitting reform goals.

The famously wry Bishop told E&E News earlier this month that congressional Republicans will be exploring a range of options on permitting, including alternatives that don’t require them to "beat people over the head with it" (E&E Daily, Feb. 15).

On NEPA, for instance, "you don’t have to put a two-year thing in it," Bishop said.

"You simply make sure that perhaps we emphasize which agencies are the lead and give those agencies responsibility for coming up with a plan," the House Natural Resources chairman added.

That, too, is an issue addressed by the last two highways bills, but Republicans will likely want to go further.

On that front, Bishop’s involvement could be important for natural resources developers and the mining industry, which is hoping Trump’s plan might help advance projects (Greenwire, Feb. 22).

DeFazio tore into Trump’s plan as soon as it was made public two weeks ago.

"For more than a year, we have been hearing from President Trump about a big, beautiful infrastructure proposal," he said in a statement on Feb. 12. "Now, it turns out President Trump’s plan is embarrassingly small."

DeFazio, the House Transportation and Infrastructure ranking member, is one of a big pool of House Democrats who view the plan as gutting landmark environmental laws and shredding the Transportation Department to pay for the private sector to build roads.

That criticism highlights one of the biggest hurdles to the push by the president and Republicans: No one knows how to pay for it.

The administration has proposed cutting Amtrak funding in half, cutting the Transportation budget and eliminating the popular Transportation Investment Generating Economic Recovery grants. Appropriators rejected similar cuts last year, and they’re likely to do so again.

As for DeFazio, he’ll be a key channel through which Democrats will push their own agenda on infrastructure, centered on climate resilience and more public funding.

They’ve outlined their ideas, though not in much detail. House Democrats unveiled a proposal to spend $1 trillion in federal money on infrastructure just a few days before Trump released his plan (Greenwire, Feb. 8).

Murkowski, who chairs the Senate Energy and Natural Resources Committee, has made clear she’s eyeing the infrastructure push as a possible vehicle to carry the bipartisan energy legislation, S. 1460, she assembled with the help of ranking member Maria Cantwell (D-Wash.).

A previous version of the proposal, which contains provisions to modernize the electric grid and addresses other energy infrastructure policies, died in the closing weeks of the 114th Congress after House negotiators threw in the towel on conference talks.

The updated version of the bill awaits floor time after McConnell decided to bypass the committee and put the bill directly on the Senate calendar.

"We’ve had an opportunity once in the Senate to vote on what we thought could be the base for good infrastructure for energy, and we’re ready to go if only given the opportunity," Murkowski told E&E News earlier this month.

During a bipartisan White House meeting on infrastructure that included Trump, Murkowski said the energy discussion included "a little bit about pipelines but really more to the regulatory and permitting side that we need to have in place in order to make the infrastructure real."

One issue she raised at that meeting was how the plan might finance rural infrastructure efforts.

"Who’s going to be interested in a big public-private partnership project out in a very rural remote corner of the state of Alaska, where you don’t have a very good return on an investment?" she asked. "How will a tolling structure work in a place where you just don’t have the traffic?"

As chairwoman of the Interior-Environment Appropriations Subcommittee, Murkowski will also have a say in distributing some of the $20 billion in funds agreed to in the two-year budget deal reached earlier this month, which are supposed to address rural water and energy projects (E&E Daily, Feb. 9).

Schedule: The Senate Environment and Public Works Committee hearing is Thursday, March 1, at 10 a.m. in 406 Dirksen.