Abandoning 60% of global oil might limit warming to 1.5 C 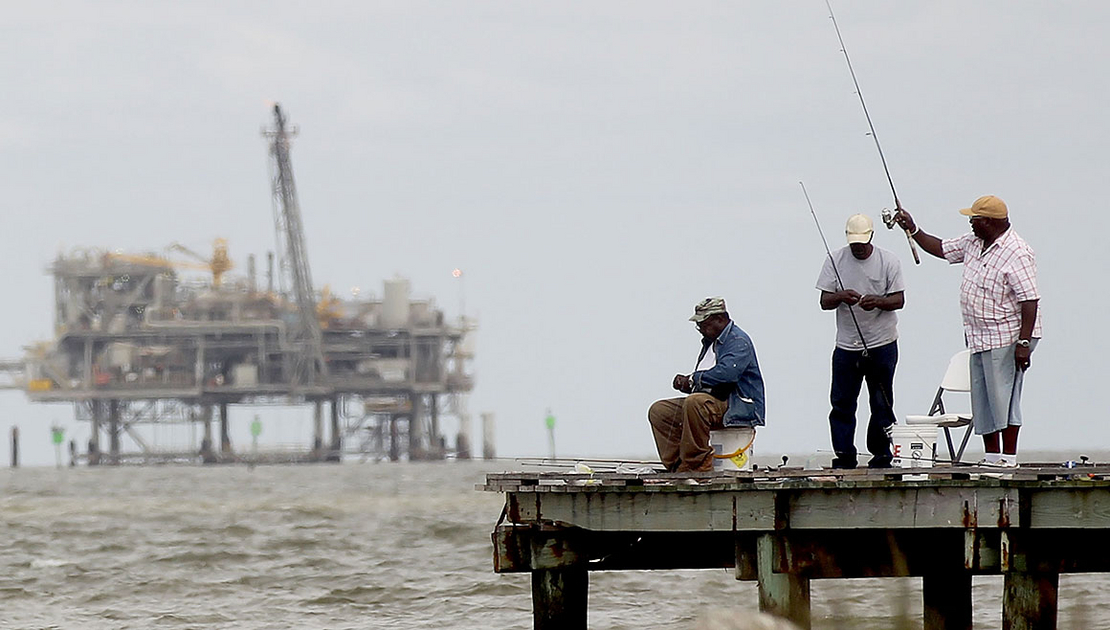 People fishing off Dauphin Island, Ala., with an oil rig in the background. Mario Tama/Getty Images

The majority of the planet’s fossil fuel reserves must stay in the ground if the world wants even half a chance — literally — at meeting its most ambitious climate targets.

A new study published yesterday in the journal Nature found that 60 percent of oil and natural gas, and a whopping 90 percent of coal, must remain unextracted and unused between now and 2050 in order for the world to have at least a 50 percent shot at limiting warming to 1.5 degrees Celsius.

These results are broadly consistent with the findings of numerous recent reports, from the United Nations, the International Energy Agency and others, which have “all provided evidence that dramatic cuts in fossil fuel production are required immediately in order to move towards limiting global heating to 1.5 degrees,” said Dan Welsby, a researcher at University College London and lead author of the study, at a press conference announcing the results.

Under the Paris climate agreement, nations are working to keep global temperatures within 2 C of their preindustrial levels, and within 1.5 C if at all possible. Research suggests that the effects of climate change — melting ice, rising seas, more extreme weather and so on — will be worse at 2 C than at 1.5 C, and worse still at higher temperatures. These targets are an attempt to limit the consequences of global warming as much as possible.

Yet studies increasingly suggest that the 1.5 C target is looming closer and closer.

The world has already warmed by more than a degree Celsius since the start of the industrial era, which began about 150 years ago. A landmark U.N. report on climate change, released last month by the Intergovernmental Panel on Climate Change, warned that the 1.5 C mark could be reached within two decades.

To have even a 50 percent chance of meeting the target, the U.N. report suggests, the world can emit only about 460 billion metric tons of additional carbon dioxide into the atmosphere. That’s another 12 years or so of emissions at the rate at which the world is currently going.

That means global carbon emissions need to fall sharply, and immediately, in order to meet the goal.

The new study, published by four researchers from University College London, paints a similarly urgent portrait. But it looks at the future from a different angle. Instead of calculating the emissions consistent with a 1.5 C target, it calculates the amount of fossil fuel reserves that must go unused.

The study started with a carbon budget of about 580 billion metric tons of carbon dioxide. That’s based on an earlier IPCC report, from 2018, focused on the 1.5 C target. (The newest report suggests a substantially smaller budget.)

The researchers then used a special model to simulate how the world’s energy systems might evolve over the coming decades to stay within that budget. For instance, the simulations suggest a rapid shift away from fossil fuels and toward renewable energy sources. The model also assumes a substantial amount of carbon dioxide removal in the future — using various forms of technology to suck carbon out of the atmosphere.

Even with these assumptions, the strict carbon budget was “essentially the very limit of what our model can solve for,” said James Price, another author of the study. The model attempts to stick within realistic constraints on costs and the speed at which global economies can reduce their reliance on fossil fuels.

The model suggested that steep cuts in fossil fuel production are necessary between now and 2050 to meet the 1.5 C target. For certain types of fossil fuels in certain parts of the world, the model implied that production should have already peaked by now. For others, production must begin falling right away.

In much of Europe, the United States and Russia, for instance, gas production must peak now. On the other hand, gas production may continue to increase for a time in other parts of the world. The Middle East, Africa and certain parts of Asia might see gas production increase until the 2030s before beginning to fall.

Altogether, oil and gas production must decline by about 3 percent each year through 2050, the study found.

Many regions with the largest fossil fuel reserves must keep proportionately large shares of those resources in the ground. Canada, for instance, must keep 83 percent of its extractable oil in the ground, compared with about 38 percent in Russia and other former Soviet states.

In the United States, the study suggests that 31 percent of oil reserves, 52 percent of natural gas and 97 percent of coal must stay in the ground.

These cuts are already steep. But it’s likely that the study has underestimated the challenge, the authors warn.

For one thing, the study investigates only what must be done to have a 50 percent chance of meeting the 1.5 C target. Better odds would require even stronger action. The study also assumes a larger carbon budget — meaning it allows for more carbon emissions — than the most up-to-date U.N. report suggests.

And the model used in the study also assumes a lot of future carbon dioxide removal, relying on technologies many scientists are still skeptical about.

So are these production cuts even possible?

“Certainly they are technically possible,” Welsby said. But he cautioned that, at the moment, “our global plans and operational fossil fuel trajectories are going in completely the wrong direction.”

“It really is a case of having the political will to resist the temptation of extracting every last bit of fossil fuels, as it were, and focus on really pushing hard on the low-carbon economy. It is definitely feasible, but it really comes down to the politics of the situation,” Price added.

At the same time, the Paris Agreement’s 2 C target remains well within reach. Even if the 1.5 C target is swiftly approaching, experts have repeatedly cautioned that this doesn’t mean there’s any reason to give up on climate action.

“Given the level of evidence that to get as close as possible to 1.5 degrees will offset the worst impacts of our changing climate, I think that is why we tried to push our model as far as it would go toward 1.5,” Welsby said.