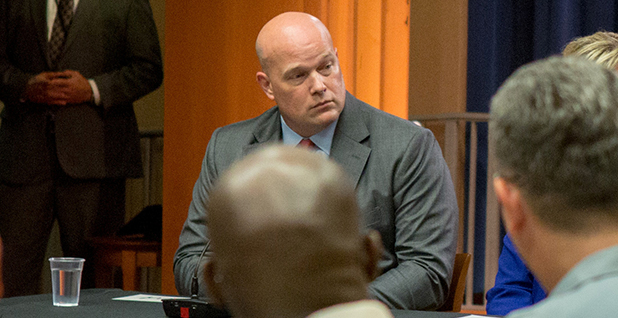 Matthew Whitaker participated in a roundtable discussion with foreign liaison officers from the Joint Interagency Task Force South at the Justice Department in August, when he was chief of staff to Attorney General Jeff Sessions. Yesterday, President Trump named him acting attorney general after Sessions resigned. Allison Shelley/Reuters/Newscom

The new acting head of the Department of Justice once went after the "environmental left" and rushed to defend oil giant Exxon Mobil Corp.

He played a similar role two years ago when he defended Exxon in a legal fight over its financial and climate change disclosures — commentary that is critical in light of his new leadership role at DOJ, an agency tasked with enforcing key environmental laws.

At the time, he was serving as executive director of the Foundation for Accountability and Civic Trust, a nonprofit that describes itself as an ethics watchdog.

Whitaker took aim at a group of Democratic state attorneys general that had formed to address climate change, including through investigations of fraud. Whitaker at the time accused them of undermining free speech.

"In an effort to undermine the First Amendment by trying to criminalize political disagreement, chief legal officials from across the country are currently investigating individuals, groups, and businesses that challenge their views on climate change," Whitaker wrote.

It was language that Exxon, along with its industry and conservative allies, had been using for months to combat the investigations.

Attorneys general of New York and Massachusetts had been investigating the firm for potentially defrauding investors and the public by misleading them about how climate change and regulations to address it might affect business.

At a news conference in the spring of 2016 in New York, 17 attorneys general — led by former New York Attorney General Eric Schneiderman (D) and Massachusetts Attorney General Maura Healey (D) — said they would use their power to fight climate change (Climatewire, March 30, 2016).

That could include bringing financial fraud cases, Schneiderman said. "Our offices are seriously examining the potential of working together on high-impact, state-level initiatives, such as investigations into whether fossil fuels companies have misled investors about how climate change impacts their investments and business decisions," he said.

And Healey told reporters that her office had opened an investigation of Exxon, seeking to determine whether the company had defrauded investors and the public by downplaying or misrepresenting the risks of climate change to its business.

"The allegations repeated today are an attempt to limit free speech and are the antithesis of scientific inquiry," Exxon spokeswoman Suzanne McCarron said shortly after the news conference.

The company and its industry peers have repeatedly deployed that First Amendment defense, even though the subpoenas underpinning both state inquiries have been upheld in court and they ask for financial information primarily, not opinions.

In his column, Whitaker quoted Paxton, who had criticized a subpoena of Exxon as "unconstitutional and harassing."

He also quoted Rudolph Randa, a federal judge from Wisconsin, who said in 2014, as he shut down an unrelated legal probe: "As other histories tell us, attempts to purify the public square lead to places like the guillotine and the gulag."

DOJ has seen other personnel shifts in recent months with ties to the oil and gas sector. Earlier this month, the Senate confirmed Jeffrey Bossert Clark to lead the Environment and Natural Resources Division at DOJ. Clark represented BP PLC after the Deepwater Horizon oil spill of 2010.

FAST did not immediately respond to a request for comment. DOJ declined through a spokesman to comment.