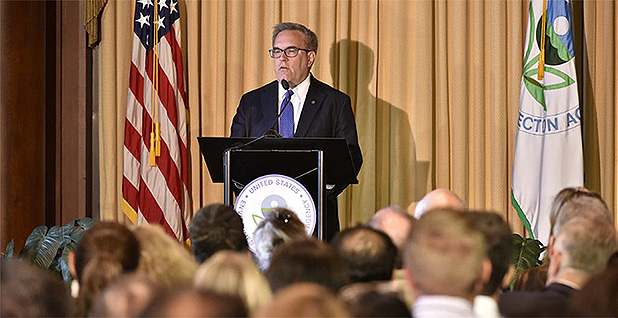 EPA Administrator Andrew Wheeler today announced movement on two long-delayed initiatives: reorganization of the agency’s regional offices, which will take effect next Monday, and a new lead and copper proposal, which will be released this summer.

The upcoming proposal will be the first update in more than 20 years for the rule, which limits concentration of the two metals in tap water, Wheeler told a lunchtime crowd of attendees at a conference of the Environmental Council of the States (ECOS).

Like the forthcoming reorganization, release of the proposed rule has been repeatedly pushed back.

"We actually could have proposed it months ago," Wheeler said, adding that he was briefed on the topic after becoming acting EPA chief last July. But, Wheeler said, he sent the draft back to EPA’s Office of Water out of concern that, with the money that’s available, it will take "20 to 30 years" to replace all lead surface lines.

As a result, Wheeler said, he asked agency staff to work on figuring out where the most corrosive lines are "so we can try to address those first."

Wheeler had announced plans for reorganization of EPA’s 10 regional offices last September, with a goal of more closely matching the agency’s headquarters structure.

But in a phone interview afterward, Nicole Cantello, president of the American Federation of Government Employees Local 704, which represents EPA workers in Chicago-based Region 5, predicted that the plan will lead to "massive upheaval" and "misalign" the agency’s enforcement efforts with those of states. In Region 5, which covers six states, about 40% of some 1,000 EPA employees will either see their jobs change completely or be moved into different areas, Cantello said.

ECOS represents the heads of state environmental agencies. Its spring conference, which is taking place in a northern Virginia hotel, is scheduled to run until Wednesday. Wheeler is one of several top EPA officials scheduled to participate in the event. Chief Operations Officer Henry Darwin was scheduled to be part of a roundtable this afternoon to address the "timeliness" of permit issuance. Enforcement chief Susan Bodine was then supposed to follow in a separate event — open only to EPA and state officials — focusing on the next round of proposed National Compliance Initiatives.

During his remarks, however, Wheeler objected to several criticisms raised by ECOS and three other state regulatory organizations in a letter last week about EPA’s "action plan" for per- and polyfluoroalkyl substances, or PFAS.

Among other recommendations, the groups called for "more timelines and deadlines across the board." While Wheeler did not address that recommendation, he voiced the belief that the PFAS blueprint "is the most comprehensive multimedia action plan ever developed" in EPA history to deal with a chemical concern.

Jennifer McLain, acting director of EPA’s Office of Ground Water and Drinking Water, is on the agenda tomorrow morning for a panel discussion with state and Defense Department officials on the theme of "Building Confidence in Communities: Rising to the PFAS Challenge."