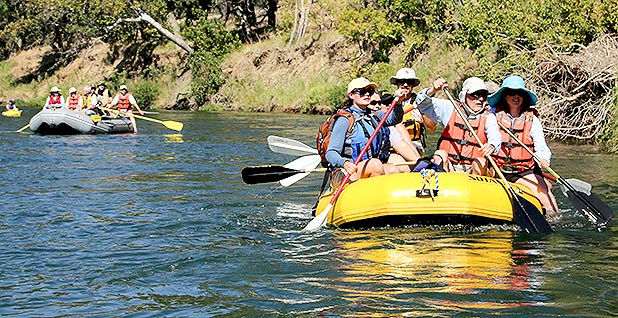 Members of a Bureau of Land Management resource advisory council take a field trip. The Interior Department is reviewing the "charter and charge" of its more than 200 advisory councils. Photo courtesy of BLM.

The Interior Department is formally reviewing the "charter and charge" of more than 200 advisory panels that assist federal agencies managing hundreds of millions of acres of public lands at a time when the Trump administration is considering significant changes to land-use designations and management practices.

The Bureau of Land Management has told members of its 30 resource advisory councils (RACs) to postpone scheduled meetings through at least September as part of the new national review of Interior’s advisory panels, both internal and external.

That includes canceling meetings of six other BLM advisory committees affiliated with specific sites within the agency’s National Conservation Lands system, as well as two other high-profile panels: the National Wild Horse and Burro Advisory Board and the North Slope Science Initiative Science Technical Advisory Panel in Alaska.

The timing means some land management recommendations — including a high-profile review of national monuments — will be completed without the advisory panels’ input.

Heather Swift, an Interior spokeswoman, told E&E News in an email today that the review is part of an ongoing effort by Interior Secretary Ryan Zinke aimed at "restoring trust in the Department’s decision-making."

Swift said the review of "the charter and charge of each Board/Advisory Committee" is designed to "maximize feedback from these boards and ensure their compliance with the Federal Advisory Committee Act," the 1972 law that ensures that advice by various advisory committees is objective and accessible to the public.

But Swift said the review is also designed to ensure compliance with "the President’s recent executive orders."

President Trump in the last month has signed a number of executive orders, including one requiring the review of all policies that may "potentially burden" energy production activity on federal lands.

Trump last week also signed one requiring Interior to review the boundaries of dozens of national monuments designated within the last two decades and to decide whether they should be altered or eliminated (Greenwire, April 26).

That executive order is targeted at more than 30 national monuments designated since 1996 that comprise at least 100,000 acres. It will initially focus on the fate of the recently designated 1.35-million-acre Bears Ears National Monument but will ultimately include sites like the 1.9-million-acre Grand Staircase-Escalante National Monument, both in Utah.

That executive order requires Zinke to submit a report with his recommendations on the national monuments to the president within 120 days, before the Interior review of the advisory committees and boards is completed and the postponement of the meetings lifted.

That means the Utah resource advisory council that provides recommendations to BLM on management of the 22.9 million acres of federal public lands in the state will not weigh in on the national monument issue; neither, presumably, will the members of the agency’s Grand Staircase-Escalante National Monument advisory committee.

That concerns Greg Zimmerman, deputy director of the Center for Western Priorities.

"The Trump administration and Interior Secretary Zinke talk a big game about including Western communities in decisionmaking on public lands, but this action proves it’s nothing more than talk," Zimmerman said. "They are shutting out input from communities just as the administration takes unprecedented steps toward wiping national monuments from the map."

Canceling the BLM RAC meetings "sends a clear signal that Secretary Zinke intends to make decisions behind closed doors and not through an open and transparent public process," Zimmerman said.

The agency’s 30 RACs, whose members are appointed by the Interior secretary, are designed to help guide BLM administrators on a wide variety of issues involving major projects such as multistate transmission lines and energy projects.

But there have been some high-profile examples in the past two years where BLM ignored the recommendations of its RACs.

BLM in January approved the final two segments of the Gateway West Transmission Line Project in Idaho over the objections of an eight-member subcommittee of the BLM Boise District’s RAC that concluded the route would unnecessarily affect communities, natural resource values and private landowners (Greenwire, Jan. 20).

And last year, BLM formally approved the 287-megawatt Soda Mountain Solar Project in the Southern California desert, despite the recommendation of BLM California’s Desert District RAC against the project and its impacts on wildlife, groundwater quality and other natural resources (E&E News PM, April 5, 2016).