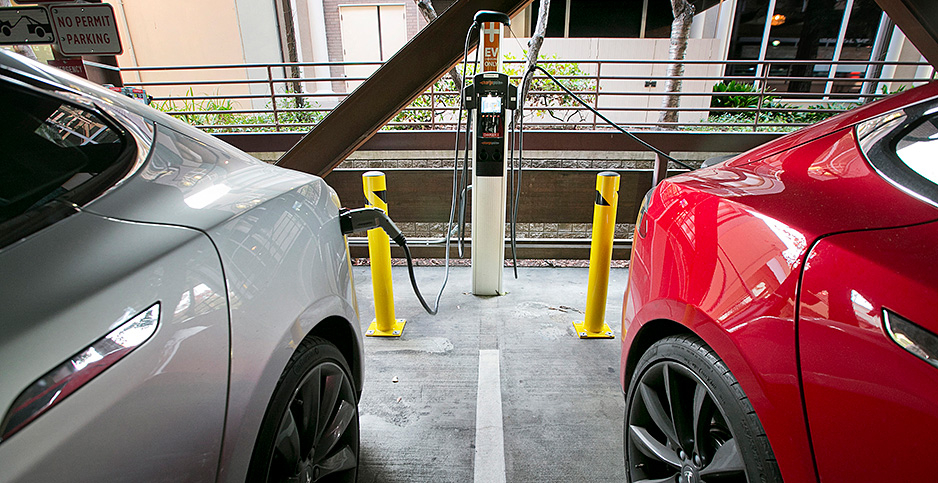 Even as anticipation builds that President Biden will go big on building electric vehicle infrastructure, a new study out of California shows the need might be bigger than anyone thought.

This study, an update by the California Energy Commission on the state’s EV charging needs, is the first to try to game out the implications of Gov. Gavin Newsom’s earthshaking order to ban the sale of internal-combustion engines by 2035.

The short answer: Charging stations will need to propagate like rabbits, and electricity demand will drastically shift.

The Golden State alone will need to have a total of 1.5 million EV chargers by 2030, or three times what Biden promised for the entire nation while on the campaign trail. It is unclear where the money will come from.

Furthermore, a massive 15% surge of electricity demand could arrive at midnight, when people are charging during off-peak hours. That could prompt a wholesale rethinking of how to move electricity around.

The conclusions show "we need to supercharge our efforts," said Nancy Sutley, the chief sustainability officer of the Los Angeles Department of Water and Power, on a webinar yesterday about California’s 2035 goal. "The needs," she added, "are evolving more quickly than we thought even a few months ago."

The California Energy Commission prepares the report every other year. This one takes stock of an EV landscape that has changed dramatically in the past few years.

California policymakers looking to dial down transportation emissions by 2035 understand that ride-hailing companies, like Uber and Lyft, have an outsize role in climate pollution. So do medium- and heavy-duty electric trucks, which are racing to market with a huge and poorly understood impact on the grid.

"They’re correctly interpreting the scale of the challenge," said Chris Nelder, an energy analyst at the Rocky Mountain Institute.

California, with its 40 million citizens and aggressive car emissions rules, has long been at the bleeding edge of clean transportation. A succession of executive orders ratcheted up its ambition on electric cars. In 2012, Gov. Jerry Brown (D) called for 1.5 million EVs on the state’s roads by 2025; in 2018, he upped the ante again, demanding 5 million EVs by 2030.

The order unveiled by Newsom (D) in September — as the state choked on smoke from a catastrophic fire season — takes the impact on fueling and the electric grid to a whole new level.

California’s experience is instructive for the rest of the country because others are starting to follow its lead. New Jersey and Massachusetts have started fashioning rules that match California’s, and Washington state is reconsidering an effort that failed last year Energywire, Feb. 14, 2020).

It is also likely to be of interest to policymakers in Washington, D.C. Last week, a new business council, the Zero Emission Transportation Association, called on the new administration to develop policies that would make it possible for all new cars to be EVs by 2030 (Energywire, Jan. 13). And yesterday, another leading EV advocacy group, Plug In America, said it would push for all new cars to be either pure electric or plug-in hybrids by 2030.

On the campaign trail, Biden promised, along with a raft of plans to electrify transportation, to build 500,000 charging stations by 2030.

If California, with 12% of the U.S. population, needs 1.5 million chargers, is Biden’s pledge even close to enough?

The need is great

The California Energy Commission report used a modeling tool to answer some difficult-to-answer questions about what the Golden State’s fueling network and electric grid would look like if auto showrooms were selling only EVs 15 years from now.

Accompanying those new vehicles will be a pileup of charging stations.

The state is hard-pressed to meet those earlier and more modest goals.

The CEC counted 121,000 chargers not yet built but in the pipeline. It doesn’t know where the 62,000 chargers needed five years from now will come from.

One reason for the shortfall is that a major source of state funding for charging infrastructure — fees on state vehicle licensing and smog checks — is heavily oversubscribed. Only one-third of proposed projects have received funds.

To be on track to have all vehicle sales be electric by 2035, the overall number of chargers rises yet again, to 1.5 million.

Even that doesn’t paint the full picture of charging needs in the state. It doesn’t include the stampede of 180,000 delivery vans, box trucks and tractor-trailers that are also on the way.

For those, California will need 157,000 charging stations. Most of them are similar to the 50-kilowatt fast-charging stations that today support Teslas and other passenger EVs on the freeway. But 16,000 of them would be extremely fast 350-kW chargers. Expensive grid upgrades are sometimes needed to supply that much juice.

Meeting the charging needs of trucks is something that fleet managers and utilities are only starting to come to grips with (Energywire, Oct. 16, 2020).

Private industry could step up to fill these yawning gaps in the charging infrastructure. But the CEC pointed out that few have figured out how to make money without government subsidies.

California is home to the most thriving electric vehicle and EV-charging business ecosystem in the country. Yet even with that heft, it hasn’t come up with a way to wring profit from delivering electrons to cars.

"Many charging service providers have not found a self-sustaining business model operable at the scale for California to achieve widespread electrification," the report said, adding that electricity sales alone won’t pay for new charging infrastructure.

On the other side of the charging station is the electric grid, and there the CEC report found roadblocks to an all-EV world.

By 2030 — again, five years short of the state’s all-electric sales goal — the state would need an additional 3,600 megawatts of power during a peak charging period starting at midnight.

That would mean absorbing an increase in electricity demand at a normally sleepy hour by up to 15% on weekdays and 16% on weekends.

"Such an instantaneous spike in electricity demand may compromise grid reliability and necessitate investment in grid upgrades, particularly in urban areas," the report warned.

Why midnight? The CEC assumed that the state would continue to use its existing time-of-use electricity rates. To steer users toward the quiet times, those rates drop precipitously at midnight.

California leads the country in using solar and wind energy on its power grid, which reduces its contribution to climate change. But unfortunately, that power is available at the wrong time.

"The vast majority" of the charging "will not naturally align with daytime solar generation," the study noted. "Electricity demand from vehicle charging will surge at midnight when off-peak electricity rates take effect, and when carbon-free electricity is not widely available."

Today, there is not an easy way to match the daytime crest in renewable energy with EVs. The report found that the amount of solar and wind energy that was curtailed in May 2019 — in other words, intentionally curbed because there was nowhere to use it — could have fueled all of the state’s EVs for the entire month.

Another curveball for the grid is demand from big trucks and vans. Unless a new paradigm is found, that fleet could add another 5,000 MW of power demand at 5 p.m., which is an hour when demand is already high as people arrive home at the end of the day.

The charging regime of an electric truck, the report pointed out, is very different from that of a Tesla Model 3 or a Chevrolet Bolt. While a passenger car is idle most of the day and can be charged at a range of times, trucks and vans are likely to drive all day and have rigid, hungry needs at night. They have less downtime to play with.

All of these headaches are challenging but not unsolvable.

The report said that better vehicle-to-grid integration is needed, including new rate structures and incentives that could shift large blocks of power to different times of day.

Bidirectional charging — the ability for a car to not just receive power but deliver it — is a potential upside for the grid. This capability is absent from Teslas but is expected in several soon-to-be-released EV models, including the Lucid Air, the Ford F-150, and a truck and SUV from new automaker Rivian.

In rural areas, where the electric grid isn’t made for big new power loads, a solar canopy with a battery and charger could work independent of power lines. In urban parking garages, a roving battery on wheels could charge almost a dozen vehicles a day.

The report said that investment by power companies is needed but did not attempt to quantify it.

Sutley, of the L.A. Department of Water and Power, implied that the EV makeover isn’t entirely the utility’s responsibility. "What is the private sector bringing to the table here, and how are we making best use of that money?" she asked.

Asked in a rapid-fire round on the webinar what was needed to meet California’s ambitious 2035 goal, the answers from some of the big names in electric vehicles signaled that they have great expectations from the Biden administration.

"Make it rain," said Sam Arons, the director of sustainabiilty at Lyft.