Anita Perry in Paris on 3rd trip abroad for agency 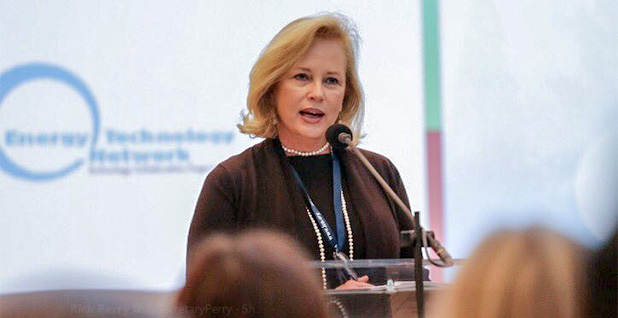 Although she has no formal role with the Department of Energy, Perry gave a speech about "women in clean energy" ahead of the International Energy Agency’s ministerial.

The former first lady of Texas made the trip to promote DOE’s "statutory missions" and spoke to IEA member countries and CEOs at the "C3E Women In Energy" event to "advocate for an increased role for women in the energy space," said DOE spokeswoman Shaylyn Hynes.

Hynes said no taxpayer funds were used to pay for Anita Perry’s travel but did not immediately specify how the trip was financed.

C3E, or the Clean Energy Education and Empowerment initiative, was launched in 2010 at the first meeting of the Clean Energy Ministerial to encourage women to pursue careers in the energy field, recognize their accomplishments and generally promote their leadership.

Perry is not listed among the 40 current C3E ambassadors, according to a list obtained by E&E News.

Organizers of the Paris event billed Perry as a former first lady and a "women and economic development advocate."

Other listed speakers included IEA Executive Director Fatih Birol; ministers of policy and energy from Sweden, Canada and Belgium; an ambassador from Italy; Japan’s state minister for foreign affairs; and two executives from Vattenfall, one of Europe’s largest electricity and heat retail producers.

Anita Perry’s DOE trips abroad have raised a number of questions among former agency officials and ethics experts at a time when investigations into the use of chartered flights are occurring across the federal government. In recent months, she has traveled as a delegate to Italy and South Africa (Greenwire, Oct. 30).

The Energy secretary applauded his wife’s speech online, while commenters questioned her qualifications, pointing to her lengthy career in nursing and health care.

"Very proud of my beautiful wife, Anita, for delivering remarks at the C3E, Women In Energy here in Paris. #usa," the secretary tweeted this morning with a photo of his wife speaking.

"Anita Perry is a nurse and has absolutely no qualifications to speak on clean energy or represent the US," replied Ubadah Sabbagh, a neuroscience graduate student at Virginia Tech.

After graduating from what was then West Texas State University in 1974 with a bachelor’s degree in nursing, Perry earned a master’s in nursing from the University of Texas Health Science Center at San Antonio and spent more than a decade as a nurse in the areas of surgery, pediatrics, intensive care, consulting and administration.

The daughter of a physician, Perry has called health care "a lifelong passion" and helped develop and host the annual Texas Conference for Women, which draws attention to women’s professional development, health care and personal growth, according to an online biography.