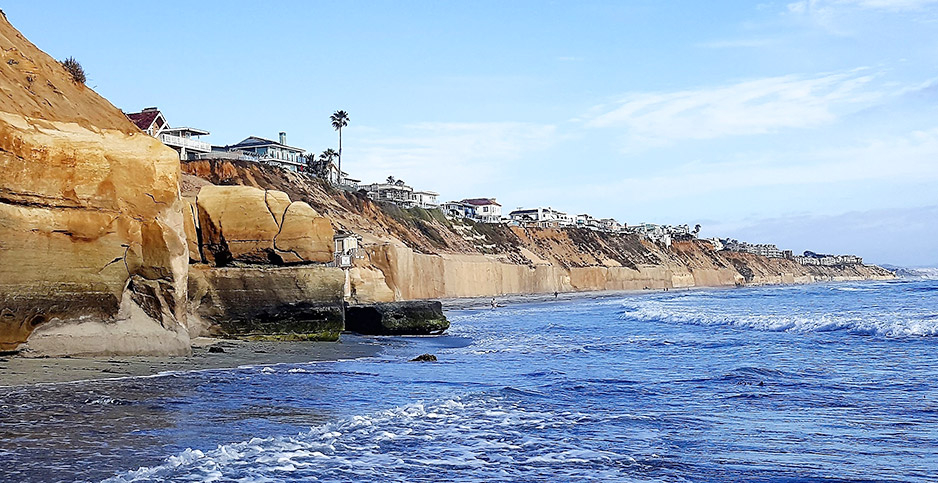 SOLANA BEACH, Calif. — It was just before sunset as Jim Jaffee walked along the beach beside a row of sea walls. Concrete was bolted against the bluffs to protect multimillion-dollar homes, perched along the top, from falling into the rhythmic tides below.

Waves rolled in. Some landed at the walls, leaving no dry sand. High tide was still a few hours away.

Jaffee, 54, called it a warning sign. A resident of this city for two decades, he said few sea walls existed around here until about 1998. Now armor covers at least half the bluffs lining the backside of this small beach.

As the ocean expands and rises because of climate change, water increasingly will cover the sand, he said, leaving no dry beach on which to lounge or watch children play.

"High tide is a pretty good simulation of what the future holds," said Jaffee, a volunteer with the Surfrider Foundation, a beach preservation advocacy group. "If sea-level rises according to the forecast we have, the beach will disappear."

Solana Beach, a tiny town in north San Diego County with 13,000 residents, is known for its shoreline cove that holds concerts in the summer. It also has an arts district that draws tourists, small Mexican-food and health-food diners, and a laid-back character.

It’s also a kind of ground zero for the impacts of climate change.

People with homes on the crumbling bluffs want to keep their walls — and add new ones — to safeguard their investments. Environmental groups argue that nature should be allowed to wear down the bluffs, clearing space that eventually would evolve into more beach.

The clash has triggered multiple lawsuits, including one now at the state Courts of Appeal. The outcome could have broad implications for rules on sea walls and the authority of the California Coastal Commission, an agency that oversees most state coastal development.

"The shoreline’s changing. Sea-level rise is happening. It’s affecting the public’s beach first," said Angela Howe, legal director with the Surfrider Foundation. "It’s definitely a hot spot for where you’re seeing the conflict between private residents and public beachgoers come to a head."

Solana Beach resident Chris Hamilton, 69, lives in a home on the bluffs and enjoys an unobstructed ocean view. He’s also chairman of the Beach and Bluff Conservancy, which represents about 950 condominium owners and 50 homeowners. The state’s Coastal Act, an expansive protection law, guarantees those people the right to defend their property, he said.

Hamilton argues that the sand in Solana Beach has disappeared over the years because of development that includes dams, harbors, bridges and piers. Those interrupt the natural flow of sand from north to south, he said.

"This problem was not caused by the people on the top of those bluffs," Hamilton said. To punish those people by denying sea walls with the goal of saving the beach, "you’re almost penalizing those that are victims of that societal development," he said. "I don’t know how anyone makes an equitable argument in that case."

The National Research Council estimates that seas on the West Coast could rise 5 inches to a foot by 2030, and 1 to 2 feet by 2050. By the turn of the century, they could climb more than 5 feet.

The impact of that water is great when it hits the sand. Consultants to Del Mar, Calif., near Solana Beach, have said 1 foot of vertical rise equals 30 feet or more of water flowing horizontally.

Temporary climate phenomena are already affecting Southern California beaches. In 2015, during an El Niño, water levels hit a record high at the San Diego Bay Tide Station. Then in November, the highest tide of the year, or "king tide," arrived.

In Solana Beach, "there was virtually no beach," said Bill Chopyk, Solana Beach director of community development. "The water, the waves were right up against the bluff, with no room for any beach at all." At Cardiff State Beach to the north, the parking lots were "completely immersed and covered in seaweed and sand."

Solana Beach recently re-examined its policies about the beach and sea walls. In 2013, it wrote a local coastal plan. The coastal commission required the addition of "a long list of amendments," Chopyk said.

The city adopted the revised plan in 2014. But the Beach and Bluff Conservancy, made up of local homeowners, challenged the new restrictions on sea walls by filing a lawsuit — even though the coastal commission had required the city to adopt them. Surfrider and the coastal commission intervened in the case, mostly supporting the city’s provisions.

Then, in December, a San Diego Superior Court judge in December largely sided with the city. The ruling upheld a policy limiting the life of a sea wall to the life of an existing structure. It also allowed for a prohibition on new walls for redeveloped buildings and said that the city can charge property owners "recreation impact fees" for the space their sea walls take up on the sand.

The judge threw out a city rule barring walls to protect gazebos, pools, tennis courts and other accessory structures. The judge also invalidated a restriction against repairing existing stairways.

The Beach and Bluff Conservancy, represented by the Pacific Legal Foundation, appealed. Solana Beach, the Surfrider Foundation and the California Coastal Commission filed their intent to cross-appeal.

The Pacific Legal Foundation, representing the homeowners, looks for cases with the potential to preserve or expand coastal property rights, said Deborah Sivas, a professor of environmental law at Stanford University.

"They’re pushing pretty hard to get something where they set statewide precedent to try to push back on the coastal commission or cities," Sivas said. In other words, they generally oppose rules seeking to limit sea walls.

If the property owners were to get a favorable decision at the Courts of Appeal or at the state Supreme Court, "you significantly handcuff what the regulators could do, either the local jurisdictions or the coastal commission," Sivas said.

Larry Salzman, attorney with the Pacific Legal Foundation, said the firm hopes this case and others will set precedents curbing rules on sea walls.

"We don’t want to see the coastal commission overreach and take advantage of private property owners merely because they abut the beach or public resources," he said.

The city follows the Coastal Act, which allows bluff armoring for private property if it’s in "imminent threat or danger of collapse," Chopyk said.

The courts and the California Legislature are looking at whether protection under the act is limited to homes owned when the law took effect, in 1977. Meanwhile, the coastal commission is applying rules that restrict some people’s ability to add sea walls, such as if they are adding onto or repairing large parts of their home.

Bluff homes worth ‘a billion dollars’

Salzman argued that sea walls are needed for the safety of beachgoers. He said five people have been killed in recent decades when pieces of the bluff at San Diego County beaches fell off.

Having sea walls "really enhances access," Salzman said. People are able to enjoy the beach below bluffs "without anxiety."

Chopyk said lifeguards at the beach frequently warn people not to sit near the bluffs because pieces have fallen to shore. There also are signs along the walls warning that it’s hazardous.

Homeowners who have sea walls are endangered by those who don’t have armor, said Hamilton, the Solana Beach resident.

"If you have a sea wall and your neighbor doesn’t, the damage that occurs moves around that sea wall," Hamilton said. "Until everyone’s protected, there’s some vulnerability."

If saving the beach is the top priority of the city or state, the governments could seek to take the property on the bluffs under eminent domain, the law that allows them to declare land is needed for a greater public good, he said.

But the government would need to pay fair market value. The 950 bluff condos are worth at least "a billion dollars" and perhaps "twice that," Hamilton said. The 50 freestanding homes are worth "a few hundred million" dollars.

"That’s not financially viable" for the city to purchase those, Hamilton said. Instead, it makes more sense to intermittently fortify the beach with sand dredged from harbors and other locations.

Solana Beach has not started work on a sea-level-rise adaptation plan, a document the coastal commission wants beach cities to complete. The city for now is focused on sand replenishment.

The work is targeted "really at the symptom more than the cause" of global warming, though Solana Beach recently adopted a climate plan, Chopyk said.

Solana Beach, along with the city of Encinitas to its north and the Army Corps of Engineers, is looking at a 50-year program to replenish sand every five years. It would last through 2068. Material would be dredged from sites located off the San Diego County coast. There’s no cost estimate, but it’s not something the city can afford alone, Chopyk said.

"We’re trying like crazy to get federal funding through the U.S. Army Corps of Engineers" for beach replenishment, Chopyk said. "We’re depending on the federal government, so yeah, there’s lack of funding there."

Federal legislation signed into law last year, S. 612, includes $91 million to address bluff and beach erosion in Solana Beach, said Calvin Moore, communications director for Rep. Darrell Issa (R-Calif.), who represents Solana Beach and Encinitas. However, the project is under administrative review by the Office of Management and Budget. Issa in May asked OMB Director Mick Mulvaney for a positive review, needed for the funds to advance.

"Erosion of the beaches and bluffs in the cities of Encinitas and Solana Beach has presented critical safety concerns in recent years," Issa wrote to Mulvaney. He added that "this project is significant and urgent for this region."

Jaffee said adding more sand is an expensive and shortsighted solution. The character of the city is at risk, he said, with the volume of sea walls as the water rises.