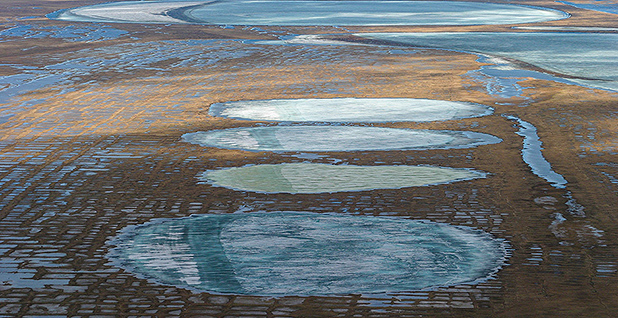 Four small lakes are pictured with remnant ice on the northwestern side of Teshekpuk Lake. Across the lake to the southeast lies ConocoPhillips Alaska Inc.'s Willow oil prospect in the National Petroleum Reserve-Alaska. Craig McCaa/Bureau of Land Management Alaska

The Biden administration is throwing its support to development of ConocoPhilips’ massive Willow project backed by Alaska Republican Sen. Lisa Murkowski in the National Petroleum Reserve-Alaska, even as environmental groups warn of that oil field’s environmental and climate risks.

The project on the North Slope had been approved by the Trump administration last October after years of analysis by federal agencies and complied with statutory requirements, the Justice Department told a federal court in Alaska yesterday.

Opponents of the project were "cherry-picking records," to suggest analyses by federal agencies had violated the National Environmental Policy Act, the Clean Water Act and the Endangered Species Act, DOJ said.

"Federal Defendants complied with the requirements of these statutes and other applicable legal requirements, and Plaintiffs’ claims should be rejected," DOJ attorneys wrote in a brief to the U.S. District Court for the District of Alaska.

The administration’s defense of the project in the 23-million-acre reserve comes after Alaska lawmakers said the project would strengthen their state’s economy. Murkowski and fellow Alaska Sen. Dan Sullivan were among four Republicans to vote with Democrats to confirm then-Rep. Deb Haaland (D-N.M.) as Interior secretary in March (Greenwire, March 15).

The Sovereign Iñupiat for the Living Arctic and the Center for Biological Diversity are opposing the project in related cases on the grounds the government had inadequately considered the environmental and public health risks of the project, including its impacts on climate change (Energywire, Nov. 18, 2020).

The Bureau of Land Management had approved the Willow Master Development Plan last fall. The project is expected to produce 590 million barrels of oil over three decades.

Project challengers had won a temporary reprieve this winter when the 9th U.S. Court of Appeals agreed to freeze some construction work on the project as challenges worked their way through the appeals process (Energywire, Feb 16).