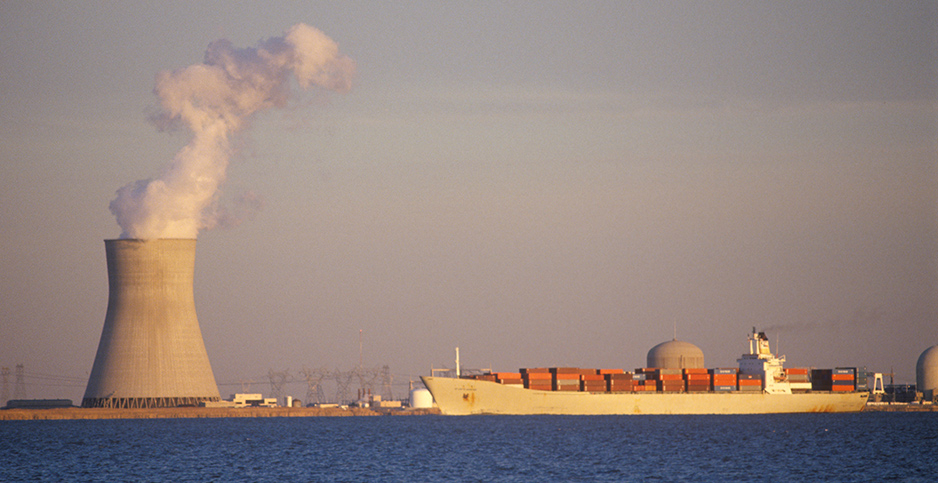 The Salem Nuclear Power Plant is pictured at Delaware Bay, N.J., in this 2008 file photo. Joe Sohm Visions of America/Newscom

When mismanagement of a nuclear plant on the Lower Delaware River forced an emergency shutdown in 1994, harsh criticism came from a junior U.S. senator whose state lay opposite the Salem, N.J., plant 3 miles away.

"For more than a decade, I have sought expanded oversight, enforcement and sanctions to make the Salem facility operate according to the law," then-Sen. Joe Biden (D-Del.) said, accusing the operator and the Nuclear Regulatory Commission of turning a blind eye to serious, repeated safety issues, including dangerously degraded reactor equipment.

Fast-forward a quarter-century, and now it is President-elect Biden who has included proposals for a new generation of nuclear reactors in his clean energy platform, parting ways with "no-nuke" progressives further to his left.

It isn’t clear how hard Biden will fight in the next few years to support the possible development of a fleet of still-experimental, billion-dollar reactors that wouldn’t come online until at least the 2030s.

A second issue centers on the 95 operating U.S. reactors, some of which may close prematurely because they are losing money, plant owners warn. Getting public support to hold on to the plants’ zero-carbon electricity has been an issue for state governors, but not the White House, so far.

In the 2020 presidential campaign, Biden focused his support for nuclear power on new designs.

At a critical point during the campaign in July, he and Sen. Bernie Sanders (I-Vt.) joined forces behind a unity climate and environmental justice platform. Drafted by former Secretary of State John Kerry and Green New Deal champion Rep. Alexandria Ocasio-Cortez (D-N.Y.), the plan promised to "create cost-effective pathways" for development of advanced nuclear technology.

"Joe Biden was the first Democratic presidential candidate who’s ever actively talked about advanced nuclear power" as part of the campaign platform, said Jeff Navin, acting chief of staff at the Department of Energy in President Obama’s first term. Navin heads governmental affairs and public policy for TerraPower LLC in Bellevue, Wash., which won an $80 million DOE contract in October to further its novel reactor design.

Navin said he does not think that Vice President-elect Kamala Harris’ reservations about nuclear power as a senator will turn into opposition as Biden’s No. 2. Harris, for example, had opposed the 2018 Nuclear Energy Innovation and Modernization Act — co-sponsored by Sen. Cory Booker (D-N.J.), her 2019 opponent in the Democratic presidential primary — citing reactor safety and nuclear waste disposal concerns.

"Things we’ve seen out of the Biden campaign and the transition team are very promising for a continuation and even acceleration of programs and policies that will support nuclear energy," said John Kotek, policy development vice president for the Nuclear Energy Institute, the industry’s chief lobbying organization. Kotek was assistant DOE secretary for nuclear energy in the Obama administration.

Richard Meserve, former NRC chairman and president emeritus of the Carnegie Institution for Science, said he believes that Biden "understands we cannot take anything that helps on climate change off the table."

David Lochbaum, former director of the nuclear safety project at the Union of Concerned Scientists, agreed, noting that Biden is "strongly behind climate change policy."

"If you’re focused on that — if you really want to solve that — you can’t rule nuclear out," Lochbaum said. "I’m not saying Biden’s going to greenlight it, but he won’t red-light anything, to keep the options viable."

But Biden will hear from environmental policy advocates and nuclear power opponents protesting that the NRC has gone too far to streamline and reduce costs of safety oversight on old reactors as well as safety reviews of new reactor designs.

"The Biden administration will have to turn first to regulatory issues and repair the damage that’s been done at the NRC over the past four years" under President Trump, said Matthew McKinzie, director of the nuclear, climate and clean energy program at the Natural Resources Defense Council.

There are still too many critical questions about new reactor designs to justify writing them into clean energy plans, McKinzie said. "We are very far from an understanding of whether they could ever be commercialized," he said.

In 2018, the NRC staff began a policy review seeking "transformational" changes in the commission’s regulatory policies to "enhance effectiveness, efficiency, and agility" of its oversight of novel reactor technologies. The initiative, a top cost-cutting priority of the U.S. reactor industry, was backed by Congress in passing the Nuclear Energy Innovation and Modernization Act two years ago.

NRC Chairman Kristine Svinicki told a congressional committee earlier this year that the commission’s goal was making progress toward the act’s goals in evolving "into a more modern risk-informed regulator," an approach she said "has contributed to the agency’s success … in reviewing applications within established schedules for new technologies or that raise novel technical issues while maintaining the NRC’s strong commitment to ensuring public health and safety."

As for the Salem plant’s 1994 shutdown, a later NRC audit cited management at operator PSEG Nuclear LLC as a cause of safety problems at the plant, which overhauled its practices in the wake of the investigation.

Others on the Biden-Harris transition team bring specific expertise on nuclear issues, including Rachel Slaybaugh, a nuclear engineering professor at the University of California, Berkeley, and a senior technical adviser at ARPA-E.

Majumdar told a Stanford videoconference in August, "Actually, I worry about nuclear.

"I am a big fan of nuclear, [but] it is becoming harder and harder for nuclear to survive," he said. If advanced nuclear plants are to succeed in the United States, their cost must be half of today’s costs per kilowatt-hour — innovation will have to do that, he added.

Congress has agreed to tackle those issues by funding research and building pilot plants that test different strategies for new nuclear power, including small modular reactors based on current technology and advanced reactors with entirely different fuel and heat management systems.

"There is a swell of bipartisan interest in Congress for advanced nuclear technology," said Matt Bowen, a Columbia University research scholar who headed an Obama-era DOE team backing development of small modular reactors, a leading contender among the new technologies.

Among other reasons, backing advanced nuclear technologies is a "quiet" way for some Republicans in Congress to show support for power plant carbon emissions reduction, Bowen said.

And a core group of congressional leaders from both parties, fearful of China’s technological advances, doesn’t want the United States to be a global loser with new reactors.

"Republicans have a long history of supporting nuclear technology, and Democrats have really come around in the last number of years" to that view as a way to meet the climate challenge, said Navin of TerraPower.

The Nuclear Energy Innovation Capabilities Act in 2018 funded the National Reactor Innovation Center at DOE’s Idaho National Laboratory to speed research on new fronts like high-temperature reactors that could energize water desalination and production of hydrogen as a fuel.

"In the face of Russian and Chinese aggression, it’s critical we remain the world’s leading developer of nuclear energy technology," Barrasso said, framing the legislation as a national security imperative.

Instead of making a security argument to boost its case, TerraPower touts the clean energy credentials of the Natrium reactor it is developing with GE Hitachi Nuclear Energy. The cost-sharing grant was from the Advanced Reactor Demonstration Program, given $230 million by Congress in fiscal 2020.

In addition to producing electricity, the reactor stores heat in a reservoir of molten salt that can be tapped to generate steam and electricity on demand, filling in when wind or solar power output drops but demand is still high. "That allows you to integrate that system into grids that have high penetrations of wind and solar," Navin said.

Once he’s sworn in, Biden can let Congress take the lead, some industry strategists say. But if spending options grow tight in the next Congress, there will be hard choices.

NEI’s Kotek said the support new nuclear technologies have received so far is just a start. "What we need to do is make as much progress as we can on all these technologies" so that utilities can select which ones they want by the end of this decade, Kotek said.

"To see those technologies really flourish in the U.S., we need to move beyond R&D," he added. Zero-carbon power from nuclear plants will need tax credits and other market support to compete with wind and solar, he said.

But Meserve, the former NRC chairman who is leading a National Academies of Sciences, Engineering and Medicine committee on opportunities and barriers to commercialization of new and advanced nuclear energy technologies, warned that there isn’t enough funding for pilots on all ideas — each of which may be at different stages of maturity.

"Where do you put the money?" he asked. "There is really a policy challenge on sorting this out, and as much as people hate to pick winners, there has to be a way to make decisions [on the choices] under conditions of great uncertainty."