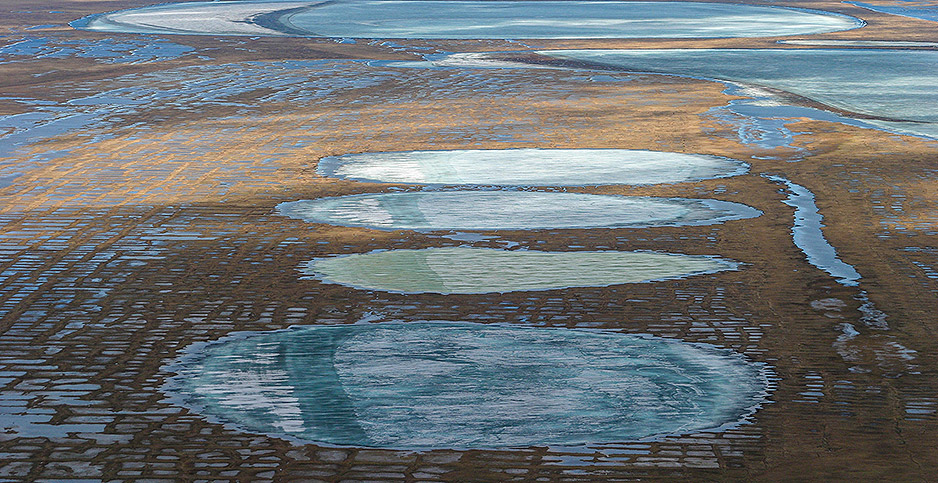 Four small lakes are pictured with remnant ice on the northwestern side of Teshekpuk Lake. Across the lake to the southeast lies ConocoPhillips' Willow oil prospect in the National Petroleum Reserve-Alaska. Craig McCaa/Bureau of Land Management Alaska

Environmentalists pledged to fight the Biden administration’s defense of a $6 billion oil and gas project on Alaska’s North Slope, setting up a conflict with green groups that have largely cheered the Interior Department’s newly tougher stance on fossil fuel extraction on public lands.

ConocoPhillips’ massive Willow project could produce up to 160,000 barrels of crude per day at its peak and would pump oil from the largely untapped National Petroleum Reserve-Alaska (NPR-A) for 30 years.

A judge in the U.S. District Court for the District of Alaska has barred the Texas oil giant from starting construction until this winter, as she considers lawsuits brought by several environmental and Indigenous groups. They’ve argued that a federal environmental review undertaken by the Trump administration failed to consider the climate impacts of the project and its potential to harm protected wildlife like polar bears.

Yesterday, the Justice Department filed a brief defending ConocoPhillips’ work and Interior’s environmental review process (Energywire, May 27). Attorneys wrote that the consortium of environmental groups that had brought the lawsuit were "cherry-picking records," to support their claims and asked that the court — at most — send the environmental analysis back to federal agencies for improvement, rather than throw out the government’s approvals of the project.

"At a time of economic recovery, we welcome the Biden administration’s acknowledgement of the environmental safety of this project, which will bring good-paying jobs and much-needed economic opportunity to local Alaskan communities," said Kevin O’Scannlain, the American Petroleum Institute’s vice president of upstream policy.

Environmental groups are digesting what it means that the Biden administration seems to have thrown its weight behind an expanded oil footprint on federal lands.

"The Willow Project squeaked in at the end of Trump’s presidency. Why is the Justice Department giving it a lifeline?" Hallie Templeton, deputy legal director at Friends of the Earth, asked in a statement.

This bewilderment is in part due to the Biden administration’s stance on the federal oil and gas program thus far.

The president froze the sale of new oil and gas leases on federal lands and waters shortly after taking office. And he ordered a review of the federal oil program in light of climate change, which could lead to higher royalty rates and restrictions on where oil and gas activity can and can’t proceed on public lands.

Nowhere has the future of federal oil development been as contested than in the Arctic. Biden suspended all oil and gas activity in the Arctic National Wildlife Refuge in January pending another court case accusing the Trump administration of violating federal law. And the president ordered a review of the Willow project just hours after taking office.

She added: "Unfortunately, the decision to defend a Trump-era project that ignored the concerns of local Indigenous communities and failed to adequately address risks to our climate future is just incredibly disappointing and a decision we will continue to fight."

Village leaders in Nuiqsut, the Native community closest to the Willow project area, have also raised concerns about the industrial expansion and once asked the Trump administration to slow down its approval process (Greenwire, Feb. 24).

Rosemary Ahtuangaruak, a Nuiqsut resident, yesterday said in a statement: "The village spoke in opposition, and the greed for profit should not be allowed over our village."

Mainstream environmental groups have largely been shoulder-to-shoulder with the Biden administration as it examines the future of oil and gas development in the country. Biden’s choice to lead Interior, Secretary Deb Haaland, was a vocal critic of drilling in the Arctic and, when she was still a House lawmaker, signed a letter asking the Trump administration to back off on Willow and consider the cumulative impacts of the project on the Native community closest to the project (E&E Daily, May 5).

Haaland’s stance was questioned by influential Alaska Sen. Lisa Murkowski during her confirmation process on Capitol Hill. Murkowski — a Republican who fought to expand federal oil and gas access to replace the declining oil reserves on Alaska’s North Slope — pressed Haaland to acknowledge the importance of the Willow project in particular. Haaland said she intended to listen to those concerns if confirmed as secretary.

Murkowski ended up voting to confirm Haaland as secretary, saying she knew the first Native American Cabinet member had the support of her Alaska Native constituents.

An Interior Department spokesman today said little about the Justice Department’s filing in a short statement provided to E&E News.

"The filing maintains that the decision complied with NEPA standards in place at the time, and that the plaintiffs did not challenge the Record of Decision within the time limitations associated with environmental review for projects in the NPR-A," it said.

Meanwhile, the Alaska Oil & Gas Association credited the work of the state’s elected leaders in advising the Biden administration on Willow.

"We appreciate President Biden and his team listening to Alaskans and thank them for taking an objective look at the Willow project and evaluating it on its merits," Patrick Bergt, regulatory and legal affairs manager at the AOGA, said in an email. "This news is also proof that the more our leaders learn about Alaska’s strong track record of safe and responsible energy production, the more they understand our commitment to it."

Conoco first announced the massive Willow discovery in 2017, marking an uptick in excitement for the North Slope, where a long history of oil and gas riches to undergird the state economy appeared to be in decline.

The company’s leadership in Alaska began pushing for a more flexible federal management plan for the NPR-A to allow for more development in the direction of the discovery.

Prior to the oil discovery, the Obama administration had expanded protections in the potentially oil-rich Teshekpuk Lake area, a wetlands region along the Arctic coast that serves as habitat for caribou herds, migratory birds and polar bears.

The Trump administration obliged with an overhaul of the NPR-A’s Integrated Activity Plan that opened more than 80% of the reserve’s mineral estate to potential oil and gas development. That plan was finalized at the tail end of President Trump’s time in office (E&E News PM, Jan. 4).

Industry cheered the expansion, which carries stipulations on where industry can disturb the surface, how it operates on the sensitive tundra, and where and when it can drill.

The Bureau of Land Management estimates that the project could produce 586 million barrels of oil over its lifetime.