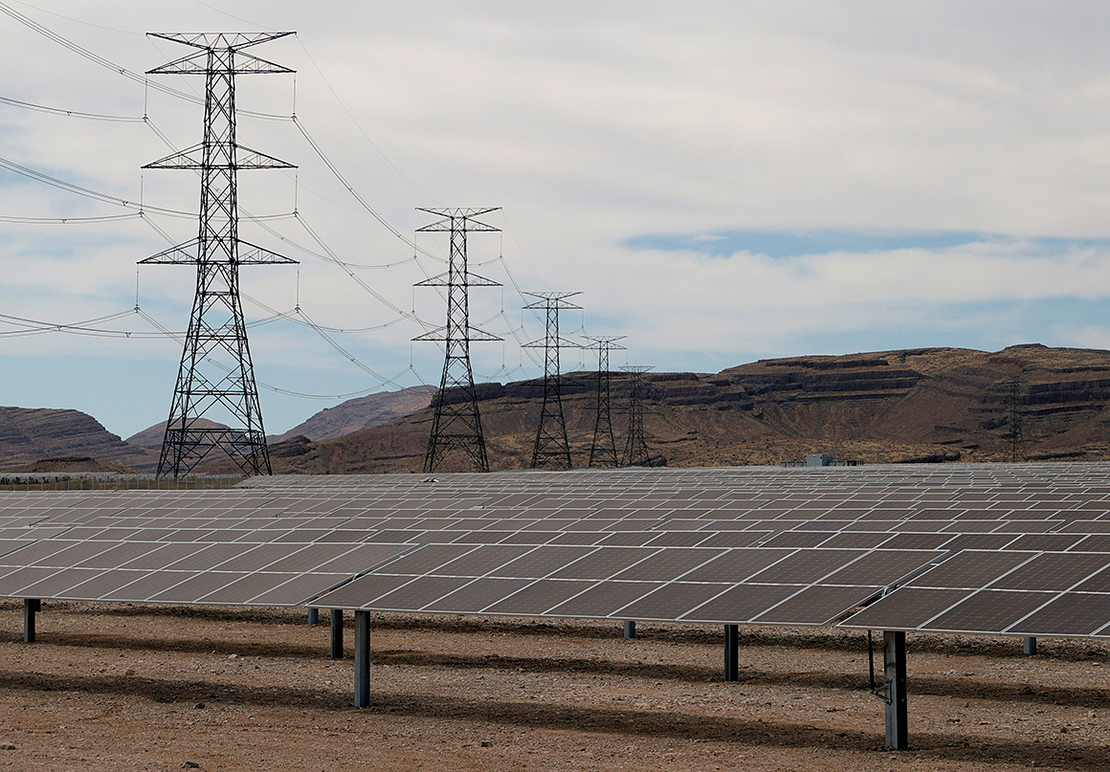 Transmission towers are shown near solar panels from the 100-megawatt MGM Resorts Mega Solar Array after it was launched on June 28, 2021 in Dry Lake Valley, Nevada. Ethan Miller/Getty Images

The Bureau of Land Management has authorized construction to begin on the third of three large-scale solar power projects inside a California renewable energy zone.

The 500-megawatt Oberon solar project would cover about 2,600 acres inside the 22.5-million-acre Desert Renewable Energy Conservation Plan area and have the capacity to power about 146,000 homes. The project includes a battery storage system of up to 200 MW.

The agency last year approved the first two large-scale solar power projects in the area — the Arica and Victory Pass photovoltaic solar projects covering 1,300 acres and with a collective capacity to produce up to 465 MW of electricity (E&E News PM, Dec. 21, 2021).

Construction on the Oberon project could begin this month. It’s not clear when the solar project will be completed and put into operation.

The Biden administration today touted the Oberon photovoltaic solar project as a “milestone” in the administration’s ongoing efforts to permit 25,000 MW of solar, wind and geothermal power projects by 2025, as well as a broader goal to wean the nation’s power grid off fossil fuels.

It also illustrates the current administration’s commitment to balance renewable energy and other uses inside the energy zone.

The Desert Renewable Energy Conservation Plan area, which is a partnership between BLM and the state of California, includes public and private lands in the Mojave and Colorado deserts, and is designed to ensure that commercial-scale solar, wind and geothermal power projects are balanced with conservation, recreation and other uses of public lands (E&E News PM, Sept. 14, 2016).

Former President Donald Trump’s administration wanted to expand the amount of land deemed suitable for energy production within the area. The Interior Department during the final days of Trump’s presidency released a draft plan that would have removed millions of acres of designated conservation areas inside the zone in the name of ramping up energy production (E&E News PM, Jan. 13, 2021).

“The BLM is committed to responsible renewable energy development that balances conservation and utilization of public land,” Mouritsen said.

BLM said in press materials today that it is processing 64 utility-scale onshore renewable energy projects in the West, including gen-tie power line projects allowing the green energy projects to connect to the electric power grid.

If all are built, they have the capacity to add more than 41,000 MW of electricity to the Western power grid, BLM said.

Correction: The photo on this story was changed after publication. The cutline on the original photo incorrectly described a solar energy project.