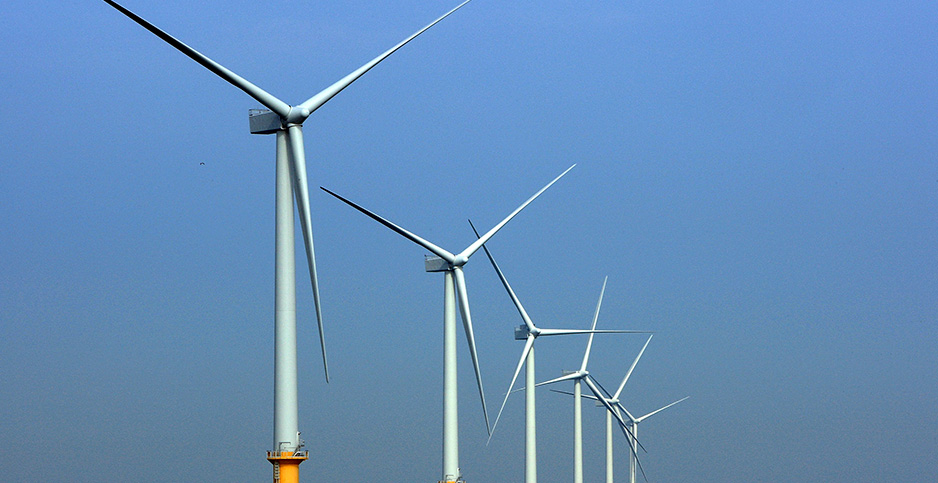 The Interior Department announced a lease sale in the on the outer continental shelf in the New York Bight. Christopher Furlong/Getty Images

The Biden administration published a preliminary sale notice today for a wind auction off the coasts of New York and New Jersey.

The New York Bight leases would support up to 7 gigawatts of offshore wind energy — enough to power about 2.6 million homes.

The proposal includes provisions to help commercial fishers — vocal critics of offshore development — including the designation of large lanes to ease navigation for fishing boats.

The Bureau of Ocean Energy Management (BOEM) hasn’t yet provided a date for the New York auction or a detailed description of the areas that will be in the final sale. Those specifics will be included in a final notice for the sale, which will follow a public comment period.

The New York sale will add to the list of President Biden’s actions to advance offshore wind, an energy sector driven in recent years by state climate targets and falling development costs. The administration has committed to giving the industry a boost by speeding a federal permitting process that’s previously delayed projects. Biden has set a goal to reach 30 GW of offshore wind energy by 2030.

"The Biden-Harris administration recognizes the urgency of this moment, and the development of renewable energy resources is an important piece of addressing this reality," Interior Secretary Deb Haaland said in a statement.

"Today’s announcement of new proposed lease stipulations puts a priority on creating and sustaining good-paying union jobs as we build a clean energy economy," she said.

The agency noted that it’s not yet firm on transit corridors for other lease areas and warns bidders that a final sale may include those lanes.

Broad transit corridors were a frequent request from fishermen in New England lease areas, where developers instead agreed to a uniform pattern that separates turbines by a nautical mile. Buoyed by a Coast Guard study supporting that pattern as safe for navigation, the uniform layout has, nevertheless, remained a point of contention with fishing groups that say they aren’t wide enough.

Annie Hawkins, executive director of the fishing group Responsible Offshore Development Alliance, said she was encouraged by some of the new provisions for fishermen, including a requirement that developers consult with other ocean users in the lease area prior to proposing specific wind farm designs.

But she also noted several concerns about the growing offshore wind footprint.

"We maintain that rushing to lease additional areas beyond the thousands of square miles already slated for development of this new ocean use is misguided and dangerous — particularly in the Bight which is perhaps the most spatially conflicted area in the country," she said in a statement. "Very little is known about the ecological, economic, safety, and socio-cultural effects of offshore wind at this scale."

The New York auction to come will cover three wind energy areas: Hudson South off New Jersey; Hudson North, just south of Long Island; and the Central Bight area. The agency has divided these areas into several individual leases that will be for sale.

Two other wind energy areas considered by BOEM for a New York Bight sale may still be auctioned to offshore wind developers but have been removed from consideration for the upcoming auction to address conflicts with other ocean users.

Eleven offshore wind developers have already expressed interest in bidding in the New York auction and have been determined qualified by BOEM.

"As coastal states with massive populations and large economies, New York and New Jersey are integral to the development of American offshore wind," he said in a statement.

Milito pointed to research from Wood Mackenzie that found wind energy leasing in New York Bight could drive some 32,000 jobs a year with more than $45 billion in capital investment.

"A lease sale not only opens a door to investment in New York and New Jersey but will support jobs and businesses throughout the U.S," he said. "Providing new offshore wind opportunities will boost critical investments into the supply chain, ports, and workers, and will provide a foundation for exceptional offshore wind growth."