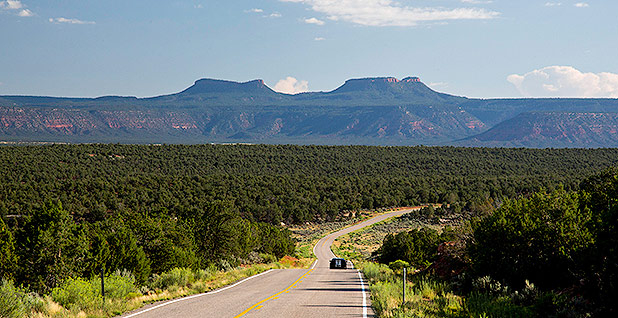 In a statement posted to its website and social media accounts last week, the Bundy family criticized President Obama for his late-December decision to create the 1.35-million-acre Bears Ears and 300,000-acre Gold Butte monuments (Greenwire, Dec. 28, 2016).

"We, the Bundy Family, would like to say to President Obama that we are saddened, but not surprised, by the your [sic] decision to make our ranch and home a national monument," the family wrote. "If any of this were really about protecting the land, you would come here, work with the local people who love this land, those who have a vested interest in this land, and take the time to learn what this land really needs. This is about control, pure and simple."

The Bundy statement criticized the new monuments as "federal overreach" and urged Nevada Attorney General Adam Laxalt (R) to "fight this to the fullest extent of the law."

Utah Attorney General Sean Reyes (R) has already vowed to challenge the Bears Ears monument with a lawsuit, reiterating his pledge moments after being sworn into his new office yesterday.

Ammon Bundy, who is in federal custody awaiting trial next month over a 2014 Nevada standoff with federal agents, also criticized the new monuments in a live Facebook video Saturday.

Bundy, who could be heard speaking on telephone but not seen, accused the Obama administration of an "arbitrary, unlawful act" for designating the new federal lands.

"It appears our government is acting outside the Constitution once again, and we must stop it. The Constitution is the law, and we cannot be a free people with a lawless government," Bundy said.

Ammon Bundy and his brother Ryan were acquitted of charges last year related to their occupation of the Malheur National Wildlife Refuge in Oregon but remain in custody to face charges related to the 2014 incident in which armed ranchers and militia blocked federal law enforcement officers and BLM officials from removing Cliven Bundy’s cattle from public lands, where they have been illegally grazing.

"We must not allow these monuments to take place," Ammon Bundy said Saturday, stating that the new federal lands are "exactly how the wicked gain control of the people."

He added: "The battle for liberty is right here on our land. It is right now."