Can offshore wind revive U.S. ports? This town hopes so 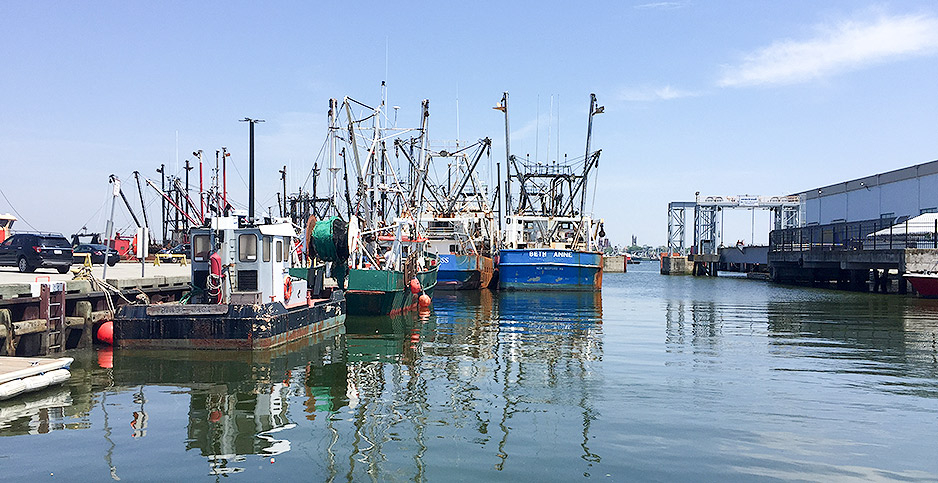 Officials in New Bedford, Mass., are focused on integrating the wind industry into America's leading fishing port. The city's fishermen hauled in more than $320 million worth of fish in 2014 and 2015, more than any at other port in the country. Benjamin Storrow/E&E News

NEW BEDFORD, Mass. — This salt-caked fishing port has been flush with wind prospectors ever since Massachusetts legislators passed a law for massive wind development in the shallow waters south of Martha’s Vineyard.

Ed Anthes-Washburn, a local port official, estimates he gives five harbor tours a month to wind industry representatives. Planning for the industry’s arrival now occupies much of his time, alongside proposals to redevelop several old industrial sites and a Seattle-style fish pier.

"It started Aug. 8, the day the governor signed the bill," Anthes-Washburn said, gazing out over the harbor here, where a mass of fishing trawlers, scallopers and clam boats formed a rocking forest of rigging and nets. "It’s been pretty consistent since then."

States up and down the Atlantic coast are rushing to become the capital of America’s burgeoning offshore wind industry, hoping the massive turbines will breathe new life into ports mired by a shrinking fishing industry and a flagging industrial base.

Maryland officials last month approved renewable energy credits for two developments totaling 368 megawatts off their shores in a bid to transform Baltimore and Ocean City into the industry’s manufacturing and maintenance hub in the Mid-Atlantic (Climatewire, May 12).

Lawmakers in New Jersey are counting down the days until Gov. Chris Christie (R) leaves office early next year, when they plan to restore their own credits for offshore wind developments (Energywire, June 9).

But few places are betting on offshore wind quite like New Bedford.

This blue-collar city of roughly 95,000 people on the south coast of Massachusetts is the closest commercial port to one of the best offshore wind resources in North America, according to the National Renewable Energy Laboratory. And where offshore wind development has struggled in the past, the ocean is now open for business. Three companies have secured federal leases for projects 14 miles south of Martha’s Vineyard.

New Bedford officials have wasted no time positioning their city as the port of choice for the emerging industry. Massachusetts has invested $113 million in the New Bedford Marine Commerce Terminal, a 26-acre parcel designed to withstand the heavy loads needed to accommodate large wind turbines.

A consortium of local colleges has created a curriculum to prepare students for the day that specialized watercraft is needed to ferry technicians out to the hulking turbines. And state and local officials are busy hosting workshops intended to create an onshore supply chain to serve the growing industry.

There are even a few signs of the industry’s presence in New Bedford Harbor. On a recent day, the Ocean Researcher, a survey vessel belonging to the Danish wind giant Dong Energy, was preparing to cast off from the marine commerce terminal.

"This is the largest commercial fishing port in the United States. Our people know what they’re doing out in the mid-Atlantic. We have all those things going for us," said New Bedford Mayor Jon Mitchell.

"For us, the offshore wind industry represents a strong diversification play," he added. "This is an industry that will be around for the foreseeable future. It will be the source of a variety of types of jobs. And we want to play up our attributes and make the most of the opportunity. It isn’t an end-all, be-all. It’s more about diversifying our industrial base."

Europe’s decaying fishing ports offer a tantalizing example of what New Bedford could be. Ports along the United Kingdom’s eastern coast have witnessed £400 million ($512 million) in investment related to wind development since 2011, according to a 2016 report commissioned by the Offshore Wind Industry Council.

Dong, the world’s largest wind developer, plans on investing £6 billion in the Humber region on the United Kingdom’s east coast by 2019. The company estimates its developments in the North Sea will create 1,600 construction jobs and 500 long-term jobs in a region that has been devastated by the fishing industry’s decline. Siemens AG recently opened a £310 million blade factory in Hull, one of the Humber’s largest communities, creating 1,000 jobs.

‘A new life,’ but risks loom

The appeal is obvious in a city like New Bedford, where fortunes rise and fall with the price of scallops and the unemployment rate stands at 7.2 percent, almost double the Massachusetts average.

"If you read their history, it’s like reading New Bedford’s history," said Paul Vigeant, who doubles as Bristol Community College’s vice president of workforce development and the director of the New Bedford Wind Energy Center. "Once the proud whaling capital, then the fishing capital of the U.K. until they lost the cod war to Iceland. And now they find themselves the closest port to the offshore wind sites, and they’ve got a new life."

But where Europe’s offshore industry has boomed in recent years, its American counterpart remains in its infancy. Europe has installed more than 3,500 turbines capable of generating about 12,600 MW of power, according to a report by WindEurope. Five turbines capable of producing 30 MW off Rhode Island represent the extent of the U.S. industry.

Few are predicting a boom in wind jobs here anytime soon. Turbine manufacturing is likely to remain in countries like the United Kingdom and Germany for the foreseeable future, with North American developers expected to import blades from Europe.

"If you look to European experience, offshore wind has been deployed from a number of port facilities in the North Sea, which have been transformed from sleepy shipping ports to thriving industrial centers," said Deepwater Wind CEO Jeff Grybowski. "That’s not going to happen here overnight. We do not have enough scale in the region."

Still, offshore wind represents a return of sorts to New Bedford’s energy past. The city was one of America’s leading whaling ports during 19th century, when whale oil was used for lighting and lubrication. Herman Melville famously embarked from the port on a whaling odyssey that became the basis for "Moby-Dick."

New Bedford today can boast some bright spots. Coffee shops, brew pubs and art galleries line the cobblestone streets in the city’s historic downtown. And while the fishing industry has declined across the Northeast, much of what remains has consolidated along New Bedford’s warren of wharfs.

In 2014 and 2015, New Bedford’s fleet hauled ashore more than $320 million worth of fish, more than any other American port, according to the National Oceanic and Atmospheric Administration. Scallops are responsible for much of that bounty, accounting for 80 percent of the value of New Bedford’s catch.

Still, the community has not escaped the maladies of other fishing towns. The groundfishing industry has been decimated in recent years. Local wages lag behind state benchmarks. And city officials must confront skepticism born from chasing past economic chimeras.

Plans for a casino and Olympic sailing, a proposal tied to Boston’s aborted bid to host the 2024 summer Olympic Games, have come and gone. This isn’t even the first time offshore wind has been tried.

The marine terminal was initially built to serve the ill-fated Cape Wind project in Nantucket Sound. But when the two utilities with agreements to buy power from the 130-turbine wind farm pulled out in 2015, the terminal was widely panned as a waste of taxpayer funds.

Then there’s the tension between New Bedford’s old and emerging industries. The city joined a lawsuit last year against an offshore wind development along the New York coast, saying the project was sited in prime scalloping waters. The city’s argument: Wind is good, but turbines need to be properly sited in order to coexist with the fishing industry.

"I think the fishing industry is naturally skeptical. In the last several decades, changes in regulations have not gone their way," said Anthes-Washburn, the port official. "I think there are concerns about what will happen when the windmills go up."

But there is noticeable excitement in the city, as well. At No Problemo Taqueria, where diners were lining up for tacos and burritos one recent afternoon, a sign hung in the window showing five turbines and the word "YES."

Some of the skepticism in the community is understandable, Nuno Pereira said as he manned the cash register.

"This area has been down in the dumps for a while," he said. Wind, Pereira added, could help turn that around.

"I think it’s the future," he said. "Progress just plods along."

State and city officials are similarly optimistic that this time is different. Unlike Cape Wind, which would have been visible from the shore, developments proposed today are at least 14 miles south of Martha’s Vineyard, where they cannot be seen by the naked eye.

The federal leasing process off the coast of Massachusetts was designed to address the concerns of fishermen, siting turbines outside prime fishing grounds, shipping channels and migratory paths.

Today’s turbines are also bigger, capable of producing 6 to 8 MW of power. That is up from the 3.6-MW turbines proposed by Cape Wind.

Costs are falling as a result. A University of Delaware study of Massachusetts’ wind proposals predicted that costs could fall from 16.2 cents per kilowatt-hour in 2023 to 10.8 cents per kWh in 2029, when accounting for transmission. Cape Wind, by contrast, projected costs of 24 cents per kWh.

But by far the biggest change is the legislation passed in Massachusetts last year. It requires utilities to purchase 1,600 MW of offshore wind, enough to power a quarter of Massachusetts homes. The Massachusetts Clean Energy Center estimates that the turbines will reduce annual greenhouse gas emissions by 2.4 million tons.

Just as importantly, the law effectively creates a market for offshore wind at a time when many of the aging coal, oil and nuclear units that underpinned New England’s electric grid are retiring (Climatewire, May 30).

"The appetite and interest is there, and it’s real," said Thomas Brostrøm, who leads Dong’s North American operations.

The proposed wind area’s proximity to load centers like Boston; the relatively shallow waters of the continental shelf off Massachusetts, where ocean depths range from 90 to 180 feet; and consistent wind speeds averaging more than 20 mph make the region particularly attractive, he said.

"It looks similar to northwest Europe. That can be a benefit to a region like New England. Others led the way," Brostrøm said. "I am bullish."

The Danish-based company is one of three developers that have leased tracts of ocean south of Martha’s Vineyard and are competing to win the Massachusetts contract. Vineyard Wind, a partnership of Avangrid Renewables and Copenhagen Infrastructure Partners, and Deepwater Wind of Providence, R.I., are the other two companies.

The three candidates are expected to submit bids for a first round of development consisting of at least 400 MW later this year, though they are allowed to also submit alternative bids ranging from 200 to 800 MW. State regulators will sign off on a final contract by Nov. 1, 2018. Operations are expected to begin around 2020.

New Bedford officials’ immediate focus is positioning the city as an operations and maintenance hub for the industry.

They are busy developing land-use plans to accommodate the wind and fishing industries in a port that already hosts 700 working boats. Economic planners, meanwhile, are rushing to ensure that the region is prepared to serve wind companies when construction starts. Bristol Community College is offering a new academic program for students aspiring to become wind technicians. And the Massachusetts Maritime Academy is updating its vessel safety curriculum to serve the industry.

"We’re in Titusville in 1810 where they found oil. We’re at the cusp of creating a new base industry for the United States," Vigeant said. "Part of the exciting thing for this area is we’re closest to the biggest and best place in North America. So it’s kind of a good deal."