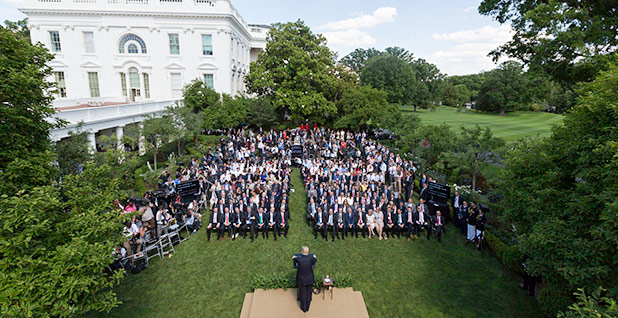 President Trump announced in the White House Rose Garden last week that the United States would withdraw from the Paris climate agreement. @WhiteHouse/Twitter

When President Trump withdrew the United States from the Paris Agreement last week, his critics said he effectively abandoned U.S. efforts to be the world’s leading developer of clean energy technology.

Clean energy is already a bona-fide global industry, one that drew $349 billion in new investment in 2015, according to Bloomberg New Energy Finance. Technologies such as conventional wind turbines and rooftop solar panels have established leaders and supply chains. But other technologies remain up for grabs, such as high-capacity energy storage, while a longer list of cutting-edge but far-fetched energy technologies compete for the money, time and space to develop.

So if the United States completes its exit from the Paris climate accord, where would that leave it?

Could it still hope to be a leader in terms of deployment, jobs or intellectual property? Or would it watch those go to China and Europe, as Trump’s critics suggest?

Energy storage is a hot new industry, and America has become its innovation engine — creating some of the best new products, software and business models that are starting to make energy storage a moneymaker.

Less stellar has been our record at holding on to that innovation edge. In the last few years, U.S. startups have been snapped up by foreign buyers, especially from Europe, where the big energy companies seem to grasp the market potential of energy storage better than America’s do (Energywire, March 20).

Some speculate that Trump’s yanking the United States out of the Paris Agreement will cause other countries to view U.S. energy companies with the same skeptical filter they apply to Trump.

"Pulling out of the Paris Agreement will bias foreign governments against U.S. firms, making it harder for American companies to sell their expertise around the world," said Jigar Shah, a storied U.S. solar entrepreneur.

But those countries are also probably savvy enough to know that American business and the American government are not necessarily the same thing, especially when it comes to climate policy in the Trump era (Energywire, June 2). — David Ferris

Pulling out of the Paris Agreement will have little impact on the U.S. nuclear industry, which is struggling to restart after remaining dormant for roughly 30 years.

Nuclear is a carbon-free form of energy that, in theory, would have been incentivized under a global agreement to cut greenhouse gas emissions. But the United States has struggled to keep down the cost of building modern reactors, and that is dampening the prospect of future U.S. nuclear expansions.

The nuclear industry is a global one, and projects in other countries are still waiting to get built. More than 60 nuclear reactors are being built in 13 countries including China, South Korea, the United Arab Emirates and Russia, according to the World Nuclear Association. But they’ll likely use technology and parts from countries such as South Korea, Italy, China and Japan.

Quitting the Paris Agreement isn’t expected to mean permanent job losses in the United States, where Westinghouse Electric Co. just declared bankruptcy. For U.S. workers and craft laborers on-site at nuclear projects in Georgia and South Carolina, prospects are good they’ll find other high-tech construction jobs in other sectors of the economy.

With Paris off the table, U.S. companies that want a piece of the nuclear industry will have to develop new technology and streamline a heavily regulated U.S. industry with the strictest safety standards.

What’s more, the transformation of electricity could give rise to small nuclear reactors and other technologies. Large, baseload reactors could be a thing of the past. — Kristi E. Swartz

It’s never been a secret who’s in charge of the global offshore wind industry, and Paris can’t change that. European-domiciled companies — chiefly in Denmark, Germany and the United Kingdom — have been at it for decades. Even General Electric Co. makes parts in France.

Now that Maryland, Massachusetts and New York want to build thousands of megawatts of offshore wind, the question is whether the parts need to be made here. New factories cost tens or hundreds of millions of dollars, and so far the industry has said it needs to see bigger commitments (Energywire, April 24).

There is one area where the United States could still seize the lead: floating turbines, which would bob on the ocean surface instead of being driven into the ocean floor. Engineers are still trying to figure out the most cost-effective technology. California is interested, as it has a 50 percent renewable power target for 2030 and has a seabed too deep for standard technology. — Saqib Rahim

In or out of the Paris Agreement, Trump’s move is unlikely to have any impact on U.S. dominance in natural gas extraction.

While shale gas has upended U.S. energy markets, relatively little shale gas exploration and production is occurring beyond North America. China has struggled to develop its own domestic shale gas reserves with gas prices low. Algeria once boldly declared its intent to become a shale gas powerhouse, but to date little has come of that announced initiative. Argentina is looking to develop mainly shale oil but also some shale gas from its Vaca Muerta formation.

Fracking out of gas basins in Texas, Oklahoma and Pennsylvania has had a global impact. Around 2005, the U.S. government and industry expected a rush of liquefied natural gas imports to meet rising U.S. gas demand. But in recent years, investments in ports to import LNG went bust as domestic shale gas supplies soared. Those import centers are being retooled as LNG export hubs, adding the United States to a growing list of global gas suppliers, upending the Middle East’s dominance.

A transition away from oil- and coal-fired power generation has been a major contributor to a decline in U.S. greenhouse gas emissions. Natural gas has in most cases been the fuel to replace coal. For its part, Europe is trying to diversify its supply of gas. Though energy demand in Europe isn’t expected to expand by much, more U.S. LNG is expected to head to Europe, with or without U.S. participation in an international climate treaty. — Nathanial Gronewold

Trump’s nixing of the Paris Agreement won’t do much by itself to tip the scales of U.S. solar power. It’s Trump’s other decisions, involving trade and research funding, that are likely to have a much larger impact.

Solar has become the fastest-growing source of new electricity and created hundreds of thousands of jobs not because of international accords but because its prices have finally dropped to the point where it’s competitive with even the bargain-basement prices of natural gas.

But those prices face new uncertainty because of a tariff proposal now wending its way through the U.S. International Trade Commission. Domestic manufacturing of basic solar materials has withered in recent years because of cheap imports. In response, manufacturers have appealed directly to Trump to raise trade barriers. If Trump does so, the result could be pricier imports that slam the brakes on solar growth.

What is more likely to restore America’s role in manufacturing is the creation of products and methods that essentially restart the industry and erase Asia’s entrenched lead. That’s why many in the solar industry are dismayed by Trump’s steep cuts for research funding, which could lead to just that kind of breakthrough. — David Ferris

U.S. companies dominate natural-gas-fired turbine manufacturing and exports, though they share a slice of the pie with European and Japanese rivals. International energy experts anticipate that a global shift away from coal toward greater gas-fired generation would drive global greenhouse gas emissions reductions.

In international trade, the United States exports more gas turbine technology than it imports by almost tenfold. According to the Census Bureau, exports of gas turbines last year were valued at some $5.1 billion. Imports were estimated at a little under $590 million in 2016. But recent data suggest the United States’ global lead in gas turbine technology may be slipping. The U.S. has seen rising imports of smaller gas turbines in recent years as foreign companies pick up market share.

Analysts at ICF warned that foreign governments and companies are increasingly focusing on investments in advanced gas turbine technologies and that the United States is poised to fall behind unless companies invest in research and development.

Paris or no Paris, carbon capture and storage (CCS) technology faces the same problem it always has: The technology hasn’t advanced far enough to become a real option for fighting climate change.

Why? Because no one yet knows how to burn coal, capture all of the CO2, then store or reuse the gas, all in a way that makes commercial sense. It’s still extremely expensive.

Engineers are still pecking at different parts of the problem. There are 40 large-scale demonstration projects globally, 13 of which are in the United States, according to the Global CCS Institute.

The U.S. efforts, once expected to make the nation a technology exporter, have been wayward. The Energy Department canceled the high-profile FutureGen project in 2015. A power plant for Mississippi Power Co. has gone billions of dollars over budget. A Duke Energy Corp. project in Indiana soured former CEO Jim Rogers.

"My judgment is, I believe that it’s just too expensive today, there’s been no breakthroughs, there’s been a lot of money invested to figure it out," Rogers said at a recent event at the Columbia University Center on Global Energy Policy. "It’s just not economic to build … the future for coal in the United States, there is no future."

Secretary of Energy Perry said he plans to discuss CCS on his trip to East Asia. But the Trump administration’s strategy is unclear since it proposed cutting the research and development budget at DOE’s Office of Fossil Energy from $668 million to $280 million. — Saqib Rahim