Clean energy grows in Mass., but some hope for more 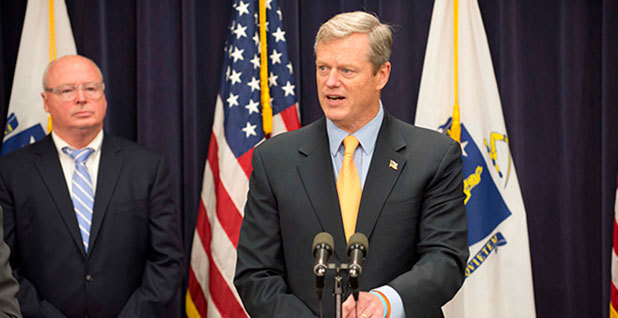 Or it could be that half of the new clean energy will come from yet-to-be-built offshore wind farms. While offshore wind is a promising new source of electricity for New England, it remains a higher-cost form of energy than either utility-scale solar or onshore wind power.

Gov. Charlie Baker (R), who has strongly backed hydropower imports to help Massachusetts meet its obligations under the 2008 Global Warming Solutions Act, has said the bill could be one of the most important policies to emerge from this legislative session, which expires at the end of July.

Among other things, the addition of large amounts of hydro and offshore wind would help offset the loss of coal and nuclear power generation, which has been gradually diminishing in the commonwealth since 2014. The state’s last baseload coal plant, the 1,500 MW Brayton Point Power Station, is scheduled to close by the end of 2017.

And last year, Entergy Corp. said it would close the state’s last commercial nuclear plant, the 680 MW Pilgrim Nuclear Power Station in Plymouth, by no later than June 2019. It pointed to poor market conditions and high operating costs.

The dramatic shift in Massachusetts’ power portfolio has created new opportunities for clean energy and spurred enthusiasm for large-scale renewables, including offshore wind, which could produce several thousand megawatts of power along the Atlantic coast, according to experts.

But critics, including some of the state’s leading environmental groups, still see a plate half-full.

"The House bill would be a step in the right direction for ramping up the state’s use of renewable energy, particularly hydropower and offshore wind. But we need to think bigger," said Ken Kimmell, president of the Union of Concerned Scientists and former commissioner of the Massachusetts Department of Environmental Protection.

UCS and other organizations argue that the state is short-selling its clean energy generation potential. In addition to calling for an even larger offshore wind procurement target by 2027, Kimmell said, "we need to take better advantage of our land-based renewables."

Such resources would include onshore wind — which could be built in western Massachusetts or imported from New York, Pennsylvania or Maine — and solar power. Massachusetts has tapped solar extensively at the residential and commercial scale, with 1,080 MW of installed capacity, but has lagged behind with large-scale utility projects.

Clean energy advocates say the House bill hamstrings Massachusetts’ clean energy prospects by stipulating that only two energy resources — large hydro and offshore wind — could bid on major new generation requests from utilities as stand-alone projects. Other renewables, including onshore wind and solar, would be allowed to bid only if they’re paired with hydropower, according to the legislation.

Advocacy groups, including the Environmental League of Massachusetts and the industry coalition RENEW Northeast, are now urging the Senate to restore onshore wind and solar to the list of generation options in the energy bill set to begin taking shape this month.

"By failing to allow all renewable energy sources to compete, the Massachusetts House of Representatives is leaving out the most cost-effective clean energy resources, plain and simple," said Francis Pullaro, executive director of RENEW Northeast. "Clean air doesn’t have to come at a higher price."

Josh Craft, program director for energy and climate policy at the Boston-based Environmental League, said his organization is not opposed to importing more Canadian hydropower if it allows Massachusetts to wean itself from natural gas generation, which provided roughly 60 percent of the state’s electricity last year.

But boosting Canadian hydropower, which would be carried over new transmission lines from Quebec to New England, should not come at the expense of fully tapping existing resources of Massachusetts and neighboring states. "We’re talking about a very large missed opportunity if we don’t facilitate these renewables getting to market," he said.

While the Senate has yet to draft its energy legislation, Craft said the chamber has traditionally been "more ambitious in their work on climate change, and also more supportive of solar" than the House of Representatives. He believes, however, that the two bills will have significant overlap.

Much of the attention in the near term will focus on state Sen. Ben Downing (D) of Pittsfield, chairman of the Joint Committee on Telecommunications, Utilities and Energy.

The five-term lawmaker, who has been recognized by advocacy groups for his support of clean energy, was not immediately available Friday. Last month, however, Downing told The Boston Globe that he would like to see the legislation broadened to include provisions on other advanced technologies and energy management strategies, such as battery storage and efficiency.

In April, Downing was instrumental in reaching an agreement between House and Senate lawmakers that preserved key elements of Massachusetts’ solar net-metering program, a policy that has stimulated the commonwealth’s solar market over the last decade.

Under the new net-metering law, public and private caps on net-metered power were raised by 3 percent, and proposals to reduce compensation for owners of large solar arrays from retail to wholesale power rates were softened.

"Solar is a key piece of our strategy to combat climate change and reduce our dependence on fossil fuels," Downing said in a statement marking the passage of the net-metering bill.

Meanwhile, offshore wind developers are positioning themselves to capitalize on the new Massachusetts energy law.

Last year, Danish firm DONG Energy secured a federal lease roughly 15 miles south of Martha’s Vineyard to build up to 1 gigawatt of offshore wind capacity that would be sold into the Massachusetts market.

Other firms looking to sell offshore wind power into Massachusetts and the broader New England market are Deepwater Wind, the builder of Rhode Island’s Block Island Wind Project, and Cape Wind Associates, which continues to pursue construction of a large wind farm in Nantucket Sound.