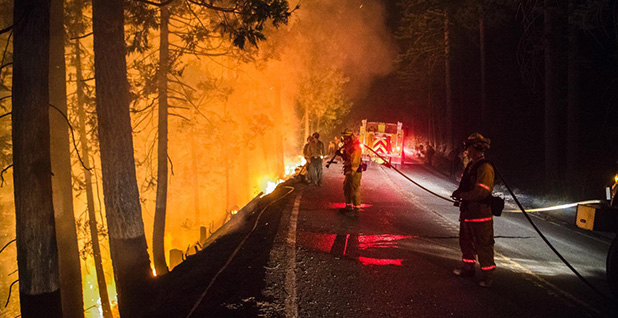 Firefighters at the site of the Ferguson Fire in California. @forestservice/Twitter

Two-thirds of Southern California beaches could disappear and the size of wildfires in the state could nearly double by 2100 because of climate change, a report released today said.

Along with fires and sea-level rise, the reports examined pressures on the power grid, a jump in extreme heat days, threats to human health and other categories.

"In California, facts and science still matter," Gov. Jerry Brown (D) said in a statement. "These findings are profoundly serious and will continue to guide us as we confront the apocalyptic threat of irreversible climate change."

The analysis forecasts high financial costs. Sea-level rise of about 20 inches by 2050 — considered a moderately likely scenario — would trigger nearly $17.9 billion in damage to homes and other buildings, the report said. An extreme flood event on top of sea-level rise would almost double the costs.

Patrick Barnard, a coastal geologist with the U.S. Geological Survey, said researchers looked primarily at Southern California. The outlook is even more dramatic when wrapping in the rest of the coast. Under one worst-case scenario, sea-level rise combined with cliff erosion and extreme storms could put $150 billion in property at risk and affect coastal land where 600,000 people live.

While there’s "scary stuff" in the report, it can help people make choices, said Robert Weisenmiller, chairman of the California Energy Commission.

"It’s an opportunity to really focus on ways to mitigate the impacts of these changes through adaptation measures," Weisenmiller said. "The basic message is … we need to adapt now."

He added, "To the extent we’re talking about really severe heat waves," for example, "we can start identifying who’s going to be the most impacted." Adaptation options include adding local cooling centers or requiring "cool roofs" designed to reflect more sunlight and absorb less heat.

Heat will be a major issue in some areas. The regional report for the Inland Desert region — a swath of land in the southeast corner of the state — projects temperatures could rise 8 to 14 degrees Fahrenheit by the end of the century. That will mean the number of days hotter than 95 degrees could jump to 141 per year in Mojave, and to nearly half the year in Palm Springs.

That will tax the state’s grid as people crank on their air conditioners, the report said, "a critical finding for California’s electric system, because generating capacity must match peak electricity demand."

Extreme heat will be especially hard for low-income people without air conditioning and older people unable to get to a cooler location, said Bruce Riordan, program director of the Climate Readiness Institute at the University of California, Berkeley, and a contributor to the San Francisco Bay Area regional report. State and local officials will need to find ways to help the most vulnerable communities, he said.

"The great income inequality that we have in California is going to be heightened unless we take real steps to deal with it," Riordan said. The effects of warming "will hit people with low incomes harder, and it will be harder for them to recover," he said.

The statewide and local reports also could help people realize how climate change affects people around the world, said Jonathan Parfrey, a reviewer of the statewide climate assessment and a contributor to the Los Angeles regional assessment.

"If you’re just looking at a global report, it seems just so bloodless," Parfrey said. "You don’t grasp what these effects mean to real people." With the assessment and local reports, he said, "you have a context for it, so you get a sense of how this thing that’s called climate change, what it actually means to people on the ground."

The reports looked at different scenarios of greenhouse gas emissions. Under one, the "business as usual" scenario, emissions continue to rise through the end of the century. Greenhouse gas concentrations in that case would hit more than triple the level that existed before human-caused emissions began to build.

Under an alternative scenario, actions are taken to cut emissions. Greenhouse gas pollution still rises through midcentury because of the climate impact built into the atmosphere. After that, emissions would begin to fall.

The worst impacts come under the business-as-usual case. One study found that the average area burned by wildfires would increase 77 percent, and the frequency of extreme wildfires burning more than 39 square miles would jump nearly 50 percent.

That would affect insurance, the analysis said. In the areas with the highest fire risk, the cost of fire insurance could rise 18 percent by 2055. As well, the share of people with property insurance would fall.

"We’ve always had fires in California, but we’re having larger fires, more intense fires," and ones that fire officials say they haven’t seen before, Riordan said. "All of that has a huge impact."

Increased fires will especially affect the Sierra Nevada and the northern parts of the state. Those areas now have cooler temperatures and more precipitation. Future higher temperatures, lower snowfall and more variable precipitation will cause a bigger shift for the mountains than for warmer, drier urban areas, said LeRoy Westerling, a University of California, Merced, professor who worked on the fire analysis.

"Relatively speaking, the forests are more sensitive to that same increase in temperature," Westerling said.

"As you warm up the state and you make precipitation more variable," he added, "you dry the landscape out," extending the fire season and increasing the number of years that could have very active fire seasons.

Prescribed burns and treatments to cut parts of forests could mitigate the impact, the report said. Under one model, treating about 30 percent of vegetated area would reduce the burn area increase in the Sierra Nevada by 16 to 31 percent.

Climate models suggest California’s precipitation might start to come primarily in December through February, with less rain in fall and spring. That could affect fires pushed by Santa Ana and Diablo winds. Those typically come in fall. Without fall rains to mitigate, fires in those periods could be more severe, analysts said.

An increase in fires has an impact on health, Westerling said. The blazes create emissions that drift far beyond the fire area and can aggravate asthma and other conditions.

Deciding to save beaches or homes

The impact on California’s iconic coastline also would be dramatic. Under mid- to high sea-level-rise scenarios, "31 to 67 percent of Southern California beaches may completely erode by 2100 without large-scale human interventions," the statewide report said.

New state guidance for dealing with sea-level rise is asking communities to plan for an extreme scenario: a roughly 9-foot-higher ocean by 2100. Though now seen as a remote possibility, that could happen with rapid melting of the Greenland and Antarctica ice caps, said Barnard with USGS.

The reports present state and local officials with what will become a growing dilemma. If they allow people to erect sea walls, and to armor cliffs, that sets a line for the back of the beach and will contribute to loss of sand, Barnard said.

Cliffs now retreat at a rate of about a foot a year. As seas rise and the water hits those cliffs more often, that will accelerate to about 2 feet annually, Barnard said. As cliffs erode, they deposit sand on the beach. If cities allow people to erect barricades supporting the cliffs — and to keep armor already in place — that means less sand.

"It’s really sort of a fundamental question: Are we going to hold the line and protect what’s right behind the cliffs, or are we going to let the natural system take over and move sediment up and down the coast?" Barnard said. "There’s no easy answer."

In many beach cities, homes are worth multiple millions of dollars, he said, so it’s unlikely cities will restrain homeowners wanting protection. The California Coastal Commission, however, has imposed limits on sea walls.

Adding sand is one solution cities have chosen, but it’s expensive and will become more so because "resources are waning. Where are we going to find all the sand?" Barnard said.