Clinton: ‘I can’t wait to have Al Gore advising me’ in White House 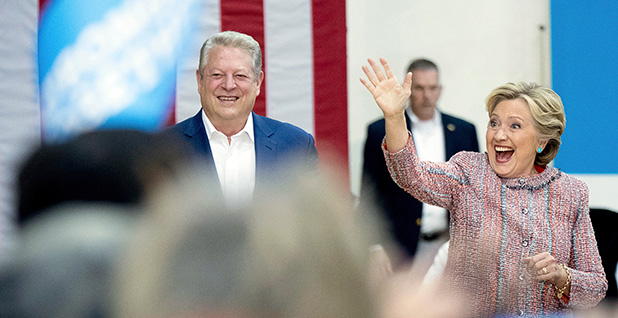 Al Gore sought to buttress Democratic presidential nominee Hillary Clinton’s candidacy yesterday by describing her as an environmental champion who can safely steer the world away from a dangerous climate cliff that threatens to fuel storms and handicap the economy.

The former vice president’s appearance at the side of Clinton in Miami marked an effort by the campaign to energize younger voters to avoid the kind of razor-thin loss that Gore experienced in Florida 16 years ago, an outcome that tipped the election into the hands of President George W. Bush.

"The choice in this election is extremely clear," Gore said. "Hillary Clinton will make solving the climate crisis a top national priority. Very important. Her opponent, based on the ideas that he has presented, would take us toward a climate catastrophe."

Then Gore added, "Your vote really, really counts a lot."

The rally at Miami Dade College provided an unusual focus on climate change exactly four weeks ahead of the election. It also came days after Hurricane Matthew lumbered along Florida’s coastline and into the Carolinas, where it caused major flooding and killed 26 people. Both Clinton and Gore blamed climate change for exacerbating the damage, an assertion that scientists mostly agreed with.

Clinton also denounced Republican nominee Donald Trump’s past comments that cast doubt on man-made global warming, and she said the issue would be a top priority if she’s elected.

"Climate change needs to be a voting issue," Clinton said. "We need to elect people up and down the ballot at every level of government who take it seriously and are willing to roll up their sleeves and get something done. Please, we cannot keep sending climate deniers and defeatists to Congress or statehouses, and certainly not to the White House."

Referring to Trump, she said: "Let’s remember what’s at stake. I’m running against a guy who denies science, denies climate change, says it’s a hoax created by the Chinese."

She also seemed to have future plans for Gore.

"I can’t wait to have Al Gore advising me when I am president of the United States," Clinton said.

The Trump campaign didn’t respond to requests for comment.

Clinton and Gore pointed to rising sea levels as a man-made factor in climate change that contributed to the damage caused by Hurricane Matthew. Gore said the ocean in that region has risen about 3 inches since the early 1990s. They also said the storm was fueled, unnaturally, by warmer-than-normal ocean waters.

"Now, some will say, ‘You know we’ve always had hurricanes; they’ve always been destructive.’ And that’s true," Clinton said. "But Hurricane Matthew was likely more destructive because of climate change. Right now, the ocean is at or near record high temperatures, and that contributed to the torrential rainfall and the flash flooding that we’ve seen in the Carolinas. Sea level has already risen by about a foot, 1 foot, in much of the Southeast, which means Matthew’s storm surge was higher, and the flooding was more severe."

Gerald Meehl, a climate scientist at the National Center for Atmospheric Research, said, "It’s more or less accurate in a general sense."

Human and natural influences on Matthew

Gore put a bigger emphasis on the idea that humans caused the Atlantic to be warmer, and the storm stronger.

"It spun up from a tropical storm into a Category 5 hurricane in just 36 hours. That’s extremely unusual," Gore said. "The reason that happened is the climate crisis is trapping so much extra heat in the Earth’s system, it’s equivalent to what would be released by 400,000 Hiroshima-class atomic bombs going off every day. It’s a big planet, but that’s a lot of heat. And it’s warming the oceans. More than 90 percent of that heat is going into the oceans. And so the southern Caribbean, where it spun up into a Category 5 so quickly, was much warmer than normal because of that. And the Gulf Stream is way warmer than normal for this time of year for the same reason."

Kevin Trenberth, a senior scientist with the climate analysis section at the National Center for Atmospheric Research, agrees that sea-level rise contributed to the flooding and that it’s man-made. But Gore, and even Clinton, are "mixing up" the idea that both natural factors and human influences can play simultaneous roles with hurricanes, he said.

"Yes much of it is correct although it also mixes up climate change and climate variability," Trenberth said in an email. "There is no doubt that Matthew was much worse, esp. the flooding, from human induced climate change. But there was also a natural variability component: together they made it all much worse. The natural component comes from sea surface temperatures being warmer in [the] subtropical N. Atlantic following El Nino. So yes, the ocean temps were at record high levels and sea level has risen (but again part natural and part human climate change)."

Clinton is leading Trump there by 2.4 percentage points, according to recent polling averaged by RealClearPolitics.

Clinton held her rally in a friendly environment. Miami-area voters support her over Trump by 23 percentage points. Trump does better in the Panhandle and in the Tampa area; he leads Clinton by 10 points in both places.

The Clinton campaign made its case to Florida voters by highlighting the risks they face from climbing temperatures, which have increased 2 degrees Fahrenheit on average since 1970, the campaign said. Florida faces a nearly fivefold increase in the number of 95-degree days annually, from seven a year over the last three decades to 32 a year between 2020 and 2039, it said.

"Florida is likely to suffer more heat-related deaths than any other state," the campaign said.

It warned that up to 5,000 additional people could die each year because of extreme heat by midcentury, unless emissions are substantially reduced. The most dangerous sectors are agriculture, manufacturing and construction, the campaign said.

Clinton added: "So you would think if you look at the facts, if you listen to the science, that even the most committed climate skeptic would say, ‘OK, I agree. Something’s happening here. We need to take it seriously.’ But unfortunately, there are still too many people in Washington, on the campaign trail, who won’t face what’s happening right in front of us. Donald Trump is, quote, ‘not a big believer in climate change.’"