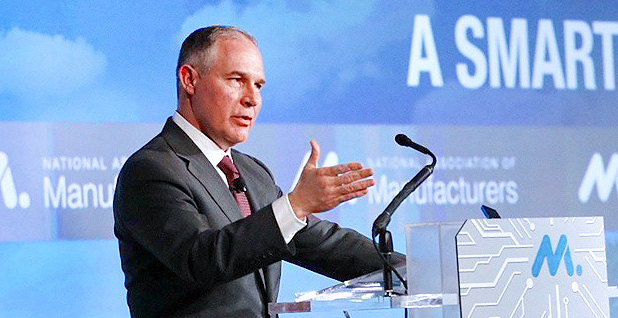 In a CNBC interview today, U.S. EPA Administrator Scott Pruitt said carbon dioxide was not a "primary contributor" to climate change, causing an uproar among environmental groups and Democrats. Photo by David Bohrer/National Association of Manufacturers, courtesy of U.S. EPA.

In an interview on CNBC this morning, Pruitt raised doubts over whether or not carbon dioxide is the main driver behind climate change. Asked if CO2 is the "primary control knob for climate," Pruitt said he wouldn’t agree with that assessment.

"I think that measuring with precision human activity on the climate is something very challenging to do, and there’s tremendous disagreement about the degree of impact, so no, I would not agree that it’s a primary contributor to the global warming that we see," Pruitt said.

Those comments by the EPA chief don’t jibe with the scientific consensus that carbon dioxide is the principal cause of climate change. Several environmental groups pounced on the remarks from Pruitt, saying he was disavowing the science behind climate change.

"The mask is off. After obscuring his true views during his Senate confirmation hearings, Scott Pruitt has outed himself as a pure climate denier," said David Doniger, director of the Natural Resources Defense Council’s Climate and Clean Air program.

On Capitol Hill, Sen. Brian Schatz (D-Hawaii) said, "If there was ever any doubt that Scott Pruitt is a climate denier, this settles it."

The Democratic National Committee sent out a statement saying the EPA administrator should familiarize himself with his agency’s own website, which says "carbon dioxide is the primary greenhouse gas that is contributing to recent climate change."

Pruitt’s remarks in today’s interview seem to go further than what he said during his Senate confirmation hearing in January. Pruitt acknowledged climate change then, saying, "Let me say to you science tells us that the climate is changing, and that human activity in some manner impacts that change.

"The ability to measure with precision the degree and extent of that impact, and what to do about it, are subject to continuing debate and dialogue, and well it should be," Pruitt said.

Asked to respond to the pushback on Pruitt’s remarks in the CNBC interview, an EPA spokeswoman said, "Administrator Pruitt has said repeatedly and consistently that he believes the climate is warming and that it is in part due to human activity.

"Many questions remain however that should be debated: How much is the climate changing, to what extent is human activity involved, and what to do about it?" said the agency spokeswoman.

Pruitt said in his interview that Congress had not spoken on whether or not EPA had the authority to regulate carbon dioxide, making note of the 2007 Supreme Court ruling in Massachusetts vs. EPA.

"Nowhere in the equation has Congress spoken. The legislative branch has not addressed this issue at all. It’s a very fundamental question to say are the tools in the toolbox available to the EPA to address this of CO2," Pruitt said. "The decision in 2007 was not that EPA had to regulate. The decision in 2007 was they had to make a decision."

The 2007 high court ruling led to EPA’s 2009 endangerment finding against carbon dioxide, which serves as the basis for EPA’s climate change rules that Pruitt challenged in court as Oklahoma’s Republican attorney general. During his Senate confirmation hearing in January, Pruitt seemed supportive of that finding, saying "the endangerment finding is there and needs to be enforced and respected."

At EPA, Pruitt has begun to roll back the agency’s regulations, including the Waters of the U.S. rule. On CNBC today, he said that he anticipated that EPA soon would begin to pull back on the Clean Power Plan, as well as tougher fuel economy standards for automakers, suggesting that the process behind those fuel efficiency rules was rushed by the Obama administration.

During his interview, Pruitt also weighed in on the Paris climate change agreement. The EPA administrator noted that it was "largely a decision" by the State Department, but he called the Paris agreement "a bad deal" that should have secured confirmation from the Senate.

President Trump said he would withdraw the United States from Paris on the campaign trail last year, but his administration has yet to move forward on that pledge.