Congress insists on returning to work, but how? 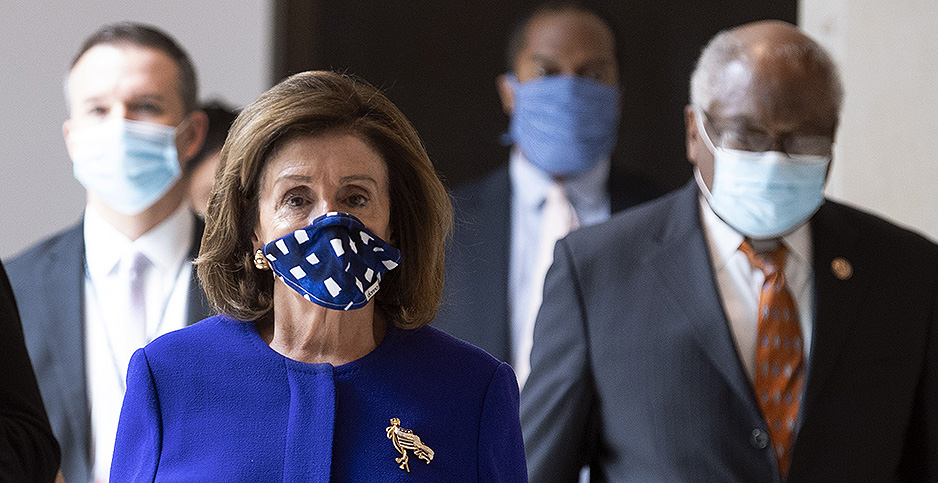 The Senate is back on Capitol Hill today and the House may return next week, but leaders are still figuring out the logistics of working during the pandemic.

"If it’s essential for doctors, nurses, health care workers, truck drivers and grocery store workers and many other brave Americans to keep carefully manning their own duty stations during the pandemic, then it is essential for senators to carefully man ours and support them," Senate Majority Leader Mitch McConnell (R-Ky.) said on Fox News.

The Democratic leadership has been hesitant to criticize McConnell for calling lawmakers back to Capitol Hill. Still, there is grumbling, especially considering that Washington remains under a stay-at-home order.

"I think it’s unfortunate that Sen. McConnell is making the Capitol police and groundskeepers and people who work in the food service come back in violation of that local order," Sen. Tim Kaine (D-Va.) told MSNBC last week. "It’s endangering the health of many, many people."

The Office of Attending Physician for the Capitol put out a multipage memo to address safety concerns for lawmakers and their aides. Recommendations include minimizing the number of staff, not crowding workspaces, screening visitors and wearing face coverings.

McConnell is confident the Senate can conduct business in a safe manner.

"We can modify our routines in ways that are smart and safe, but we can honor our constitutional duty to the American people and conduct our business in person," he said.

Democratic Sens. Debbie Stabenow of Michigan and Cory Booker of New Jersey said on a call with reporters last week they plan to keep their staff at home and their offices formally closed.

"I will be coming in and asking my staff to abide by the dictates of Washington, D.C.’s mayor and the governors of Virginia and Maryland, and so most of my staff — pretty much all of my staff — will be remaining working remotely," Booker said.

Senate Minority Leader Chuck Schumer (D-N.Y.) said he’s leaving it to individual senators in his caucus to decide whether or not to come back to town.

"We Democrats are going to practice good social distancing and handle the situation the best we can," Schumer told reporters last week. "We will continue to have our weekly calls by phone."

One area Democrats have questioned McConnell on, however, is his plan to conduct business not related to the novel coronavirus pandemic, including judicial nominations (Greenwire, April 29).

"Having hearings on a judge who is unqualified, or hearings on candidates unrelated to COVID makes no sense at all," Schumer said. "We need these oversight hearings."

McConnell defended the move, however.

"We have many confirmations, for example," he said. "The Senate is a personnel business, the House is not — that have been bottled up by the Democrats even before the pandemic, so we have much work to do with the American people, and we think we can do it safely."

The House may change its rules as soon as next week to allow remote voting and committee work — something McConnell has declined to endorse.

Members of the Senate Homeland Security and Governmental Affairs Permanent Subcommittee on Investigations met via videoconference Thursday to discuss proposals.

Subcommittee Chairman Rob Portman (R-Ohio) said remote voting should "never be the norm" but should be in place for times when senators cannot safely "be in the same place."

"This is something that I think should be not looked at strictly in terms of the pandemic but the general concern that there are times when Congress either cannot physically or should not be gathering," Portman said.

Portman and Sen. Dick Durbin (D-Ill.) introduced a resolution in March to allow for temporary remote voting within the Senate rules.

Martin Gold, a partner at Capitol Counsel and a former Senate Rules Committee staffer, told the panel that Congress needs to establish "guardrails" to determine when remote voting is utilized.

"I don’t think there is anybody who really thinks that remote participation is a substitute for the actual Senate," Gold said.

Sen. Mitt Romney (R-Utah) voiced support for remote voting during the hearing but raised concerns about the technology "becoming a political tool" during an emergency.

"I think being able to define what is a true emergency and what would require remote voting would be something that we need to pay attention to," Romney said.

Portman noted the video conference was the "first time we’ve been able to do this in the U.S. Congress, certainly in the Senate."

Majority Leader Steny Hoyer (D-Md.) sent a letter to the attending physician Friday asking for advice on how the chamber could return.

Speaker Nancy Pelosi (D-Calif.) last week declined to weigh in on the Senate’s decision to come back but noted the House has more than four times as many members.

Still, there is some committee work happening. The House Appropriations Committee is meeting to discuss pandemic issues, for example.

House Democrats and Republicans have pledged to work together on remote work procedures, but it doesn’t seem as if all GOP members are on board.

House Minority Leader Kevin McCarthy (R-Calif.) echoed other Republicans who said the House should view its work as "essential" and reconvene sooner rather than later.

"I think the American public would like to see us do our job," McCarthy told reporters last week.

The House GOP leader said he has not been pushing to bring everyone back all at once but prefers committees return first for key markups.

McCarthy suggested committees could vote on legislation during the beginning of the week and then the entire House could return a few days later to vote on it.

"As these bills get done, you can pinpoint when they need to be voted on, and you can bring members back. So maybe all members are not back there for an entire week. They’re there for a few days to vote," he said.

He also voiced concerns about one member being able to cast votes for large groups of lawmakers.

McCarthy this morning published his ideas for reopening Congress in a post on the platform Medium.

Pelosi did not detail the remote work plans, but the Democratic majority appears poised to move forward on its own if necessary.

"Everybody wants to open up the Congress, but we want to do it in a way that if people have to stay home, because of this [pandemic], whether it’s about themselves, a family member or the transportation, which is more difficult now, that remote voting will enable them to do that," Pelosi said. "We just have to get enough people here to do the remote voting."