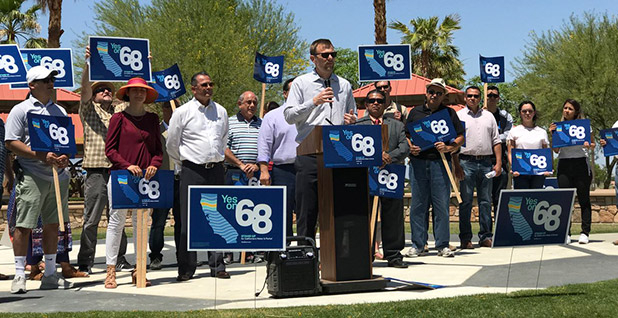 After winning one of the country’s largest conservation ballot measures in California last week, advocates believe they have found a campaign issue with bipartisan political appeal in the Trump era.

With nearly 57 percent of the vote, California voters approved a record $4.1 billion bond package that will provide funding to a host of environmental priorities, including climate change resilience and stream restoration.

But the measure’s focus — and its biggest pot of money — is aimed at improving to access to parks, especially in underserved communities. According to the measure’s sponsor, the Trust for Public Land, 1 in 3 Americans don’t have a park within a 10-minute walk from home.

The nonprofit says the measure’s success is part of California’s resistance to the Trump administration’s budget cuts and the rollback of environmental regulations.

"This is absolutely a part of what California is doing to combat what’s happening federally," said Mary Creasman, the group’s director of government affairs in California. "This is going to be the beginning of a trend."

Creasman said the effort for a ballot initiative had been percolating for a while but was finally successful in the state Legislature last year, with Gov. Jerry Brown (D) signing the legislation.

She said the Trump administration was a major factor. "We didn’t get the political momentum needed to pass this until last year, and there’s a reason for that," Creasman said.

But the shift toward funding conservation through state and local ballot measures has been happening for several years, said Will Abberger, the Trust for Public Land’s conservation finance director.

The group has been working in the state and local finance realm since 1996. In total, it has worked on more than 500 successful measures, creating some $68 billion in funding.

Not all of the initiatives have been statewide; many are local or county sales taxes, property taxes, or bond measures. This year, for example, the lands trust has put 10 measures on the ballot.

They range from Proposition 68 in California to a $19.4 million property tax in Gallatin County, Mont., to a $2.5 million municipal bond in Corrales, N.M.

The group has been successful in nine out of the 10 initiatives this year already and has a 81 percent success rate over its history, Abberger said. And it expects to have as many as 50 measures on ballots across the country by the end of the year.

The group has not shied away from wading into conservative states, believing the issues in question cut across party lines, said Abberger.

This year, for example, it has a measure on the Georgia ballot that would dedicate a portion of the state sales tax on sporting goods to conservation. It’s a constitutional amendment, and it would raise $200 million over 10 years.

"If you want to think about red versus blue, Left Coast versus Deep South, there is a real contrast there," Abberger said. "But based on the polling that we’ve done on the ‘Georgia Outdoor Stewardship Act,’ it’s something that Georgia voters are very supportive of."

The group’s pollster said that one of the strongest demographics voting for the ballot measures looks a lot different from the typical environmental voter.

"One of the strongest constituencies in support of conservation measures are sportsmen — hunters and anglers," said David Metz, president of the FM3 Research polling firm. "If you look at the profile, they tend to be disproportionately white, male, over 50, rural."

That demographic, he said, is typically not supportive of higher taxes or increased government spending. "But they vote for conservation funding proposals that they think will offer benefits for wildlife conservation," he said.

In California, the recent measure will likely be a boon for some long-delayed projects that have long struggled to find funding.

It includes $200 million for projects at the Salton Sea, the state’s rapidly shrinking lake near the Mexican border. As the lake recedes, dust from its lake bed is creating a public health crisis (Greenwire, June 13, 2016). There is an additional $300 million in the measure for river and stream restoration.

Advocates will likely also seek some of that funding to remove outdated California dams, said Redgie Collins of the nonprofit California Trout Inc. They include the Matilija Dam in Ventura and the Rindge Dam in Malibu, both of which are nearly filled with sediment, serve no purpose and harm local threatened species (Greenwire, Aug. 23, 2017).

Collins said legislators and voters "are taking heed" of the policies and rollbacks coming out of Washington, D.C. The ballot measure, he said, is part of "building a green wall in California."

Creasman of the Trust for Public Land echoed that sentiment, pointing to the climate resilience funding in the measure.

"California has been ravaged by wildfires, by flooding, by extreme heat," she said. "We are in a moment when voters and leaders feel the reality of climate change in a way they’ve never felt before."