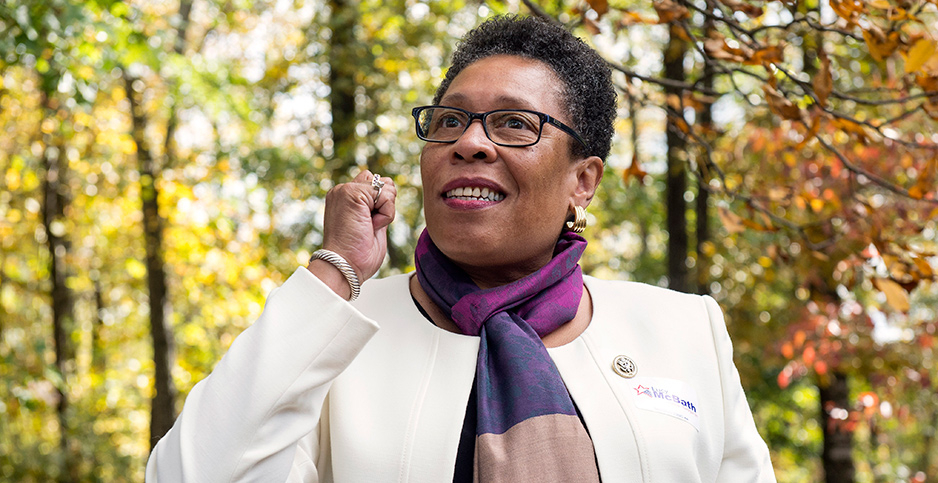 Rep. Marcia Fudge (D-Ohio), pictured in 2018, could be in the race to be President-elect Joe Biden's Agriculture secretary. Brian Cahn/ZUMA Press/Newscom

At a hearing nearly two years earlier, in May 2017, the Ohio Democrat had let Perdue go on at length describing his goals for reorganizing the Department of Agriculture. Running it like a corporate CEO would bring better results to rural America, he’d said.

Fudge wasn’t having any of that by February’s hearing on the state of the rural economy, cutting off Perdue as he struggled to explain what Fudge was now calling a "half-baked" approach to running one of the federal government’s biggest agencies.

Soon, Fudge may find herself in Perdue’s shoes.

She’s reportedly a top candidate for Agriculture secretary under the incoming president, Joe Biden. Fudge, 68, has critical support within the Congressional Black Caucus, of which she’s a member and former chairwoman. Supporters say she’d put new emphasis on the department’s role in urban and minority communities, recognizing USDA’s role beyond farm country and revisiting Perdue’s reshuffling.

If it happens, Fudge’s nomination could fulfill hopes that were lost when the last Black Agriculture secretary, Mike Espy, was forced out in 1994 over allegations he’d accepted improper gifts — charges of which he was later acquitted.

"That whole department was hell-bent on not allowing anyone of color to be a success," Majority Whip Jim Clyburn (D-S.C.) told E&E News on Monday. Fudge’s toughness would help her in the position, he said. "They will never be able to undercut Marcia Fudge."

Clyburn said he first met Fudge when she was chief of staff to Rep. Stephanie Tubbs Jones (D-Ohio), who died in office in 2008. Fudge won a special election to replace her, representing a district including 32 municipalities around Cleveland.

By then, she’d been mayor of Warrensville Heights, Ohio, for eight years. Before that, she worked in the Cuyahoga County Prosecutor’s Office. She’s a past president of the Delta Sigma Theta sorority, one of the "Divine Nine" group of historically Black Greek letter fraternities and sororities.

Fudge declined an interview request through a spokeswoman, who added, "If offered, she’d be honored to serve."

Unlike Perdue, Fudge has a long record of public comments, votes and legislative proposals on federal agriculture issues, including pushing for low-income nutrition programs and farmland conservation measures that protect public water supplies. The nutrition program, called the Supplemental Nutrition Assistance Program, is the biggest part of the farm bill that’s renewed every five years; she’s fought Trump administration proposals that could cut the number of recipients or impose new work requirements for people receiving benefits.

One of her biggest distinctions from Perdue, a former Georgia governor and state legislator, can be found in her personal financial disclosures. The reports, filed with the House Office of the Clerk, show that she has a pension with the state of Ohio that brings her less than $100,000 in income, a residential property that generates between $50,001 and $100,000 in income, and not much more.

Perdue’s disclosure went on for multiple pages outlining his business interests, and his confirmation in the Senate was delayed in part because of the need to complete the paperwork and have congressional staff review it.

And while Fudge, like other senior members of the House Agriculture Committee, takes campaign money from agribusiness, her major source of campaign money is organized labor, according to Federal Election Commission filings.

The other widely reported candidate for USDA chief is former Sen. Heidi Heitkamp (D-N.D.), who has a reputation as more of a political moderate. Heitkamp could be the favorite of major commodity groups and would probably breeze to confirmation in the Senate, where she served on the Agriculture Committee, one agriculture lobbyist said.

But a Heitkamp nomination could irritate the Democrats’ liberal wing, which is itching for a shift to the political left after four years of Donald Trump in the White House. Clyburn said he’s spoken to the Biden transition team as well as to civil rights groups like the NAACP to promote Fudge for the job.

"They know what this department means to the African American community," Clyburn said.

A coalition of more than 50 left-leaning farm, environmental, food safety and animal welfare groups wrote to the Biden transition team last week to promote Fudge’s candidacy. They praised her advocacy for slaughterhouse workers, including opposing USDA efforts to speed inspections at meat processing plants, and called her "an ally of family-scale farms and regional food systems."

"We need someone with vision for a just food system," said Joe Maxwell, a farmer in Rush Hill, Mo., who’s president of Family Farm Action, one of the groups involved.

Maxwell said he hopes the next Agriculture secretary can move the department away from a focus on major commodities dominated by big agribusinesses.

Other groups say they want USDA to pay more attention to organic agriculture. Fudge might be the candidate to do so, given her résumé: She once chaired the Agriculture Subcommittee on Conservation and Forestry focusing on water quality, which is improved by better soil practices that reduce runoff.

"We’ve found her to be very accessible on agriculture issues," said Amalie Lipstreu, policy director for the Ohio Ecological Food and Farm Association in Columbus.

At the Agriculture Committee hearing last year, Fudge took Perdue to task for, in her view, making rural development a lower priority and relocating two research agencies away from Washington, diminishing their profile.

"Under your leadership, USDA has implemented a series of what I really believe are kind of half-baked proposals to reorganize the department and introduce harmful regulations that we have had to come behind you and correct," she said, according to a transcript.

Not all of Fudge’s jousts are serious. In 2014, she took on comedian Stephen Colbert in a fencing contest in a Capitol Hill hallway for a segment of "The Colbert Report" (He beat her, 2 to 1).

To Clyburn, one of Fudge’s closest allies in Washington, she’d offer a way to repair historical wounds, drawing on her advocacy for workers, lower-income families and minority populations.

"You only have to look at the history of agriculture," said Clyburn, who worked with farmworkers decades ago in South Carolina and came away with a lesson that USDA didn’t want to deal with people of color.

"We need somebody at the department that’s a strong person who’s had these kinds of experiences," Clyburn said.