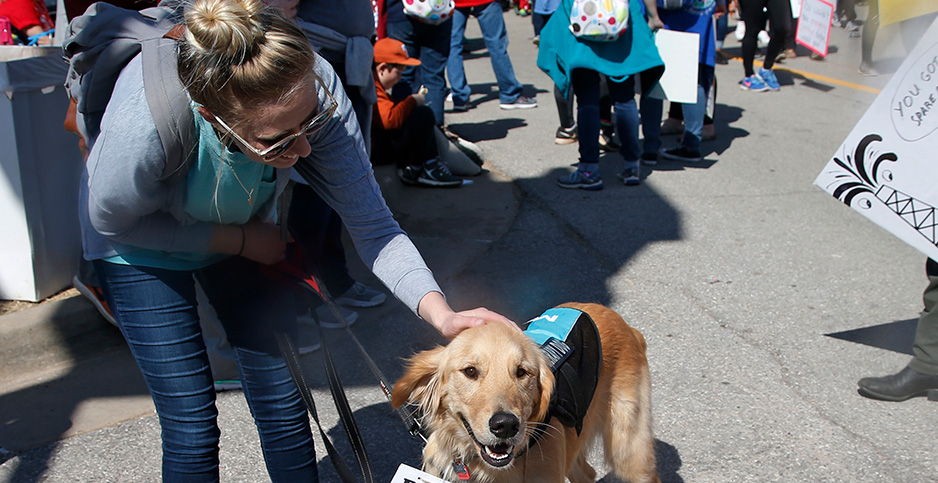 Lawmakers in Oklahoma recently approved the state’s first tax increase since 1990, under pressure from teachers who staged a statewide walkout to protest low pay and working conditions.

The fallout from that vote could be equally historic.

At least one special-purpose group is recruiting primary challengers to take on Republican lawmakers who voted in favor of the tax increase. Democrats, meanwhile, are recruiting new voters among the thousands of teachers who have flocked to the Capitol during the walkout and are hoping to field a bigger crop of candidates than they have the last few years.

Democrats have struggled to find their footing, especially in rural, conservative parts of Oklahoma. Even the majority of the state’s teachers are Republicans, said Bill Shapard, a researcher in Oklahoma City who runs the SoonerPoll. At the same time, Republicans have fallen flat in three attempts to fix the school funding crisis, leaving themselves vulnerable to charges that they’re unable to govern, Shapard said.

"The question is, will that level of enthusiasm swing, and will now Democrats begin doing better because Republicans are now depressed and Democrats are energized?" he said.

There could be more turmoil if EPA Administrator Scott Pruitt, who was the state attorney general until early 2017, decides to run for governor (Climatewire, April 5).

Republicans have controlled both chambers of the Legislature and the governor’s office since 2010, and used their control to pass a series of tax cuts. In 2014, the Legislature broadened and extended a break in the gross production tax (GPT) on oil and gas production, just before energy prices crashed.

Teachers had already gone years without a pay raise at that point, and the fiscal crisis forced deep spending cuts throughout the state government. Hundreds of employees were laid off, and about one-fifth of Oklahoma’s school districts are holding classes four days a week to save money.

The Legislature failed to fix the budget shortfall during its regular session last year and during two special sessions that continued into this year. Teachers unions, led by the Oklahoma Education Association, proposed a $905.7 million tax increase that would provide raises for teachers and support staff, along with other state employees, and more funding for books and educational needs (Energywire, March 26).

Legislators approved some of the new taxes on March 26 and March 28, including an increase in the GPT from 2 percent to 5 percent. They’re still struggling to find other revenue to fund the full package of raises that teachers have asked for (Energywire, March 29).

The teachers walked off the job on April 2.

All 101 House members are up for re-election this year along with half of the 48-member state Senate, and incumbent Gov. Mary Fallin (R) can’t run again because of term limits.

If Pruitt enters the race, he’ll face a crowded field. Lt. Gov. Todd Lamb and Oklahoma City Mayor Mick Cornett are the leaders in a six-way race for the Republican nomination, according to the SoonerPoll. Two Democrats are running for the seat, including former state Attorney General Drew Edmondson. The nonpartisan Cook Political Report rates the seat solidly Republican.

Filing for the June 26 primary opens today and runs until Friday, although some office-seekers have already announced their campaigns. The short election cycle tends to favor incumbents, since challengers will have less than three months to raise money and create an organization.

The teacher walkout, organized by the Oklahoma Education Association and other unions, could change the dynamic, said Anna Langthorn, chairwoman of the state Democratic Party. So many educators have descended on the Capitol that state troopers have had to stop allowing people in the building on some days.

"They didn’t necessarily know what GPT was before last week, and now they do, and they know it’s important," Langthorn said. "And they are holding their legislators accountable, and that’s the first time that’s happened in a very long time."

The newly formed group Oklahoma Taxpayers Unite, led by former U.S. Sen. Tom Coburn (R-Okla.), sees the tax vote as a broken promise. The group is considering a petition drive to repeal the new taxes and is recruiting candidates to challenge lawmakers who voted for the tax package.

Eleven House members and seven state senators voted for the bills despite a previous pledge to oppose any new taxes.

The group doesn’t oppose raises for teachers but wants legislators to pay for it by merging agencies and eliminating wasteful spending, Brooke McGowan, a spokeswoman, said in an interview.

"I think we are going to be able to find willing volunteers," she said.

Yet the legislators knew about Coburn’s group, and the possibility of a primary challenge, before they voted, said Mickey Thompson, a former head of the Oklahoma Independent Petroleum Association who supports higher oil taxes.

"They just drove right past Tom Coburn’s press conference," he said. "Even a cynical old dude like me is thinking this might be new territory."