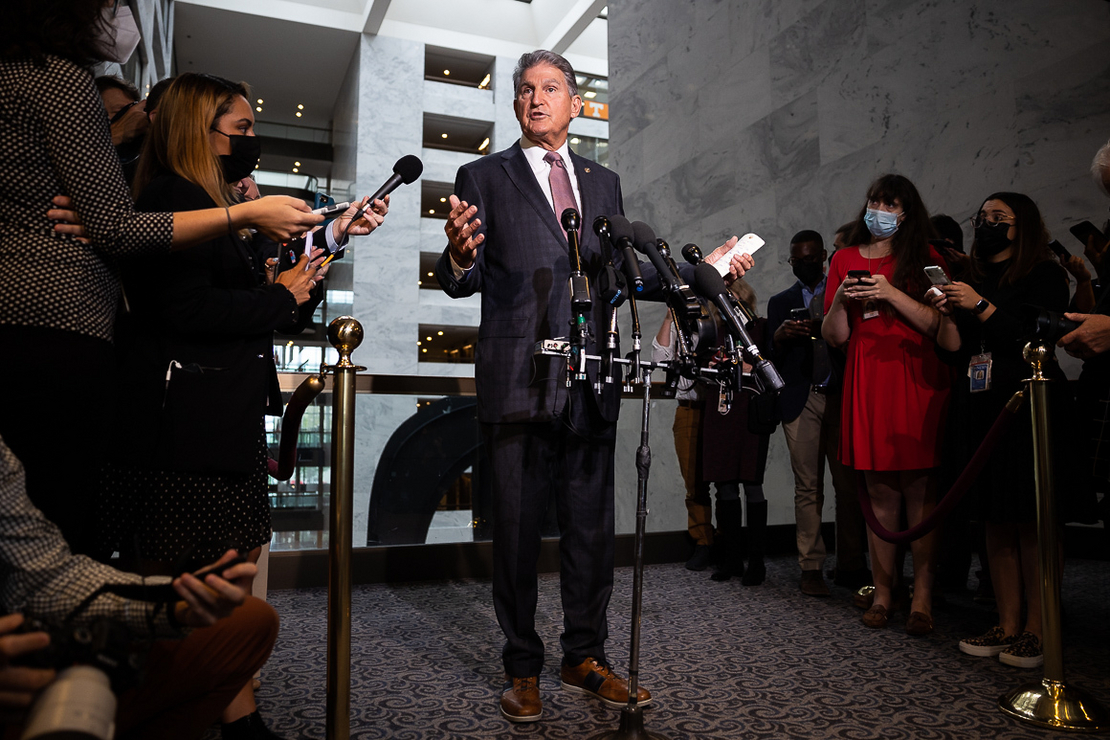 The Democrats’ central climate plan in the $3.5 trillion budget reconciliation package is hanging by a thread as lawmakers return from a weeklong recess that failed to cool tense deliberations on major aspects of President Biden’s agenda.

A source familiar with negotiations described the CEPP on Friday night as being on "life support," confirming to E&E News that "Manchin said it’s off the table," with the White House now "working on alternatives" to reduce emissions.

White House and congressional aides are now scrambling to develop policies or make changes to the CEPP to get Manchin aboard. Adding to the tension is the administration’s attempts to secure global greenhouse gas reductions at the upcoming COP26 conference.

For now, the CEPP isn’t all the way dead — yet.

Manchin has for weeks publicly spelled out his opposition. He’s raised concerns about paying utilities to deploy clean energy when many are already doing so. He’s also worried about electric reliability as the grid continues to depend more on renewables.

“This shouldn’t be viewed as unexpected,” said Paul Bledsoe, a strategic adviser with the Progressive Policy Institute. “We knew that the CEPP was going to be a hard sell in the Senate for a variety of reasons.”

Another source familiar with negotiations said the CEPP is not totally off the table yet and that negotiators are continuing to seek a version of the policy that Manchin could accept. That could mean a variety of changes to the plan drawn up last month by the House Energy and Commerce Committee.

Negotiators could, for instance, tweak the annual clean energy deployment targets, currently at 4 percent, or raise the emissions intensity benchmark to allow for more fossil fuels with carbon capture.

Another possibility is that negotiators try to find a way to get more emissions reductions without the CEPP, from clean energy tax policies or a carbon pricing proposal supported by Senate Finance Chair Ron Wyden (D-Ore.) and other members of his committee.

Wyden said this weekend that his “Clean Energy for America Act,” S. 1298, which would consolidate dozens of energy credits into three technology-neutral categories aimed at emissions reductions, should be seen as the “linchpin of our climate package.”

“While I strongly support the Clean Energy Payment Program, it’s important to note that the overwhelming majority of emissions reductions come from the energy tax overhaul in our Clean Energy for America Act,” Wyden said in a statement.

But without the kind of specific investments in the power sector that the CEPP would provide, the package is likely to fall short of what would be needed to meet President Biden’s climate goals, said Leah Stokes, an associate professor at the University of California, Santa Barbara, who helped develop the CEPP.

“I know that many folks in the Senate have been very focused on a carbon price, and they want meaningful pollution reduction, and that’s valid,” Stokes said in an interview. “I think that there have to be targeted policies in the power sector that invest in the clean energy transition.”

Climate-focused Democrats — and their allies in the environmental community — have insisted that the reconciliation package must make meaningful changes to match the scale needed to address climate change, either with a CEPP or without one. That may give the White House additional wiggle room in finding other avenues to address emissions.

“Let’s be clear: the Build Back Better budget must meaningfully address climate change,” Sen. Tina Smith (D-Minn.), one of the CEPP’s biggest backers, said in a tweet this weekend. “I’m open to different approaches, but I cannot support a bill that won’t get us where we need to be on emissions.”

While the CEPP’s stagnation has some backers worried, its slowdown could reopen consideration for a carbon tax. Lawmakers like Sens. Sheldon Whitehouse (D-R.I.) and Chris Coons (D-Del.) have pushed the idea of a carbon tax framed in a way that would not violate Biden’s commitment not to raise taxes on those making less than $400,000. Such a proposal would likely exempt gasoline from the tax.

Environmental groups said this weekend that their main goal is drastic emission reductions, regardless of what policy advances to achieve those aims.

“If the CEPP were to be abandoned, President Biden and Congressional Democrats must deliver bold NEW investments in other climate priorities to close the emissions gap and meet the President’s international climate goals in the coming days and weeks as the U.N climate negotiations near,” the Sierra Club said in a statement.

Negotiations over the package are expected to last through the end of the month, but House Democrat leadership indicated a vote on reconciliation is expected before Biden leaves for Scotland to meet with global leaders at COP26.

“With the short-term extension of surface-transportation programs through October 31, the House will aim to consider the Bipartisan Infrastructure Investment and Jobs Act and the Build Back Better Act this work period.,” Majority Leader Steny Hoyer (D-Md.) said in a "Dear Colleague" letter.

The Democrats’ reconciliation feud spilled further out in the media this week as Budget Chair Bernie Sanders (I-Vt.) attempted to apply public pressure on Manchin through an op-ed published in West Virginia.

Sanders has been a key progressive voice behind the $3.5 trillion reconciliation proposal as well as a strong supporter of holding up the bipartisan infrastructure package to ensure passage of the bigger bill.

“This is a pivotal moment in modern American history,” Sanders wrote in his op-ed in the Charleston Gazette-Mail. “We now have a historic opportunity to support the working families of West Virginia, Vermont and the entire country and create policy which works for all, not just the few.”

The home state op-ed followed similar attempts by Vice President Kamala Harris to apply pressure on Manchin earlier this year by appearing on a West Virginia TV station for an interview. Manchin did not appreciate the gesture — then and now.

In a statement issued over the weekend, the West Virginia Democrat dismissed Sanders as a “self-declared Independent socialist” and stated he would not vote for “a reckless expansion of government programs.”

“This isn’t the first time an out-of-stater has tried to tell West Virginians what is best for them despite having no relationship to our state,” Manchin said.