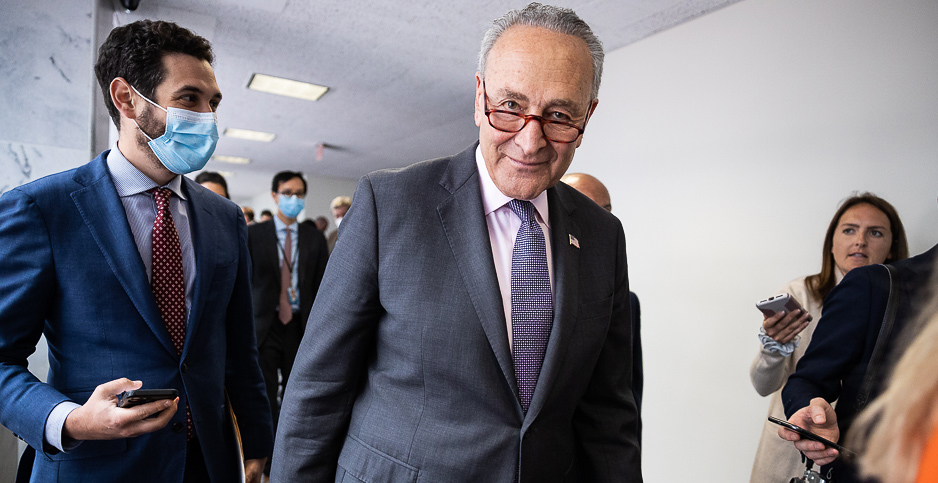 A growing number of Democrats are getting impatient with bipartisan infrastructure talks, amid back-and-forth offers between the White House and Senate Republicans.

As calls grow on the party’s left flank for quick action, Democrats increasingly see an obstinate GOP that will never go along, particularly on issues like climate change where the parties remain far apart.

"I think the president wants to give it the good college try. He is entitled to do that," Sen. Sheldon Whitehouse (D-R.I.) said in an interview yesterday.

"If it doesn’t work, then we have to go back to the type of work that brought us to the very successful American Rescue Plan, which people love, and get away from the faux bipartisanship of Washington inside players," Whitehouse added.

Whitehouse and several other prominent Democrats said they would like to see Congress pass a major infrastructure bill by the August recess — whether it involves Republicans or not.

Lawmakers already have a full plate, with police reform and family and child care policy also on the agenda. But after the monthlong break in August, they’ll have to deal with government spending negotiations and, just a few months after, the midterm season.

For Democrats, the COVID-19 economic downturn and the popularity of the $1.9 trillion American Rescue Plan also offer a limited political opportunity to pump trillions into climate change policy and infrastructure.

"We have a lot to do and potentially a very short window to do it, and if we’re rewarding Republican obstruction with Democratic delay, then they’re just going to get more obstructionist," Whitehouse said. "Their goal is to try to have us do as few things as possible."

Multiple Democratic senators said the talks between Biden and the GOP represent a way to show moderate Democrats that the party is making a good-faith effort to work with Republicans.

Party leaders, for now, appear to be operating on a similar timeline, even if they’re not ready to drop the bipartisan entreaties. Should talks fall through, they’ll have additional opportunities to pass a partisan bill through budget reconciliation, which allows certain legislation to bypass the Senate filibuster.

They could attempt a second round with the fiscal 2021 budget resolution they used to pass the American Rescue Plan, or they could wait until the beginning of fiscal 2022 in October.

But Senate Majority Leader Chuck Schumer (D-N.Y.) gave no indication that he was ready to bring bipartisan discussions to a close, and deflected reporters’ questions about when it would be time for Democrats to walk away from negotiations.

"It has always been our plan, regardless of vehicle, to work on an infrastructure bill in July," Schumer told reporters yesterday when asked when he would be prepared to move ahead with reconciliation. "That’s our plan: to move forward in July."

Meanwhile, talks are moving ahead, including an expected $1 trillion counteroffer from the Senate GOP this week after Biden moved his infrastructure target from $2.2 trillion to $1.7 trillion (E&E Daily, May 24).

House Speaker Nancy Pelosi (D-Calif.) has also said she plans to put an infrastructure bill on the floor before the July 4 recess, and committees of jurisdiction on both sides of Capitol Hill are moving pieces forward.

Today, the Senate Environment and Public Works Committee will mark up a bipartisan surface transportation bill, while the Senate Finance Committee is set to vote on a broad clean energy tax measure from Chairman Ron Wyden (D-Ore.), which is seen by environmentalists as a potential facet of an infrastructure bill.

The question before the Democratic caucus right now is when to move on from bipartisanship, said Sen. Mazie Hirono (D-Hawaii).

"Some of us are already at the point where we’re saying this isn’t going to happen in a bipartisan way," Hirono said.

"I’m not looking at any particular deadline," she added. "It happens when it happens."

Others, however, are looking to move with more urgency, given several upcoming recess weeks — and lessons learned from failed bipartisanship on issues like climate change during the Obama administration.

Sen. Martin Heinrich (D-N.M.) said he "suspected" the message was getting through to his party leadership that it’s time to go it alone on infrastructure.

"They’re not serious," he said of Republicans. "If they were serious, I would say we need to be flexible, continue to work, but I don’t see any indication that the president’s overtures are being met in a legitimate way."

Sen. Chris Van Hollen (D-Md.) suggested he, too, was growing impatient, saying Democrats should consider setting a deadline of "the end of the week" to move on ahead.

"Look, I think [Senate Majority Leader] Mitch McConnell [R-Ky.] gave up his strategy when he said that he was 100% — not 99%, but 100% — committed to blocking the Biden agenda, so my view is that it’s been important to solicit Republican support, but this is the moment to say you either move forward with us or get left behind," Van Hollen said.

Senate Democrats are navigating the tensions between wanting to look flexible and open to compromise without giving off an appearance of weakness or having succumbed to a state of paralysis while negotiations continue.

The EPW and Finance markups today will be key to reinforcing that message, and they could offer clarity on how, exactly, the process will come together.

EPW Chairman Tom Carper (D-Del.) said yesterday that the $304 billion transportation authorization measure he inked with ranking member Shelley Moore Capito (R-W.Va.) could be a model for other committees of jurisdiction as Congress moves forward with the larger debate.

"I hope that there we’ll pass a number of major bills which, taken together, will represent great progress on a variety of fronts to do good things for our planet," Carper said.

But climate remains a question mark and a point of intraparty debate, with green groups pushing hard for a wide variety of measures to reduce greenhouse gas emissions.

The Sierra Club this week circulated a memo outlining its top priorities for infrastructure, with emphasis on a clean electricity standard and Wyden’s clean energy tax bill.

Asked about those two policy priorities yesterday, Whitehouse — a longtime carbon tax supporter — appeared skeptical. The important thing, he said, is to hit the targets laid out by the Intergovernmental Panel on Climate Change to limit warming to 1.5 degrees Celsius.

"It needs to point us at 1.5 degrees, and it needs to do so at a reasonable cost per avoided ton of emissions," Whitehouse said.

Much rests on the shoulders of Sen. Joe Manchin (D-W.Va.), the perennial swing vote in the 50-50 Senate, who has resisted calls for budget reconciliation and filibuster reform.

He sounded a skeptical note yesterday about federal investments in electric vehicles — a massive priority for climate hawks, since transportation is the nation’s top source of greenhouse gas emissions.

"I don’t remember Henry Ford, when he built the Model T, that we went out and built filling stations for him. I don’t remember that happening, but basically, we should give them incentives and help them mature," Manchin said. "We’re willing to do that, but it shouldn’t cost as far as the debt to the nation."

Senate Republicans who have been negotiating with the White House said they expect to release their detailed $1 trillion counteroffer tomorrow, but pay-fors remain a sticking point on both sides of the aisle.

Senate Commerce, Science and Transportation ranking member Roger Wicker (R-Miss.) said the counteroffer will have "hardly anything" on user fees, although Sen. John Barrasso (R-Wyo.) said new fees on electric vehicles will remain in the plan.

And the GOP remains opposed to reversing the Trump tax cuts and raising corporate rates, a key component of Biden’s initial plan.

Republicans instead are shifting their focus to unspent COVID-19 relief funds, which they say should be repurposed for infrastructure projects.

Capito, the lead negotiator on the White House talks, said COVID-19 relief funds have been a topic of discussion but that the administration never responded to Republicans.

She added that some pandemic relief funds have already been repurposed to address unaccompanied children crossing the southern border with Mexico.

"So we know they’re not opposed to repurposing COVID dollars," she said yesterday.

Van Hollen said he was skeptical that Democrats would agree to repurposing the relief funds, saying he thought it would be "a big mistake to try to claw that back."

Republicans who have been involved in the negotiations have also griped that White House staff have undercut and mischaracterized their own proposal.

"I don’t think President Biden is the problem; I think it’s the people around him," Sen. Lindsey Graham (R-S.C.) told E&E News yesterday. "They apparently have good conversations with him, but the product comes back differently than they discussed."

Pressed on the GOP complaints, White House press secretary Jen Psaki yesterday declined to comment on private conversations between Biden and Republican senators but said the president had signed off on "every single detail" in the counteroffer the White House made Friday.

"He was in the Senate for 36 years," Psaki said. "I can promise you he does not take a hands-off approach to legislating, negotiating and determining what kind of counterproposals we should put forward."

Despite those wobbles, Psaki and moderate Democrats on Capitol Hill offered an optimistic view of negotiations, with the White House’s informal deadline of Memorial Day for demonstrating progress in bipartisan negotiations fast approaching.

"We’ll see where we end up," Manchin told reporters. "Don’t give up. Y’all give up too quick."