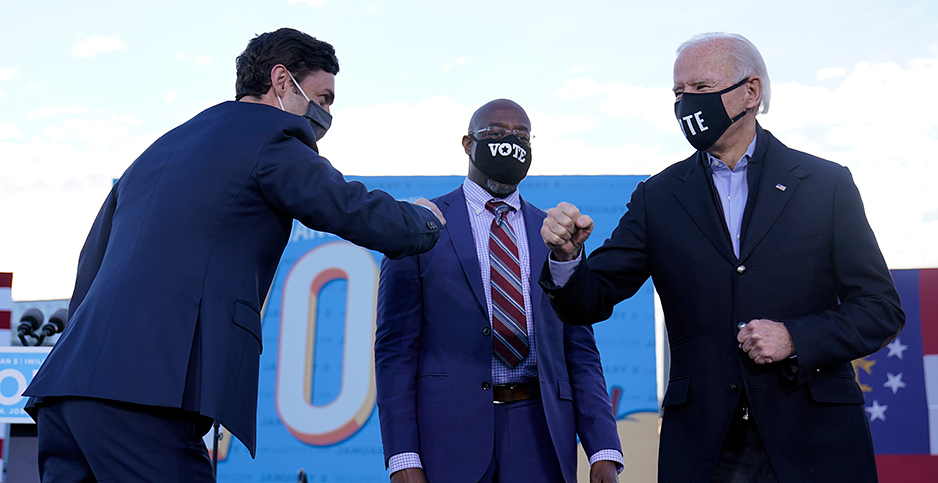 Democrats are on the path to retaking the Senate, with the Rev. Raphael Warnock projected to win one of Georgia’s runoff elections by a close margin and Jon Ossoff favored to win the other.

The Associated Press called Warnock the winner over incumbent Sen. Kelly Loeffler (R) at about 2 a.m. EST, hours after voting ended. He had 50.6% of the vote to Loeffler’s 49.4%, with 99.9% of precincts reporting.

Ossoff’s challenge against Republican David Perdue had not yet been called by AP, though Ossoff had 50.2% of the vote earlier this morning.

Warnock’s victory represents a big hit to the GOP, which has dominated Georgia politics for years. The pastor of Atlanta’s Ebenezer Baptist Church — where Martin Luther King Jr. once served — is the first Black person to win a statewide race in the Peach State.

Ossoff’s victory would clinch the Senate majority for the Democrats, giving them control of both chambers of Congress and the White House after President-elect Joe Biden’s inauguration later this month.

The parties would be tied 50 to 50 in the upper chamber, but Vice President-elect Kamala Harris would be able to break ties and Sen. Chuck Schumer (D-N.Y.) would control the legislative agenda as majority leader (see related story).

That would dramatically increase the chances for liberal policies Biden and the Democrats have floated, such as aggressive infrastructure and clean energy spending.

Biden campaigned on a $2 trillion climate change plan, and while a slim Senate majority is no guarantee that he could accomplish the goals, the Georgia wins would make it far more possible.

In a speech in the early morning hours, Warnock promised to represent all Georgians and be a uniting force in the Senate.

"Georgia, I am honored by the faith that you have shown in me. And I promise you this tonight: I am going to the Senate to work for all of Georgia," he said in remarks from his home.

"No matter who you cast your vote for in this election, in this moment in American history, Washington has a choice to make. In fact, all of us have a choice to make," he said.

"Will we continue to divide, distract and dishonor one another? Or will we love our neighbors as we love ourselves? Will we play politics games while real people suffer? Or will we win righteous fights together, standing shoulder to shoulder for the good of Georgia, for the good of our country? Will we seek to destroy each other as enemies, or heed the call towards the common good, building together what Dr. King called the ‘Beloved Community?’"

Warnock said he would fight the COVID-19 pandemic "with science and good old-fashioned common sense" and push to raise the minimum wage.

In her own speech, Loeffler was defiant. During the campaign season she repeatedly accused her opponent of pushing socialist policies like the Green New Deal — which he said he does not support — and she continued that message this morning.

"There are a lot of votes out there, as y’all know. And we have a path to victory, and we’re staying on it," the former corporate executive told a cheering crowd.

"I’m asking for every single Georgian, every single American, stay in the fight with us. We are going to keep fighting for you. This is about protecting the American dream," she said. "We’ve got some work to do here. This is a game of inches. We’re going to win this election."

Perdue’s campaign was optimistic in its own late-night statement. "As we’ve said repeatedly over the last several weeks and as recently as this evening, this is an exceptionally close election that will require time and transparency to be certain the results are fair and accurate and the voice of Georgians are heard," the campaign said, predicting that the incumbent would win.

Ossoff didn’t weigh in, but earlier in the day he promised quick economic relief action if he and Warnock won.

"We will be able to pass $2,000 stimulus checks next week when we win these races in Georgia, and get economic relief directly into the bank accounts of the American people who are suffering right now," he told reporters at an Atlanta polling site.

While President Trump supported $2,000 relief payments and legislation for them passed the House, Senate Majority Leader Mitch McConnell (R-Ky.) has thus far declined to allow a vote on a standalone bill.

Trump, meanwhile, speculated without evidence that the Republicans in the Georgia races were falling victim to fraud. He has long claimed widespread fraud in his own loss in the November election, particularly in Georgia.

"Looks like they are setting up a big ‘voter dump’ against the Republican candidates. Waiting to see how many votes they need," the president tweeted at about 10:30 p.m. last night, as numerous big-city jurisdictions worked to count votes and submit their totals to the state.

Gabriel Sterling, a top voting official in Georgia Secretary of State Brad Raffensperger’s office and a Republican, told CNN that the GOP’s losses would "fall squarely on the shoulders of President Trump and his actions since Nov. 3."

"When you tell people, your vote doesn’t count and has been stolen, and people start to believe that, then you go to the two senators and ask the secretary of state to resign and trigger a civil war in the Republican Party when we need Republicans to unite, all of that stems with his decisionmaking since the Nov. 3 election," he continued.

"With Democrats likely to control the congressional agenda, they must turn Biden’s ambitious clean energy economic recovery plan into a Day One legislative priority," he said.

Raad called on the Senate to take up Biden’s $2 trillion climate plan, which includes provisions to decarbonize the electrical grid by 2035 and direct at least 40% of climate-related investments to communities of color.

Earlier yesterday, the Biden transition team made clear that the president-elect’s climate strategy depends on the outcomes of the Georgia races.

"If the Senate should shift to be a Democratic majority, it clearly opens up clearer pathways for legislative action, and I’m sure those will become a more prominent part of the discussion," a senior Biden transition official told reporters.

The official said Biden would still seek to take bold action without a Senate majority. "But clearly we’ll be watching the Georgia election to make choices out of the gate in terms of what kind of executive authority we are crafting moving forward, and what our plans are on the Hill," the official said.