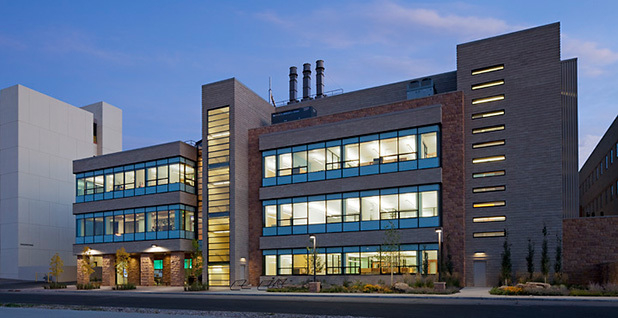 The day after the U.S. Department of the Interior announced it would pause leasing of coal on federal lands and conduct a comprehensive review of the program, Wyoming Gov. Matt Mead (R) took to the internet and proudly pledged that the Cowboy State would fight for its coal.

"We know we can improve coal’s environmental footprint while meeting increased global demand," he wrote in a column published on the online news site WyoFile on Jan. 16. "We do that through innovation, not regulation. We did not get from the candle to the light bulb through regulation."

It’s rhetoric Mead has used before, that innovation could be a way for coal to remain a dominant force in the state.

In the Wyoming Energy Strategy — the state’s blueprint for supporting its energy resources released in 2013 — finding new uses for fossil energy and investing in new technologies was listed as one of the four pillars of the plan. Last month, when the governor released an update to the strategy, he pledged a "doubling down on coal."

This, despite the growing body of evidence that coal as it is primarily used — burned to create baseload electrical power — is in trouble. The industry is facing high-profile bankruptcies, mass layoffs at the biggest mines in the Powder River Basin and natural gas prices at some of the lowest levels in history.

Right now, no energy resource needs innovation and technology’s helping hand more than coal, especially Wyoming coal. Powder River Basin coal contributed 14 percent of the gross state product and $1.3 billion in revenues in 2012. That’s about 11.2 percent of all money collected by the government that year, according to a 2015 University of Wyoming report.

Nearly 40 percent of all coal produced in the United States comes from the region.

"We’re too mineral-oriented, and our tax base shows it," said Wyoming state Sen. Michael Von Flatern (R). "Our first option is to make coal more palatable."

The making of a research institution

That effort began in earnest in 2006, when the Wyoming Legislature passed a statute creating the School of Energy Resources at the University of Wyoming, the state’s only public university.

Standing on the third floor of the building, Mary Byrnes, School of Energy Resources deputy director of energy outreach, points to a wall displaying the names of companies that donated to the school as it was being constructed. It’s a who’s who of energy giants: Encana Corp., ConocoPhillips Co., Royal Dutch Shell PLC, Marathon Oil Corp., Peabody Energy Corp., Arch Coal Inc., BP PLC.

Inside the school, there’s a 3-D visualization lab where students can input data from potential carbon reservoirs underground and then physically walk around them. On the second floor, there is a suite of laboratories where students and researchers work on enhanced oil recovery, the process of removing oil from hard-to-reach areas. Goals of the research include both developing better means of extracting the oil and mapping extraction areas with more detail. There’s also an oil and gas drilling simulator.

Coal research is done on the first floor. In the Peabody Energy Advanced Coal Technology Laboratory, one lab workspace looks like a 10th-grade biology class on steroids. Test tubes and venting hoods abound. A man in a white coat carefully handles a glass beaker filled with an bright orange substance.

Mark Northam, director of the School of Energy Resources, is steadfast in his belief that there can be a future for coal.

"If it’s going to have a future, it will be different from what it is now, and it will be driven by technology," he said. "Even if you don’t believe in climate change, markets are moving away from heavy emitters of CO2, and right now it’s coal."

He also readily recognizes it will take money to get there. So far, the school has been able to amass significant financial support. According to the school’s 2015 annual report, industry has donated $62 million to the program and the state has contributed $57 million. In addition, the school has won about $30 million in grants, primarily from the federal government.

The approach to coal is twofold. First, it is actively working to improve carbon capture utilization and storage, or CCUS. It’s a decades-old technology that involves taking the carbon dioxide emitted by power plants and injecting it underground, effectively preventing it from being released into the atmosphere. A component of that process also requires identifying underground reservoirs suitable for holding C02, which is something the university researchers are also focused on.

The second prong is finding uses for coal that do not involve burning it for electricity. Creating a new life for coal is a recent addition to the state’s research priorities, Northam said, surfacing in the last 18 months or so.

"Coal is a complex assemblage of some very valuable molecules that we would like to get our hands on if we could figure out a way to extract them from the coal," Northam said. It could be used to make things like carbon fiber, graphene, graphite, activated carbon, carbon black and a range of petrochemicals.

But even if the school is able to make commercially viable products with Wyoming coal, that won’t solve the industry’s problems. The business model that modern-day coal companies use is built on their ability to mine millions of tons of coal and sell it at a profit.

Although the world might one day see more activated carbon made with Powder River Basin coal, that isn’t going to prevent any more coal companies from declaring bankruptcy, Northam said.

"There’s just not going to be anything to replace that demand if it’s not used for electricity," he said.

Option two, according to von Flatern: cleaning up the "perceived emissions issues."

"If you can burn coal and put absolutely nothing in the atmosphere or put minimally the equivalent of natural gas in tons of C02, then what’s your argument about using it?" he said.

That is a job for CCUS.

Located 7 miles north of Gillette, the Dry Fork Station quickly rises into view out of the hilly landscape.

The coal-fired electric power plant is a "mine-to-mouth" operation, powered by coal mined from the adjacent Dry Fork mine. The plant, which opened in 2011, is owned by Basin Electric Power Cooperative and the Wyoming Municipal Power Agency, and puts about 380 megawatts on the grid, or enough power for 308,000 homes.

As far as environmental controls go, Dry Fork was constructed with the best measures $1.35 billion could buy. It employs low-nitrogen oxide burners, uses selective catalytic reduction technology to remove 98 percent of NOx before it reaches the smokestack scrubber and recycles all its water.

Plant manager Tom Stalcup said in his more than 30 years working in this field, he’s seen power plants rise to regulatory challenges. From the Clean Air Act to rules on particulate matter and mercury, each time a regulation popped up, the industry found a way to use new technology to reduce emissions.

"From the ’70s until now, we’ve continued with research and development and come up with these solutions," he said. "We’re going to get there; we always do."

That model, he says, doesn’t hold true with the latest regulation, EPA’s Clean Power Plan. Under the proposed rule, Wyoming must reduce its emissions nearly 44 percent below 2005 levels by 2030. Dry Fork Station, according to Heidi Hockett, a community representative for Basin Electric Power Cooperative, would be on the chopping block because, despite its environmental controls, the plant’s carbon dioxide measurements would make it untenable.

"It’s like comparing a ’68 VW bug to a car built in 2015," Hockett said, referring to older coal plants with the technology Dry Fork uses. "We were very proactive, and the rule doesn’t give us credit."

Now, Dry Fork is hoping to keep the lights on through carbon capture utilization and sequestration. In 2017, the Integrated Test Center will open next door to the plant.

The facility will provide space for researchers, including from the University of Wyoming, to develop technologies that take emissions from coal-fired power plants, in this case directly from the flue gas from Dry Fork Station, and use them in commercially viable ways.

It’s a $21 million public-private venture, of which $15 million is being footed by the state. The Integrated Test Center will also host a group offering $10 million in prize money for the best economic uses for carbon emissions.

Is time running out for Wyo.?

The model isn’t new. Similar carbon capture work is being done at the SaskPower plant in Canada and slated to begin at the Kemper County energy facility in Mississippi.

Both attempts at operating carbon capture technology at scale have been mired in delays and controversy. At SaskPower’s facility, there have been multiple shutdowns, costs have ballooned and the original promise of capturing 90 percent of the carbon from the plant hasn’t even come close to being realized.

Kemper, expected to open soon after more than two years of delays, is aiming to capture up to 65 percent of carbon emissions from a coal gasification plant.

Northam, from the University of Wyoming’s School of Energy Resources, said on its face, capturing carbon and keeping it out of the atmosphere is "not magic, and it’s not a technology that is difficult."

It is, however, expensive, and industry hasn’t been excited about investing in it, instead relying on government money. A report by the Congressional Research Service estimates that between 1997 and 2008, the Department of Energy provided $900 million for activities related to CCS. In 2009, DOE stepped up its game, allocating $3.38 billion in funds from the American Recovery and Reinvestment Act for carbon capture projects, according to an analysis by the Center for Climate and Energy Solutions.

Since then, Northam would characterize funding as "spotty," which has reduced research to "fits and starts."

"The only way you reduce the costs is through re-engineering of things you’ve already tried," he said. "So in order to deliver carbon capture, we’ve got to demonstrate projects, and I have a very strong sense that the federal government needs to motivate that to happen."

Some Wyoming lawmakers are incensed that the federal government has passed down regulations like the Clean Power Plan while mistakenly pointing to carbon capture as a solution.

"It’s not ready for prime time, it’s just not. The technology is not there," said Republican state Rep. Norine Kasperik. "And what the Clean Power Plan has done is make our highest technological mines and power plants illegal to build."

She said what Wyoming needs is time, enough time for the technology to catch up on carbon capture and sequestration.

And she thinks the country owes the state that, after relying on Wyoming coal to cheaply power much of the country for decades.

"Coal is in our blood," she said. "Coal has been good for this country."