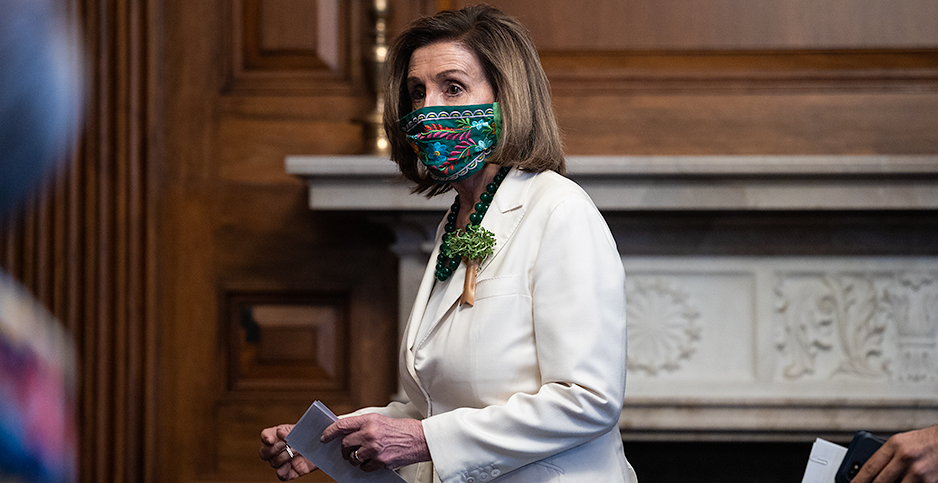 President Biden will meet with lawmakers from both parties this afternoon on his $2 trillion infrastructure proposal, after top administration officials said this weekend they expect it to start moving on Capitol Hill before Memorial Day.

In separate appearances on the Sunday news shows, Energy Secretary Jennifer Granholm and Transportation Secretary Pete Buttigieg reiterated Biden’s hope that the massive package can be assembled with Republican support but made clear the president’s patience isn’t endless.

"I do think the president wants to give it the time necessary to see if he can achieve that bipartisan support," Granholm said on ABC’s "This Week." "So hopefully, there will be progress by Memorial Day. I know that he wants to get this done by summer."

Buttigieg laid out the same timeline in an appearance on CNN’s "State of the Union." "The president wants to see major action in Congress and real progress by Memorial Day," Buttigieg said, noting that Speaker Nancy Pelosi (D-Calif.) has called for passing the package in the House in July.

"We have got some real kind of shot clocks on this in terms of things that have to get reauthorized by the end of September," said Buttigieg. "So the sooner the better, I think, is the bottom line."

At her news conference late last week, Pelosi said she expected the House Transportation and Infrastructure Committee to have produced an infrastructure package "in the month of May," and her "hope" is that the full House will have voted on it by July Fourth, or before the August recess at the latest.

Pelosi also played up her hope that the effort will be bipartisan and defended Democratic efforts to make it so. "We want bipartisanship every step of the way," Pelosi said.

"Many of the projects that we’re talking about here have regional significance, and they are bipartisan in [Republicans’] region," said the speaker. "So we are hoping that we can translate the needs of the communities across the country, which are nonpartisan, into legislation that works for everyone."

But, she added, "if we have to go to reconciliation, that’s a lever."

Republicans continue to dismiss Biden’s proposal as overly broad, while arguing that plans to pay for it by hiking corporate tax rates will damage the economic recovery (E&E Daily, April 1).

Instead of raising taxes, Brady said, the administration should look at attracting more private investment into infrastructure.

"There is a need for more investment in real infrastructure," Brady said. "Unfortunately, this bill is far more about Green New Deal provisions and tax increases than it is about America’s real needs."

Sen. Roger Wicker (R-Miss.), the ranking member on the Commerce, Science and Transportation Committee, who is planning to meet with Biden later today, said this weekend that Republicans "are willing to negotiate a much smaller package."

"You’ve got a proposal here of $2.3 trillion, 70% of which cannot by any stretch of the imagination be called infrastructure," Wicker said on ABC’s "This Week." "That’s on top of $1.9 trillion a few weeks ago, most of which was not COVID-related."

Wicker said, "We’re told another $2 trillion is on the way, and that’s on top of this $1.5 trillion skinny federal budget that the president rolled out just this past week."

The Republican asked, "Where does the spending end?"

Biden is also facing pressure from moderates and the progressive wing of the Democratic Party.

Senate Energy Chairman Joe Manchin (D-W.Va.), who holds enormous sway in the 50-50 chamber, penned an op-ed last week reiterating that he won’t vote to eliminate or weaken the filibuster, instead calling for a "new era of bipartisanship where we find common ground on the major policy debates facing our nation."

And Sen. Mark Warner (D-Va.) told reporters last week that he had concerns over the 28% corporate tax hike that Biden is pushing to pay for the infrastructure plan.

Pelosi demurred last week when asked whether Democrats would be open to lowering the cost, however, to appeal to Republicans and moderates like Manchin.

"We have big needs," she said. "I myself would rather just talk about what the needs are, where do we find our common ground to go forward. Hopefully, we can do so in a very strong, bipartisan way, and then we’ll talk about how to pay for it. But I don’t think we need to start with the money and say, ‘Our needs only are related to how little we’re willing to spend.’"

The White House and Democratic leaders also face pressure from the left to expand the infrastructure plan, with the 95-member Congressional Progressive Caucus last week listing immigration reforms as among its top priorities for infrastructure — an issue notably absent from the White House’s proposal.

Progressives are also calling for at least 40% of the plan’s funding to be steered toward "front-line" communities, a "strong" clean energy standard, the creation of "direct climate jobs" through public employment programs and for clean energy spending consistent with the goal of limiting warming to 1.5 degrees Celsius.

Advocates and groups outside Capitol Hill are also already pushing to include their priorities in Biden’s infrastructure plan.

The accelerator — introduced as a separate bill by Rep. Debbie Dingell (D-Mich.) and Sens. Ed Markey (D-Mass.) and Chris Van Hollen (D-Md.) — would act as a national green bank, with $100 billion to support clean energy, water and climate projects.

"This is in addition to the pressing need to build resilient infrastructure in communities across America. The Clean Energy and Sustainability Accelerator is the ideal vehicle for this investment," they added.

Advocates have long pushed for the accelerator proposal to be tacked on to clean energy or infrastructure legislation, and Biden’s plan includes a version of it.

It’s also part of the "Climate Leadership and Environmental Action for Our Nation’s Future Act," H.R. 1512, the sweeping climate bill introduced by Democrats on the House Energy and Commerce Committee.

Signatories of the letter include the Solar Energy Industries Association, Sierra Club, Environmental Defense Fund and League of Conservation Voters.

Committees on both sides of the Capitol will resume hearings on aspects of the Biden infrastructure plan this week.

The Senate Environment and Public Works Committee will review the long-term solvency of the highway trust fund and other user-based revenue streams Wednesday morning.

Although the panel lacks jurisdiction over the revenue aspects of infrastructure, the hearing will hear testimony on how funding uncertainty affects highway programs.

The Senate Banking, Housing and Urban Affairs Committee on Thursday morning will hear testimony on investments in public transit.

On Thursday afternoon, Buttigieg will defend the fiscal 2022 budget request before the House Transportation, Housing and Urban Development Appropriations Subcommittee.

Schedule: The Senate Environment and Public Works hearing is Wednesday, April 14, at 10 a.m. in 106 Dirksen and via webcast.

Schedule: The House Financial Services hearing is Wednesday, April 14, at 10 a.m. via webcast.

Schedule: The House Transportation and Infrastructure hearing is Wednesday, April 14, at 11 a.m. in 2167 Rayburn and via webcast.

Schedule: The Senate Banking, Housing and Urban Affairs hearing is Thursday, April 15, at 10 a.m. via webcast.