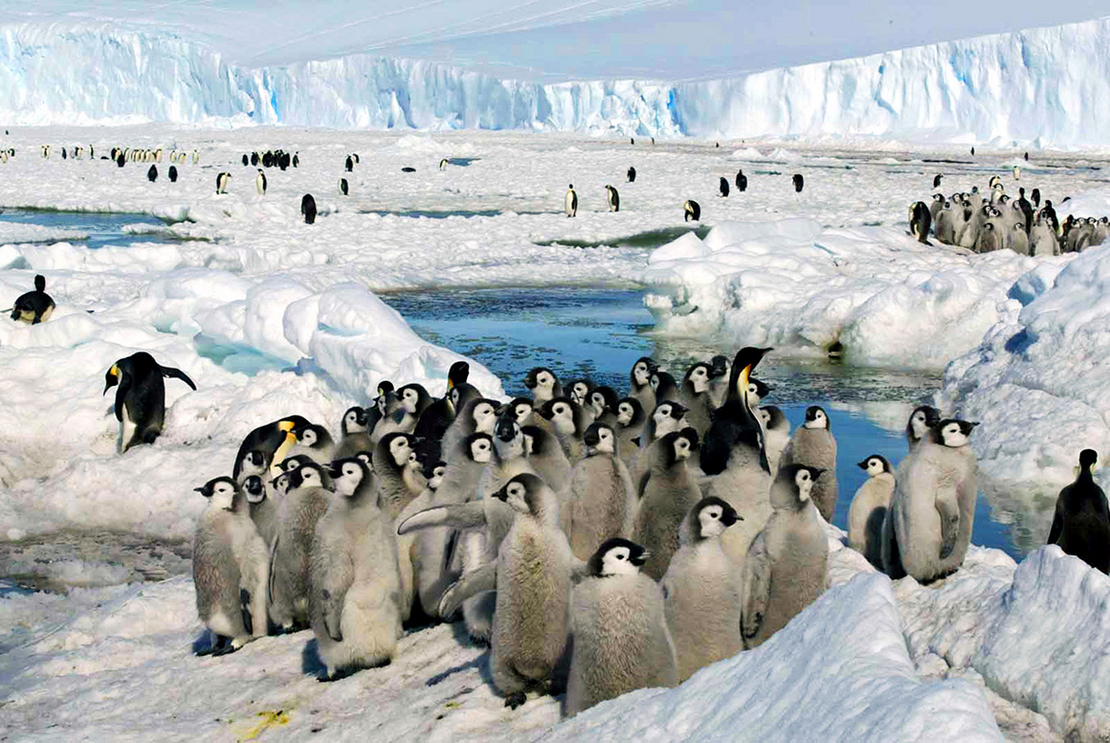 Emperor penguins huddle together on the snow in Antarctica. Officials say China has blocked efforts to step up protection of emperor penguins that are increasingly threatened by global warming. Zhang Zongtang/Xinhua via AP, file

The fate of the emperor penguin is in doubt, as global warming threatens its icy habitat — and world leaders struggle to enact protections that could buy the iconic Antarctica bird some much-needed time.

A recent meeting of the Antarctic Treaty System laid bare the uphill battle to protect the species. Dozens of nations, and a substantial body of scientific evidence, supported a proposal to give the emperor penguin special protection status under the Antarctic Treaty’s Protocol on Environmental Protection. But it took only one country — China — to block action.

The new status wouldn’t have been enough to save the species. Experts say that will require curbing global emissions, and preventing further warming. But it would have shielded the penguins from additional threats, like pollution and other human disturbances, by placing certain limits on research work, tourist operations and other human activities that come in close contact with penguin colonies.

“If a camel’s got a straw on its back, you don’t want to break the camel’s back by adding an additional straw,” said Phil Trathan, former head of conservation biology at the British Antarctic Survey and a professor at the University of Southampton.

While the formal effort ultimately failed, many nations are still likely to implement similar protections on their own. A statement from this year’s host country, Germany, noted that “most Parties indicated that they would nonetheless implement the draft action plan” of their own accord.

But scientists warn that without global climate action, the regal black-and-white bird will face serious declines within a few decades. One recent study found that if world leaders fail to strengthen existing climate policies, emperor penguin colonies are likely to go extinct — or at least shrink to unsustainable numbers — by the end of this century.

If the world manages to achieve Paris Agreement goals and keep global warming to 1.5 degrees Celsius, many penguin colonies would be saved, according to another study by many of the same researchers. But even under that scenario, nearly a third of the planet’s emperor penguins could disappear.

“For me, I think it’s a done deal now,” Trathan said. “The projections suggest that by the middle of this century, in two or three decades’ time, we’ll begin to see declines.”

The emperor penguin is unique among birds: It’s the only species that exclusively breeds on the surface of Antarctic sea ice floating in the Southern Ocean. In fact, it has almost no need to ever set foot on solid land.

At the beginning of the winter, emperor penguins pair up and the female typically lays a single egg on the ice. The females then leave the colony for the season to hunt, leaving the males behind to protect and incubate the eggs.

In late winter or early spring, the females return so the hungry males have a chance to feed and recover. The chicks eventually hatch, and both parents assume responsibility for feeding their babies.

By the Antarctic summer, in December or January, the chicks are largely grown. The parents molt and begin fattening up, to start the process all over again for the next breeding season.

Stable sea ice is critical throughout this entire process.

Many of the prey animals that emperor penguins eat are highly dependent on sea ice, making it an essential hunting ground. Antarctic silverfish, for instance, lay their eggs among the ice. Krill depend on it as well.

Solid ice also is crucial for the baby penguins’ survival.

“Chicks aren’t waterproof until they get their juvenile plumage,” Trathan said. “If they go into the water, then they will basically freeze to death. So they need a stable platform.”

Even after the chicks are grown, adult penguins need a stable surface to stand on while they molt and wait for their new feathers to grow in.

In other words: If Antarctic sea ice disappears, it’s likely the penguins will, too.

But charting that decline is complicated by the fact that Antarctic sea ice behaves in messy and unpredictable ways.

Unlike the Arctic, where sea ice has been rapidly vanishing for decades, Antarctic sea ice was actually expanding until around 2014. That year, the trend abruptly reversed, with Antarctic sea ice hitting a record-low minimum in 2017. It then rebounded slightly, only to hit another record low earlier this year.

Some of it is just natural fluctuations in the climate, causing sea ice to sometimes expand and sometimes shrink. Some of it may also be related to the ongoing recovery of the Antarctic ozone hole, which has been slowly healing since the 1980s. Changes in the ozone layer can affect air circulation in the Earth’s atmosphere, altering wind patterns in ways that can affect the movement of sea ice.

At the same time, the influence of human-caused climate change is steadily rising in the background. That influence is likely to grow stronger and stronger as global temperatures continue to climb, eventually becoming the dominant force. And when that happens, experts expect that sea ice will probably start to shrink for the long term.

That’s bad news for the birds.

At the recent Antarctic Treaty meeting, the China delegation presented various documents, which E&E News has reviewed, expressing skepticism about the plight of the emperor penguin.

One of the country’s top arguments was that polar bears — widely considered by experts to be threatened by climate change — may be increasing in some parts of the Arctic. Because similar models are used to make projections about emperor penguin populations, the documents suggested that the science may be uncertain.

The China delegation based its argument on a pair of articles written by Susan Crockford, a self-described zoologist and blogger. One article argued that polar bear populations have not yet conclusively been harmed by climate change and that recent increased protections for the bears are unnecessary. The other made a similar case about emperor penguins.

Polar bear scientists acknowledge that it’s been difficult to identify recent trends in polar bear populations, in part because the bears are so elusive and in part because declining Arctic sea ice makes it harder to track them. But they widely agree that polar bears, which rely on Arctic sea ice to hunt, are seriously threatened by global warming.

Climate scientists also have long warned against Crockford’s work and climate denialism. A 2017 paper in the journal BioScience, authored by more than a dozen researchers, including prominent climate scientists, noted that “Crockford has neither conducted any original research nor published any articles in the peer-reviewed literature on the effects of sea ice on the population dynamics of polar bears.”

The paper also noted that Crockford has published a number of briefings through the Global Warming Policy Foundation, a conservative United Kingdom-based think tank known for challenging the science of climate change and suggesting that policies aimed at reducing greenhouse gas emissions may be “doing more harm than good.”

The Daily Maverick previously reported on China’s use of Crockford’s work. In a response, Crockford wrote a blog post, pointing out that she has recently published a peer-reviewed paper on polar bear ecology. (The paper examines historical polar bear populations, not present-day populations, using fossils and archaeological remains mainly dating back anywhere from a few hundred years to a few thousand years.)

Crockford suggested that her influence on the Chinese delegation and the Antarctic Treaty meeting was “a win for scientific transparency.”

But others see it as indicative of the challenge in getting global protections for the penguin.

“Everybody but one country was in favor,” said Ricardo Roura, a senior adviser at the conservation organization Antarctic and Southern Ocean Coalition, who attended the meeting. “And because the treaty makes decisions by consensus — all the bodies of the Antarctic Treaty System make decisions by consensus — it meant that one country would effectively block the decision.”

The role of Antarctic geopolitics

Rather than accepting an immediate increase in emperor penguin protections, China proposed a plan for increased monitoring and research of the species. In the documents presented at the treaty meeting, the country’s delegation pointed out that the emperor penguin is currently listed as “near threatened” by the International Union for Conservation of Nature and suggested that climate-related declines in its populations may not occur for decades.

The IUCN states in its most recent assessment that projections for the next few generations of emperor penguins may not decline rapidly enough to exceed the threshold for a “threatened” listing — but that the trajectory is likely to change in a few decades. It notes that “future climate scenarios predict a rapid increase in the rate of population decline, such that without mitigation the species will begin to decline rapidly within one to two generations.”

The Chinese delegation’s actions “seemed more of a quasipolitical maneuver than really a scientific move,” Roura said. “Because, in fact, I don’t think [the increased protections] would have any significant effect at this point on Chinese operations in the Antarctic or anything like that.”

The issue over emperor penguins, Roura added, is symbolic of a “larger reality” involving Antarctic geopolitics.

“Issues to do with the inability to make very strong action on environmental protection reflects problems in the Antarctic Treaty System at the moment,” he said.

For years, the treaty has experienced disputes over fisheries, marine-protected areas and other marine life components of the system, he said. Often, these are issues in which a few parties are at odds with the majority.

Last year, for instance, members of the Antarctic Treaty System’s Convention on the Conservation of Antarctic Marine Living Resources failed for the fifth consecutive year to establish new marine-protected areas in certain parts of the Southern Ocean. The proposals faced opposition from Russia and China, who have opposed new protected areas in the past, despite support from other member parties.

These kinds of disputes are now “kind of expanding a bit,” Roura said. “Not because countries cannot agree on consensus — it has worked on the basis of consensus for 60 years. It’s just there’s some kind of new politics influencing them.”

Seeing new environmental protections blocked by one or very few parties is “really frustrating,” he added. “Especially when, give or take, everybody else is supportive.”