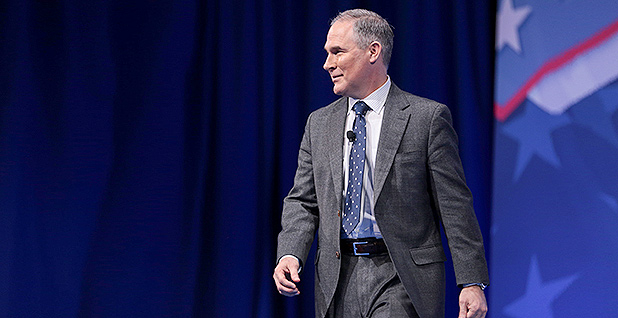 But Pruitt didn’t seem convinced, according to one source with knowledge of the discussion. The EPA chief could instead forgo replacing the carbon rule and decide to challenge the agency’s underlying endangerment finding, which requires it to reduce greenhouse gas emissions.

EPA has already drafted a rulemaking to revoke the Obama administration’s Clean Power Plan, which requires power plants to cut emissions 32 percent by 2030 (Climatewire, June 12). Pruitt at some point must decide whether to write a new regulation to potentially satisfy the endangerment finding.

EPA officials under Obama argued that the rule would speed an industry shift away from coal and toward cheaper natural gas and renewables, while letting states chart their own paths. Legal challengers, including Pruitt, said EPA shouldn’t have looked for carbon reductions "outside the fence line" of coal-fired power plants.

The investor-owned utility trade group Edison Electric Institute supports the idea of developing a replacement carbon regulation if EPA follows through with rescinding the Clean Power Plan as expected. There wasn’t complete consensus on the idea at the meeting, however. Conservative interests could also push back on the strategy.

"President Trump said on the campaign trail that he would stand up for the people and industries that have been left behind by his predecessor’s environmental agenda," said Chrissy Harbin, vice president of external affairs for Americans for Prosperity. "And he has begun to deliver on these promises once in office, by pulling out of the Paris Agreement and directing the EPA to dismantle the Clean Power Plan."

A different source who attended the meeting with Pruitt described it as a "high-level listening session," where Pruitt solicited feedback but didn’t dig into policy possibilities.

"There wasn’t a lot of in-depth discussion," he said.

The power sector has nearly outpaced the regulation that EPA finalized in 2015, as natural gas has stayed inexpensive and renewable power has gotten cheaper. One industry source said Pruitt wasn’t hearing that message.

"What I got back from it was the only time the administrator really perked up was when he heard the word ‘coal,’" he said. "None of our people are ever going to be building a coal plant again. It’s devoid of reality."

That source expects that Pruitt still intends to fight EPA’s endangerment finding, which requires the agency to regulate greenhouse gases. A decision to replace the Clean Power Plan would be a tacit acknowledgement that EPA will eventually have to set rules for power plants.

"Unfortunately, we’re kind of in an awkward position," the source said. "They view us as we were the industry at the table for eight years with the Obama administration working out the Clean Power Plan."