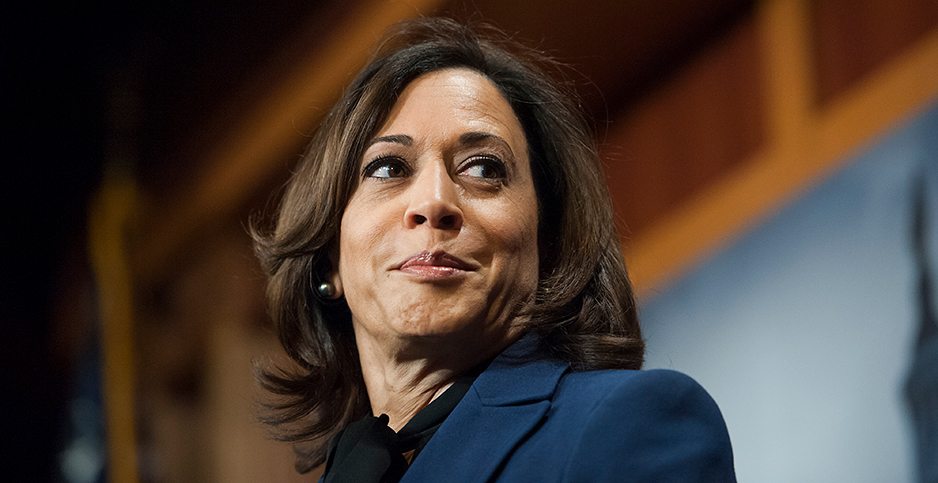 Presumptive Democratic presidential nominee Joe Biden’s choice of Kamala Harris as his running mate brings significant environmental justice credentials to the ticket, just as awareness and concern about the outsize impact of pollution on minority communities are getting unprecedented attention.

The former vice president announced his pick of California’s junior senator in an email to supporters yesterday, citing her experience as the Golden State’s attorney general, which overlapped with Biden’s late son Beau’s time as Delaware attorney general.

"He had enormous respect for her and her work. I thought a lot about that as I made this decision," he wrote. "There is no one’s opinion I valued more than Beau’s and I’m proud to have Kamala standing with me on this campaign."

Harris, 55, who ran for president herself in this year’s race, was long seen as a top choice for the vice presidential nomination because she checks boxes that Biden does not — a woman of color who is in touch with the progressive wing of the party.

She could help the 77-year-old Biden bolster support with younger voters and the Black community, and to that end, Harris has been a prominent proponent of environmental justice legislation on Capitol Hill.

It earned her immediate praise from environmentalists when the announcement dropped.

"Kamala Harris centered environmental justice in her campaign plan as a presidential candidate," said Jamal Raad, campaign director of Evergreen Action. "Since then, she has centered that work in her legislative agenda."

And like Biden, Harris was responsive to demands from environmental activists on the presidential campaign trail, Raad said.

The bill offers an example of how Harris could shape the issue in a Biden administration should the pair defeat President Trump in November.

The "Climate Equity Act" would create an Office of Climate and Environmental Justice Accountability at the White House, which would inject environmental justice perspectives into federal rulemakings (E&E Daily, Aug. 7).

Harris is also a lead sponsor of the Senate version of the "Environmental Justice for All Act," a sweeping bill that would amend the nation’s fundamental civil rights and environmental laws.

A first for Calif.

Environmental justice credentials aside, the fact that Harris is from California is a huge benefit to climate on the ticket, said Paul Bledsoe, a former climate adviser in the Clinton White House who serves on the executive council of Clean Energy for Biden.

She is the first Californian ever on a Democratic presidential ticket, Bledsoe noted, despite the state’s central role in progressive politics and environmentalism.

"California has been the most important state on the environment for 60 years and has been by far the greatest innovator on climate policy among the states," Bledsoe said.

"Having a Californian on the ticket reinforces the centrality of climate action and, in fact, our ability to cut emissions while growing the economy," he added.

Harris is also a tested campaigner after her 2020 presidential bid. She’ll face off against Vice President Mike Pence in the first vice presidential debate in October.

"I just think Harris proved that she is a tough customer when it comes to the campaign trail and her debating skills," Bledsoe said. "I think she’s going to be going after Donald J. Trump with both barrels."

Harris’ time as California’s top prosecutor could bolster Biden’s pledge to crack down on companies that pollute.

Asked in December about prosecuting fossil fuel executives, he said "we should put them in jail," and he pledged to create an environmental justice division in the Justice Department to focus more resources on polluting companies.

Harris investigated Exxon Mobil Corp. over accusations that it lied to the public about climate science and was one of the first 2020 presidential candidates to float prosecuting fossil fuel executives for causing climate change.

"I think her willingness to take a stand on that issue created space for other candidates to embrace that approach," said Jenny Marienau Zimmer, campaign manager at 350 Action.

"It’s done a lot for moving the narrative on the individual culpability of fossil fuel executives for the climate crisis, which is good."

Despite her progressive voting record in the Senate, some activists have criticized her record as a prosecutor and labeled her a "cop" at a time when racial justice advocates on the left are increasingly critical of police.

Varshini Prakash, co-founder of the Sunrise Movement, said yesterday that Harris had made "mistakes" as a prosecutor, though she added a Biden-Harris ticket could ultimately "lay the groundwork for a Green New Deal."

Plus, Prakash said, Harris was among the first candidates to back eliminating the filibuster, a top priority for progressives who worry Republicans will block any attempt at climate legislation in the Senate.

"Throughout the course of her campaign for President, Senator Kamala Harris showed her responsiveness to activist and movement pressure to make climate a top priority, and demonstrated her willingness to be held accountable," Prakash said in a statement.

"She took our No Fossil Fuel Money Pledge, ran on the Green New Deal as a core part of her platform, and mentioned it more in the Presidential debates than almost any other candidate."

In the Senate, Harris also left the Environment and Public Works Committee to take a more high-profile spot on the Judiciary Committee.

It left California without a senator on EPW for the first time in decades, even as the Trump administration took aim at the state’s Clean Air Act waiver authority.

Still, environmentalists generally praised her move to Judiciary, which allowed her to vet Trump administration court nominees, and said she brought an encouraging green focus to the panel.

Trump’s campaign immediately labeled Harris as a part of the "radical left."

"With the selection of Kamala Harris as his running mate, this has completed the leftist takeover of the party and of their radical agenda," Sen. Marsha Blackburn (R-Tenn.), a Trump surrogate, told reporters.

"Kamala Harris will be the most liberal leftist nominee for VP that our country has ever seen."

Blackburn specifically pointed to Harris’ support for the Green New Deal. "This would not only cost millions of Americans their jobs, it would take another $2,000 out of every family’s pocketbook, and would really take away their cars and even their red meat," she said, repeating arguments that Green New Deal supporters contest. "This is a great example of how they’ve really tilted so far left."

Trump said Harris’ opposition to hydraulic fracturing and her support for a nationwide fracking ban will be a detriment in some important states.

"She’s against fracking. … She’s against petroleum products. I mean, how do you do that and go into Pennsylvania or Ohio or Oklahoma or the great state of Texas?" he said in a White House briefing. "Fracking’s a big deal."

Biden had committed earlier this year to picking a woman to be his running mate. Harris beat out a handful of other contenders, including Rep. Karen Bass of California, Sen. Tammy Duckworth of Illinois and former national security adviser Susan Rice (E&E Daily, Aug. 3).