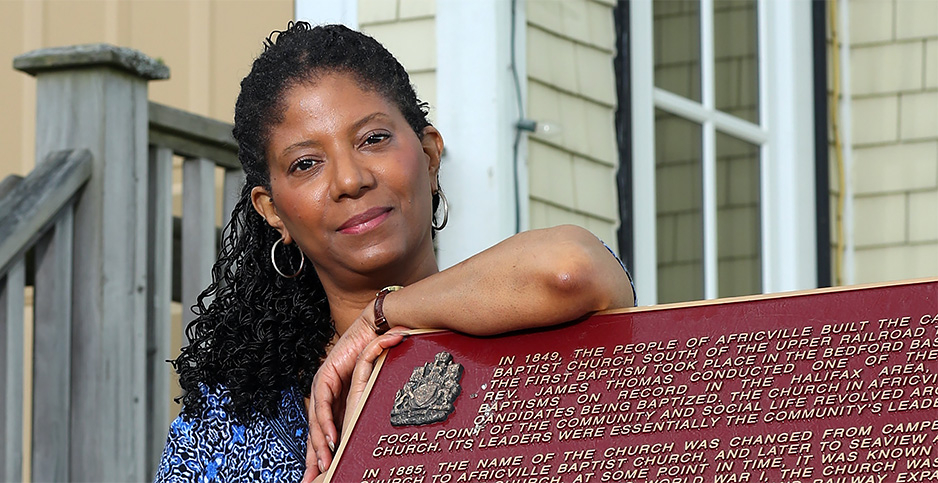 Ingrid Waldron is a leading scholar on environmental racism whose book "There's Something In The Water: Environmental Racism in Indigenous & Black Communities" inspired a Netflix documentary of the same name. Ingrid Waldron

Ingrid Waldron never expected to collaborate with a famous actress on a Netflix movie about environmental racism.

Waldron, a leading scholar on environmental health inequities at Dalhousie University in Canada, was scrolling through Twitter one day when she noticed a new follower named Ellen Page.

It turned out that Page, a Canadian actress who had starring roles in the movies "Juno" and "Inception," had discovered Waldron’s book "There’s Something In The Water: Environmental Racism in Indigenous & Black Communities."

The duo ended up making a movie based on the book, which tells the story of three communities in Nova Scotia mobilizing against environmental hazards in their backyards.

The movie premiered at the Toronto International Film Festival last September and was released on Netflix on March 27.

Born in Montreal to Trinidadian parents, Waldron graduated from McGill University before getting a master’s from the University of London and a doctorate from the University of Toronto. She serves as an associate professor at Dalhousie University’s School of Nursing and as director of the Environmental Noxiousness, Racial Inequities and Community Health (ENRICH) Project.

Waldron recently spoke with E&E News about Canadian and American attitudes toward race, the Black Lives Matter protests and pollution as a form of violence.

The use of the term "environmental justice" is problematic to me for two main reasons. No. 1, it erases the centrality of race. The reality is that nonwhite communities — including black, indigenous and Latino communities — are disproportionately affected by environmental hazards and pollution. And if that’s the case, let’s name it.

No. 2, when you talk about justice, you’re talking about the end goal. But I always say, if you go to the doctor, you don’t want the doctor to give you the prescription or treatment until you hear what the doctor has to say about the diagnosis.

So similarly, we need to first diagnose the causal factor of racism before we can actually develop the tools and the apparatus that’s needed to bring about environmental justice.

How would you define environmental racism?

There are several definitions, but I’ll give you the main one.

Environmental racism is racial discrimination that results in the disproportionate siting of contamination, polluting industries and environmentally hazardous projects in minority communities that are often also poor or low-income.

Have you been following the protests against systemic racism and police brutality in the United States?

Yes, I have, and we’ve had similar protests in Canada. And I believe there is a strong connection between police brutality and environmental racism.

While they’re two different things, to me they’re very similar because they’re both forms of systemic violence that is primarily perpetrated against black and brown bodies. Pollution is a form of violence because it can inflict bodily harm and psychological harm.

Why did you decide to write the book "There’s Something in the Water"?

Based on anecdotal experience, I would say that’s an American attitude as well.

Oh, trust me. Yes, America has a race problem. But when I turn on American TV, which is what I mostly watch, whether it’s CNN or PBS or other channels, you are talking about race. And there are more black experts, professors and legal scholars featured on the shows. So there is a conversation happening in the United States. People don’t like to talk about it, but it is happening.

I would also say that I certainly built on the work of scholars in the United States. I would point to somebody like Dr. Robert Bullard in Houston, who is the grandfather or the father of environmental racism work in the United States, right? I also talked a lot about intersectionality, which was a term coined by black American legal scholar Kimberlé Crenshaw.

Can you summarize the book for people who haven’t read it?

The book describes the environmental problems and the resulting health impacts facing black and indigenous communities in the Canadian province of Nova Scotia, as well as the grassroots mobilization and resistance of those communities.

How did you initially connect with Ellen Page about turning your book into a movie?

One day in October 2018, I went to the Twitter page for my environmental racism project and noticed a new follower named Ellen Page. Her Twitter bio didn’t say anything about her profession. It didn’t say she was an actress. It just said, "I’m a tiny Canadian."

So I didn’t think much of it. I didn’t think it was Ellen Page the actress, although I had seen her movie "Juno" twice in 2007, and I had been like, "Who is this actress? She is fantastic. She’s blowing everyone away on that screen."

About two weeks later, I came back to the Twitter page and noticed that this Ellen Page person was really promoting my book. At that point, I realized it was the actress, and I couldn’t believe it because I’d never had a celebrity following my work.

It turned out that Ellen Page was originally from Nova Scotia, and she had gotten involved in environmental activism and discovered my work. So I decided to message her on Twitter. And she responded and said, "I want to use my platform and my celebrity to elevate what you’re doing."

We ended up having a phone call in December 2018. I was extremely nervous. [Laughs] But Ellen is so down to earth that I felt like I was talking to a friend. Then we had another conversation in the new year, in January 2019, and that’s when we came up with the idea to turn the book into a film.

Ellen came up to Nova Scotia in April 2019 with co-director Ian Daniel, and they filmed everything in just seven days. After reviewing the footage, we all decided to turn it into a 70-minute film that would premiere at a prestigious film festival, rather than a shorter film that we would just post on Twitter. And it ended up premiering at the 2019 Toronto International Film Festival and then getting released on Netflix on March 27.

When I watched the film on Netflix, I was struck by how it portrayed environmental racism as a choice, whether conscious or not, about who matters in our society and who deserves to be burdened with high levels of pollution.

Yeah, it’s really about who is seen as having value and worth, and who isn’t. When you think about the intersection of race and class and poverty, right there it tells you who matters most. It’s people who are wealthy, and certainly people who are white, who are valued most in our society. And people who are not those things are valued the least, and their demands are less likely to be heard by the government. So to me, environmental racism is a perfect example of devalued black and indigenous lives.

Do you have any updates on the communities featured in the film?

I do have updates, and they’re all positive. There’s actually a stunning update with respect to Ellen Page. You know how the film mentions that the black community in the town of Shelburne relies on contaminated well water, while the white community relies on municipal water? Well, Ellen donated money — up to $25,000 for installation and $5,000 for maintenance — so the black community could have access to clean drinking water. She wanted to keep it a secret because she’s so humble, but eventually the media got word.