EV sales have doubled. Is a ‘tidal wave’ coming? 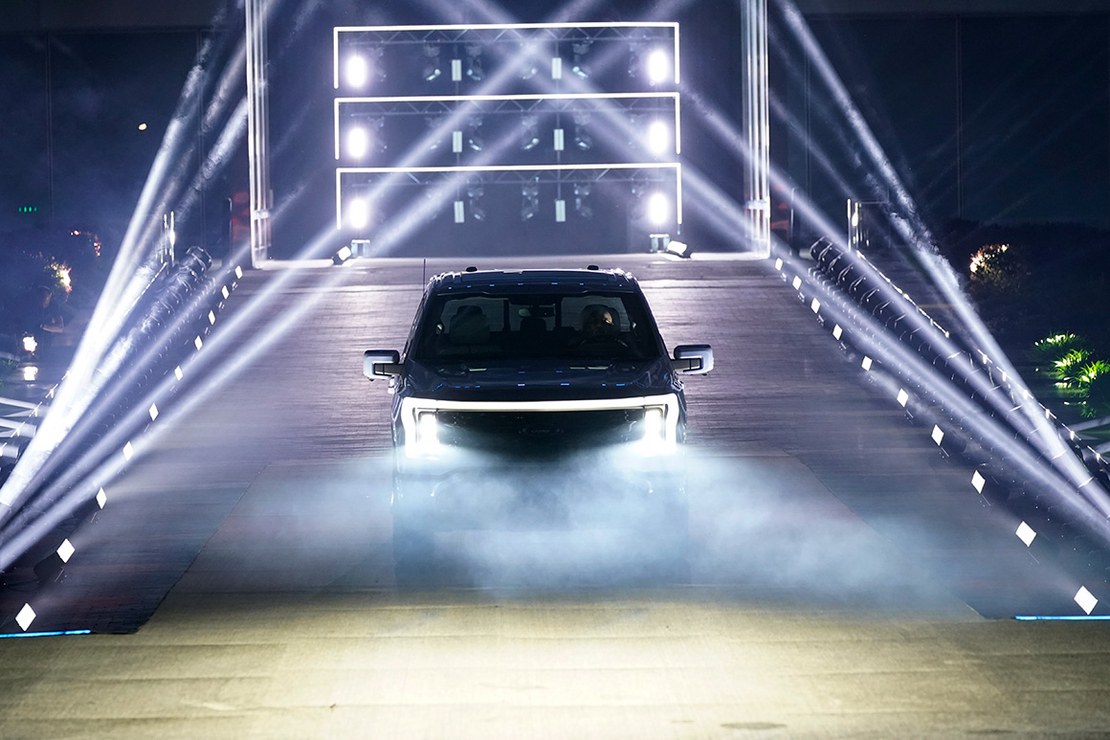 The Ford F-150 Lightning is unveiled May 19 in Dearborn, Mich. Ford Motor Co. has since received more than 130,000 reservations for the electric vehicle. Carlos Osorio/AP Photo

Electric vehicle sales are booming in the U.S., with purchases nearly doubling over a year ago.

That trend is chipping away at the long-held narrative that drivers aren’t ready for electric cars, and it’s leading some analysts to recalibrate their predictions.

“We used to have a lot of very definitive forecasts,” said Tyson Jominy, vice president of data and analytics at J.D. Power, a global consumer intelligence company based in Michigan. “We’ve had to kind of blow those up because the rate of adoption is going much quicker.”

Last year, electric vehicles accounted for about 2 percent of all car sales. This summer, that number jumped to nearly 5 percent of light-duty vehicles like SUVs and sedans and more than 20 percent of all passenger vehicles sales, according to recent data (Climatewire, Sept. 24).

However, higher adoption rates of EVs could stall without stronger federal and state policies, advocates warn, hampering President Biden’s goal of decarbonizing the sector by midcentury. Still, the recent uptick in sales is notable, stemming, in part, from a proliferation of vehicle models across manufacturers, increased consumer awareness and government support.

This week, Ford Motor Co. and SK Innovation announced plans to spend $11.4 billion on new production sites in Tennessee and Kentucky to build EVs and the batteries that power them (Energywire, Sept. 28). The company, along with General Motors Co., Stellantis and others, anticipates that 40 to 50 percent of car sales will be electric by 2030, which is in line with the Biden administration’s plan.

The transportation sector is the largest contributor of greenhouse gases in the United States, representing 29 percent of total emissions. Cars release the bulk of those heat-trapping gases.

Analysts say the surge in EV demand is in part attributable to the influx of new models.

“Consumer choice has exploded,” said Chris Harto, a senior transportation and energy policy analyst at Consumer Reports. “Up until a year or two ago, if you wanted an EV, you had to get a compact car, which, even for gasoline cars, compact cars are not very popular.”

SUVs account for just shy of 60 percent of vehicle sales in the U.S. So, unless motorists wanted a small EV car or a pricey Tesla, they were out of luck.

That’s no longer the case.

There are smaller crossovers like the Volkswagen ID.4 and upcoming Hyundai Ioniq 5. More midsize crossovers like the Toyota bZ4X are on the way. And in 2023, Ford plans to offer larger SUVs, such as electric versions of its Explorer and Lincoln Aviator.

Full-sized pickup trucks include Ford’s F-150 Lightning, which has accumulated more than 130,000 reservations since its debut last May, along with electric versions of the Chevy Silverado, GMC Sierra and Dodge Ram.

“So now we’re getting to the stage where, over the next year or so, in almost any market segment, you will be able to find an EV that probably meets what you’re looking for,” said Sam Abuelsamid, a principal analyst at Guidehouse Insights.

By the end of next year, an additional 40 EV models are expected to be available in the U.S. market, Abuelsamid said, and by middecade there will be over 500 EV nameplates available globally.

“They’re about 48 percent loyal to their brand,” Jominy of J.D. Power said. “So if there’s a Hyundai or a Tesla in the segment you’re considering but you don’t currently own that, you’re not very likely to consider it.”

Fleet owners, however, may be more flexible.

A survey published yesterday of 28 major corporations, including Amazon.com Inc. and T-Mobile, found that respondents plan to buy at least 377,750 U.S.-based zero-emission vehicles over the next five years — and 95 percent of them said they would switch vehicle manufacturers in order to get the specific capacity and features they need.

Another factor potentially contributing to EV demand is something called the network effect. A Consumer Reports survey published last year found that 7 in 10 adults in the U.S. with a valid driver’s license were interested in getting an EV. But that interest tripled for drivers who had had direct experience with one, whether that was driving an EV, riding in one or knowing someone who owns one.

“So those network effects are starting to take hold as more and more people buy and own EVs,” Harto of Consumer Reports said. “The problem is that only 6 percent of the population in our survey had that level of experience.”

A hill ahead for EVs

“It is a matter of time, but the timeline is so dependent on public policy and other factors that it could be stretched out for decades,” said Nick Nigro, founder of Atlas Public Policy. “And it’s not like conventional vehicle technology will just sit idle; it will continue to improve as well. And so there will be ebbs and flows for EVs as the market ramps up.”

A significant boost in the EV timeline could be dependent on two pieces of legislation currently in Congress: the $3.5 trillion reconciliation package and the $1.2 trillion bipartisan infrastructure deal.

“People are really starting to understand that EVs are here to stay, and if we can pass the infrastructure and reconciliation bills, then they’re going to have a huge incentive to go out and get that EV,” said Paul Bledsoe, a former Senate Finance Committee staff member who now works with the Progressive Policy Institute.

Tucked inside the reconciliation bill is a provision that would offer a $7,500 EV tax credit. An additional $4,500 incentive would be available for union-made EVs assembled in the U.S., while the infrastructure package includes funding for EV charging stations.

“The total incentive is $12,500. That’s big money. That’s the largest ever for a consumer incentive in the history of the country,” said Bledsoe, who also worked on energy and climate in the Clinton and Obama administrations.

“If we pass these bills, you’re going to see electric vehicle-like acceleration in market demand. Zero to sixty in about 2 seconds.”

The road ahead for both pieces of legislation is riddled with obstacles. And even if the tax incentives survive unscathed, funding allocation and execution could pose additional hurdles, said Gallentine of AEE.

“We have a bunch of members who do physical goods distribution who want to electrify their fleet, and in a lot of states they just don’t have the framework to be able to do that,” he said. “So we’re starting to talk to state regulators and legislators about, ‘Do you guys have a plan for how you might spend this money; do you have programs in place to move this infrastructure money out the door quickly?’”

Brianne Eby, senior policy analyst at the Eno Center for Transportation, said market movement has to work in tandem with federal and state policies to accomplish a suite of goals.

“There’s investments in infrastructure that support EVs, so that’s direct government support for public charging networks both on highways, but then also in residential areas and businesses. There’s government coordination with and support for utilities to upgrade their distribution networks for faster charging,” she said. “And also supporting supply chain and workforce demands for domestic production.”

And while EVs still make up a small percentage of the overall market, analysts say the writing is on the wall.

“The bottom line is the investment dollars are now all going toward EVs, which means that the tidal wave is coming,” Jominy said.