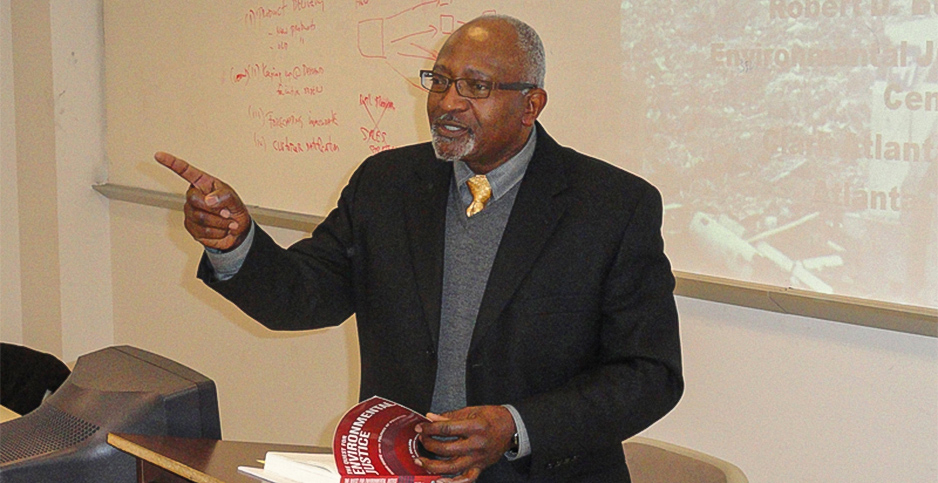 "We have never had a White House committee on environmental justice at this level," he told E&E News during a phone interview.

"I’m expecting that this administration will go full force," Bullard said. "And given the rollout of many of the appointments and the policy framings in the various departments, I see this as an excellent opportunity to see environmental justice go from a footnote to a headline."

Bullard, a Texas Southern University professor long regarded as the father of environmental justice, is among the 26 seasoned activists and justice leaders on the council, which convenes virtually today for the first time (Greenwire, March 29).

The meeting comes as activists implore the Biden administration to act boldly and elevate environmental justice and other progressive priorities.

That includes enforcing environmental crimes, building green infrastructure and investing in communities that have long been marginalized.

In an open letter published yesterday in Grist, the pair declared that "Black, brown, and Indigenous people across America face disproportionate health burdens from environmental pollution."

The open letter said, "Through no fault of their own, frontline communities have been marginalized, disinvested, and disempowered. It is time that our country secures justice for these communities."

McCarthy and Martinez said part of the problem rests with the fact that marginalized people have lacked a seat at the table. They billed the council as a remedy.

Among a list of items for the council’s review are climate change mitigation and disaster management, toxics, public lands, clean energy transition, tribal issues, and civil rights under the National Environmental Policy Act, according to the EPA website.

The new panel will partner with a similar group hosted by EPA. But establishing the White House council is seen as a nod to the belief that environmental and climate justice touches myriad federal agencies beyond agencies like EPA and the Interior Department.

Bullard talked about how the pandemic has disproportionately hurt Black and Latino communities, leaving people throughout the country disillusioned.

But he said frequent Zoom meetings and other remote capabilities have allowed a diverse array of people to give the new administration input.

Bullard said it’s important "to make sure we are not just talking about individuals who are technocrats or lawyers but getting people from various disciplines who can come in those rooms and give perspectives when ordinarily they have been left out."

He said, "We are in a new day. 2021 is a year that I think will be a year of justice. And because of the converging threats and the rediscovery of racial justice and the impact that systemic racism has had on every aspect of institution in our society. There’s an awakening that is intergenerational. It’s not just old folks like myself who came out of the ’60s who are talking about that."

‘Time to get to work’

One of those younger activists is Jerome Foster, executive director at OneMillionofUs, an international youth-led progressive advocacy group.

He tweeted a photo of himself yesterday demonstrating in Washington — in front of the White House and Supreme Court — in support of the Juliana v. United States kids climate litigation.

"It has been a long journey — from climate striking in front of the White House for 58 weeks — to now working inside of its walls to craft reform," he tweeted yesterday. "It’s time to get to work!"

It has been a long journey – from climate striking in front of the White House for 58 weeks – to now working inside of its walls to craft reform.

It’s time to get to work! w/ @POTUS @WhiteHouse pic.twitter.com/a6Rwd8OWqj

Bullard underscored the simplicity of what needs to be done. "It’s not magic," he said. "It’s not smoke and mirrors. It’s looking at the facts and what people are saying."

So far, he said, the Biden administration is on track to accomplish stated priorities within the first 100 days.