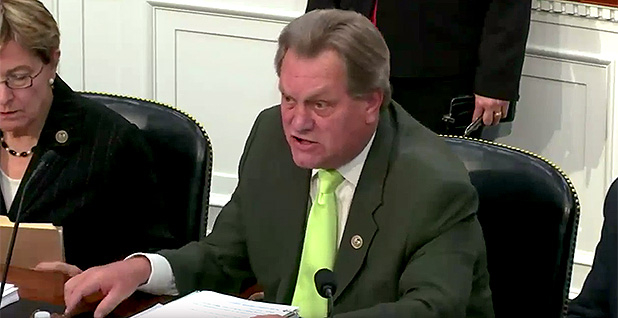 After spending much of the last six years wielding legislative riders against Obama administration policies they opposed, congressional Republicans are getting creative in crafting similar provisions they hope will be signed by a like-minded president.

Tucked into the fiscal 2018 energy-water spending bill approved yesterday by a House subcommittee is a provision that "authorizes" U.S. EPA and the Army Corps of Engineers to withdraw the Obama-era Waters of the United States rule "without regard to any provision of statute or regulation that establishes a requirement for such withdrawal."

Rep. Mike Simpson (R-Idaho), chairman of the Energy and Water Development Appropriations Subcommittee that wrote the bill, said this week the provision was a "kind of new" approach intended to shield the administration’s WOTUS repeal from the requirements of the Administrative Procedure Act.

"Some people wanted some support for [withdrawing] WOTUS," he told E&E News on Tuesday, the day the bill was unveiled and EPA Administrator Scott Pruitt unveiled the agency’s plans for the WOTUS repeal (Greenwire, June 27).

Asked whether people might see provisions targeting other Obama-era rules during the fiscal 2018 appropriations process, Simpson responded, "You might."

Democratic aides said Republicans wanted to include the provision in the fiscal 2017 omnibus President Trump signed into law last month, but were rebuffed. A similar provision is likely to be included in the House’s upcoming fiscal 2018 Interior-Environment spending bill, which funds EPA.

Rep. Marcy Kaptur (D-Ohio), the ranking member on the Energy and Water Development Subcommittee, decried the WOTUS rider during yesterday’s markup, saying it would "further complicate an already difficult process."

While Senate Democrats have already warned Republicans they will once again fight any "poison pill" riders included in the spending bills, there’s several advantages of the approach in Simpson’s bill that may make it worth Republicans’ time to press the fight.

For starters, the provision would allow the administration to skirt notice and comment procedures required under the Administrative Procedure Act, which could expedite efforts to promulgate a replacement rule. Additionally, the House rider would make it easier for the Trump administration to ignore the scientific justifications Obama’s EPA relied on to write the rule.

Simpson’s rider appears to insulate the administration’s actions from legal challenges under the APA, said Bill Snape, senior counsel for the Center for Biological Diversity.

"Congress has pretty wide authority to direct agency action so long as it doesn’t impede the authority of a federal court or a right granted by an agency to an individual," Snape wrote in an email.

While EPA and the Army Corps are already moving forward on their WOTUS repeal through notice and comment — they released a proposed regulation to rescind the rule Tuesday — the appropriations bill provision could be retroactive and act as a shield against lawsuits, said Larry Liebesman, a former Department of Justice attorney who’s now a senior adviser with the Washington water resources firm Dawson & Associates.

The language of the provision, he said, is vague enough that "if it is enacted even after they have been through notice and comment, it could still mean the APA wouldn’t apply to any legal challenges."

Adam White, a research fellow at the Hoover Institution, said the rider could act as a "belt and suspenders" provision.

"It can’t hurt to have multiple legal safeguards," he said.

While Congress does have the authority to grant exceptions from the APA process — the Energy Policy and Conservation Act grants the Department of Energy the authority to issue large energy efficiency standards without notice and comment — some analysts are calling the rider language unprecedented.

"I haven’t seen anything like this before," he said. "Congress authorizing an agency to withdraw a rule with no procedural requirements whatsoever, no requirement to comply with the Administrative Procedure Act — this is stunning."

Sam Batkins, director of regulatory policy at the American Action Forum, initially agreed with Narang that the language seemed unusual, but then was able to locate a number of previous instances.

For example, the $410 billion Omnibus Appropriations Act of 2009, signed by President Obama, authorized the secretary of the Interior to withdraw a polar bear rule "without regard to any provision of statute or regulation that establishes a requirement for such withdrawal."

"So, it’s not without precedent, but that doesn’t mean it won’t be without controversy," Batkins said.

"The rider would be a congressional blessing to move quickly on the WOTUS repeal with the caveat that this language would require 60 votes in the Senate and whether or not [Democrats] want to hold up the appropriations bill over the provision knowing [WOTUS] will be repealed eventually and likely wind up in court."

While Democrats have vowed to block such riders, Narang said he’s worried the move sets a dangerous precedent.

"It does look, on its face, lawless, that they are trying to allow the EPA to withdraw the waters rule by fiat," he said. "We are concerned other riders will be fashioned in this way to skirt APA."