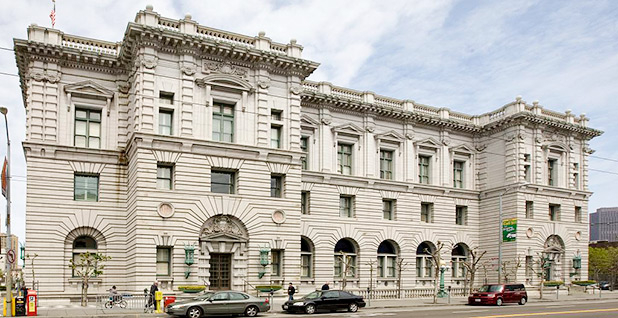 Environmental advocates are putting a spotlight on the 9th U.S. Circuit Court of Appeals and its powerful role in environmental law.

The League of Conservation Voters Education Fund yesterday launched Defend the Ninth, a campaign focused on judicial nominations for the appeals court.

LCV’s newly launched website outlines the 9th Circuit’s jurisdiction over nine Western states, plus Guam and the Northern Mariana Islands. It has the broadest scope of any circuit court and carries a particularly heavy environmental caseload.

"It hears more environmental cases than any other appeals court, determining how our nation’s laws address climate change, clean air, clean water, mining and our oceans," says a video on the website. "It’s critical that the nominees to this court are qualified, fair and have bipartisan support."

Ben Driscoll, who heads LCV’s judiciary program, said the campaign is aimed at educating the public about the 9th Circuit’s influence on environmental policy. In short: "People who care about the environment should care about our courts," he said.

Ordinary people tend to pay close attention to Supreme Court nominations, he said, but not to lower court battles. The 9th Circuit presents a good opportunity to connect with voters who care about green issues because of the sheer number of environmental cases that land on the court’s docket, Driscoll said.

LCV’s video notes that some 75 percent of the nation’s public lands fall under the 9th Circuit’s jurisdiction, along with half of the country’s ocean coastline, half of national parks and more than 60 percent of endangered species.

Environmentalists and other left-leaning groups see the West Coast circuit as a preferred venue for legal battles. President Trump has often criticized the court for striking down many of his administration’s policies.

His aggressive push to fill the federal bench with conservative-leaning judges has resulted in three new judges on the 9th Circuit so far.

LCV has accused the White House of pushing nominees who are unqualified and partisan.