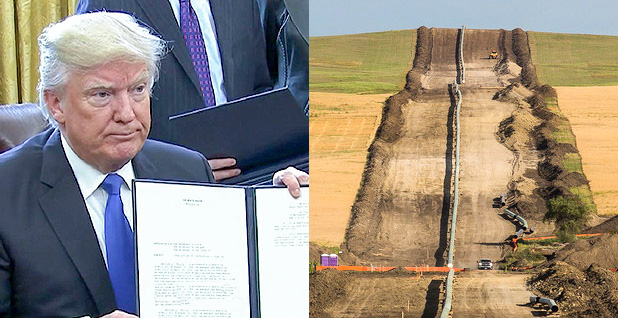 Promoting energy infrastructure, including the Keystone XL and Dakota Access pipelines, has been a priority for President Trump during his first 100 days in office. Photos by C-SPAN and Tony Webster/Flickr (pipeline).

Sixth part of a series.

Donald Trump on the campaign trail came out swinging on energy issues, promising to revive a dying coal industry, usher in a surge of new oil and gas infrastructure, and roll back Obama-era regulations.

But while the president’s myriad executive memos and orders and various agency appointments have thrilled Republican lawmakers and fossil fuel interests, some energy veterans question whether there is meat to the new administration’s actions.

"I think a lot of it’s just bravado and rhetoric without a great deal of delivery, even to his constituents," said Charles Ebinger, senior fellow at the Atlantic Council’s Global Energy Center. "I’d think they’d start getting a little irritated, seems to be all show and not much action."

Within the past 100 days, Trump has welcomed back the Keystone XL and Dakota Access oil pipelines and ordered a plan to make sure all new or expanded U.S. projects use domestic steel.

The president has also signaled the rollback of a host of U.S. EPA rules, like the Clean Power Plan and methane restrictions, and the opening of offshore waters to expanded drilling.

Republican lawmakers say Trump is indeed delivering on the broad-brush promises of his campaign, pointing to the successful use of the Congressional Review Act to block President Obama’s regulations, as well as executive actions to unwind other policies.

"I think he’s made real progress," Sen. John Hoeven (R-N.D.) said this week. "Right out of the blocks we wanted to reduce the regulatory burden, and there’s no question he’s doing it. And I think that’s why you’re seeing some strengths and improvements in the economy. And we’re not done."

"There’s a spring in the step all around Wyoming," he said earlier this week. "People are very happy with the way things are heading in terms of energy development and exploration and economic opportunity."

Trump allies and advisers agree on the president’s success but are also focusing on the list on unfinished priority items on energy and the environment.

"I think the White House has set the tone, the agenda for his agencies. It’s very clear he’s committed to at least attempting to fill his promises," said Thomas Pyle, president of the Institute for Energy Research and former leader of Trump’s Energy Department transition team.

"The question is how the secretaries and administrators implement them," said Pyle, "and whether they can get them done and how soon and what impacts positively they’ll have on the economy and energy."

Republican lawmakers say the president’s legislative agenda has developed slower than some had anticipated, with details of major agenda items — such as comprehensive tax reform and the $1 trillion infrastructure plan — only trickling out.

There’s also been grumbling for months that many key vacancies at federal agencies remain unfulfilled, despite prodding from industry and lawmakers themselves who fear shorthanded staff and agencies are hampering the president’s priorities.

Sen. Bill Cassidy (R-La.), a member of the Energy and Finance committees, said some aspects of the economic growth Trump promised on the campaign trail will by necessity take longer than 100 days.

"The guy said he wanted to create jobs, right?" he said. "That was his No. 1 priority. That is related to tax reform, regulatory relief and infrastructure development."

"Could it have been better?" he asked of the president’s first 100 days. "Yes. Have we made a running start? I think yes."

‘He hasn’t done anything’

With many committees eyeing the infrastructure package as a vehicle for carrying legislative priorities, Hoeven said it will take longer to build enough support to gain the 60 votes necessary to advance the bill through the Senate.

But he portrayed Trump’s first 100 days as part of a multi-pronged strategy to stimulate the economy, citing the actions already taken on regulations, as well as the confirmation of "strict constructionist" Neil Gorsuch to the Supreme Court.

"All those fronts are at work, and that’s why I say we’re making real progress," he said. "The legislative piece takes a little longer, and that’s to be expected."

Democrats, not surprisingly, painted a less rosy picture of Trump’s first 100 days, saying the president failed to match his campaign rhetoric on jobs.

"He hasn’t done anything so far," said Sen. Dianne Feinstein (D-Calif.), ranking member on the Energy and Water Appropriations Subcommittee, when asked about Trump’s energy accomplishments.

Sen. Debbie Stabenow (D-Mich.) said, "He’s made a lot of promises to the people that I represent in Michigan and that my colleagues represent in their states as well, in terms of setting the stage to create jobs, being able to stop outsourcing that hurts middle-class and working families.

"But as my mother always said, actions speak louder than words. Studies aren’t enough. Talking about something is not enough."

Stabenow dinged Trump for his repeated pledge that KXL and Dakota Access would be built with American steel. Observers and reporters have disproved those claims.

Rep. David Cicilline (D-R.I.), a co-chairman of the Democratic Policy and Communications Committee, slammed Trump for focusing on "divisive" issues that only appeal to his base.

"Many of us heard a lot of the rhetoric of the president during his campaign and thought, ‘This is an area we could work on together,’ but what we’ve seen is a lot of discussion of those issues, a lot of use of them in political rallies, but very little if any execution of those policies by way of legislation or working with Democrats to move it forward," Cicilline said this week.

Sen. Bob Casey (D-Pa.) noted that Trump has yet to offer a plan for either infrastructure or renegotiating the North American Free Trade Agreement.

Casey, who has been forceful in criticising Trump, also laid into the president for not doing more in the fight to extend health benefits for coal workers. Trump campaigned heavily in coal country.

On Twitter yesterday, the president accused Democrats of being the ones to jeopardize miner benefits in negotiations to keep the government open. However, coal country lawmakers on both sides of the aisle have long been lobbying on the issue.

While lawmakers await details on the infrastructure package, the administration has signaled it could move to deliver a number of energy industry asks, including expediting exports of liquefied natural gas, streamlining permitting of oil and gas pipelines and hydropower projects, and opening federal waters to increased drilling.

Pyle said much of what the president can do to bolster the oil and gas sector will happen on a case-by-case basis to relieve bottlenecks, pointing to Energy Secretary Rick Perry’s recent approval of LNG exports from the Texas-based Golden Pass terminal to countries that lack free-trade agreements with the U.S.

Trump’s approval of high-profile projects like KXL and Dakota Access that languished under Obama have already injected the sector with certainty, Pyle added, and the permitting reform could arrive in an infrastructure package of regulatory reform.

He also said the yet-to-be-named head of the Council on Environmental Quality could help in that regard. Pyle, pushing back on the notion Trump hasn’t moved fast enough, called for patience.

"On energy and environment stuff, the White House has set the tone and the agenda on these issues through executive orders … but it’s not like tomorrow everything’s going to be resolved," Pyle said.