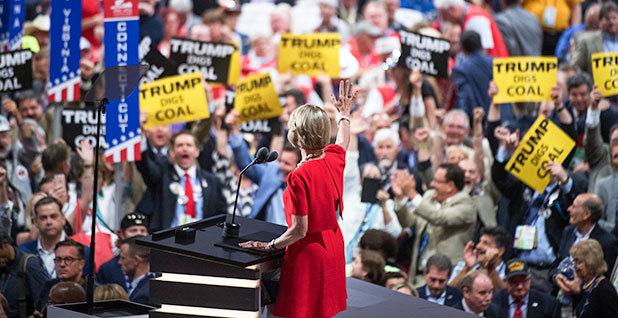 CLEVELAND — A Texas delegate tilted his hat back when asked about climate change and said, "Ew." A delegate from Florida lamented his party’s inaction on warming. And one from Wyoming claims it’s a conspiracy to hide the government’s involvement in the spread of a damaging beetle.

Reactions here to the issue of rising temperatures swing sharply between rejection and acceptance, with many falling somewhere in the middle. ClimateWire asked 51 delegates and alternate delegates attending the Republican convention if they agree with scientists that climate change is happening and whether people contribute to it.

A large majority, 39, said the Earth’s climate system is changing, while eight said it’s not. Four weren’t sure. On the knottier question of whether human activities like driving cars contribute to those changes, 23 delegates said they do, compared to 17 who said people don’t influence the climate. Eleven answered maybe.

The collection of views underscores stark divisions within the Republican Party on the issue of global warming. Opinions vary widely about whether scientists are right that emissions from the use of coal, oil and natural gas will continue to push temperatures up. But that gap seems to be narrowing.

Americans — including Republicans — are saying they’re concerned more now about the issue than at any other time, according to a recent Gallup Poll. Forty percent of Republicans surveyed in March said they worry a great deal or a fair amount about rising temperatures, a 9-point jump from the previous year. And 38 percent of Republicans said human activities contribute to it, an increase of 4 points.

"Americans are now expressing record- or near-record-high belief that global warming is happening," the Gallup Poll said, suggesting that a confluence of factors like a bad economy, "Climategate" and pushback against warming led to a temporary dip in support between 2009 and 2015.

Not everyone agrees. The Republican convention stands as perhaps the biggest coalescing of GOP activists at any time between presidential elections. Some 2,472 delegates from around the country are in Cleveland, and their views are as varied as the political pins they wear.

A.H. Goldstein, a retired Marine colonel who served in Vietnam, frowns at the idea that people can change the weather, which he says fluctuates over time on its own.

"There’s always been climate change," the Florida delegate said. "It’s called seasons. Sometimes with the tilt of the Earth, seasons might be longer."

Cars? No, but maybe nukes

Some delegates put conditions on how much transformation they think is happening within the climate. Many who say something is occurring are loath to say it’s unfolding like the Obama administration says it is. But when asked to put politics — and climate policies — aside, some delegates say everyday activities weigh heavily on the environment. Some pointed to the amount of trash they toss out. Others mentioned car exhaust. One donates clothing to stop it from going into the landfill.

Altogether, a number of Republican delegates pointed one way or another to the personal responsibility they feel about safeguarding nature.

That doesn’t carry over easily to notions about greenhouse gases, an invisible and natural substance that affects the Earth in ways that are difficult to see. Numerous delegates openly questioned the relationship between carbon dioxide and warming, the so-called greenhouse effect, which scientists have observed in experiments for more than 150 years.

Joseph Fuller, an alternate delegate for Alabama, suggested that driving cars might not affect the atmosphere. Is the Earth too big and too resilient to be affected by people?

"If you set off a bunch of nuclear weapons, that would probably contribute to a change that’s man-made," he said.

Another alternate delegate, Jenny Eckman of Georgia, believes that the human contribution to warming gets swept up in the shepherdless forces of nature that reshape the climate over millennia. It’s a common theme in the collection of delegate remarks: The world can overcome our behavior.

Some think that people might be changing the climate, but that the harm is temporary, like a scrape on the arm. "It’s like anything else," said Bill Knowles, an alternate delegate from Georgia, "it’ll heal itself eventually."

"It just recycles all the time," said Kimberly Heath, a Washington state delegate who wore a hat in the shape of pine tree. "I don’t believe there’s any man-made climate change."

Some of the delegates echoed a small Republican movement in Congress spearheaded by about a dozen lawmakers from moderate districts in states like New York, Pennsylvania and Florida. Those members of Congress are trying to soften their party’s tone in the temperature debate.

"Good for them," said Richard Crotty, a Florida delegate, who called himself an "outlier" on the issue. "I think it should be one of the key issues going forward."

Some even believe there should be subsidies for cleaner forms of transportation fuel. Mark Fitz, a delegate from Oregon, owns a company that transports oil and biofuel to business with delivery vehicles.

"There’s no way the amount of people living on our planet emitting exhaust doesn’t have an impact," he said. "New stuff [like LED lights and some biofuels] is more efficient. How do you subsidize new stuff?"

That’s not what Harriet Hageman wants to hear.

The Wyoming delegate believes that climate models are wrong and that scientists adjust the data to get the results they’re looking for. She pointed to a light pole outside of the Quicken Loans Arena as an example of a weather station that was once in a rural area but is now surrounded by pavement that tends to be warmer.

That’s one reason she believes there are widespread errors in the temperature data.

Hageman, a water and natural resources lawyer, also said the federal government is using climate change as "a cover-up" to hide forest management practices that contributed to the spread of the pine beetle. The pest has killed millions of acres of pine forests across the western United States.

"I think it’s a scam," she said of climate change. "I think it will be exposed as a scam."