How Biden might win allies in the oil patch 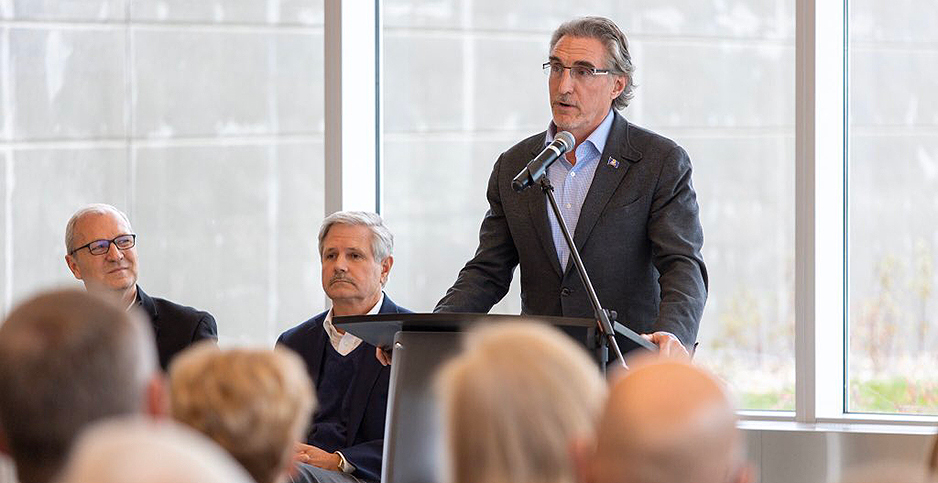 Democratic President-elect Joe Biden, who has pledged to cut the climate-warming emissions from the oil and gas industry, may find it easier to work with energy-producing states than the Obama administration.

Under President Obama, states led by Texas and North Dakota generally resisted broader rules on hydraulic fracturing, or fracking, and methane emissions from the oil and gas sector. At the time, the Interstate Oil and Gas Compact Commission (IOGCC), which serves as a trade group for state energy regulators, pushed a "states first" initiative aimed at curbing federal regulations.

When the Obama administration proposed a plan to regulate fracking on federal property, some of the states declined to help enforce it (Energywire, May 20, 2015).

That’s changed during the last few years. In 2018, two of the biggest oil-producing states moved to the left on energy regulation, partly because of shifting policies under new governors. New Mexico elected Democratic Gov. Michelle Lujan Grisham, who has started working to curb pollution from her state’s oil and gas industry. And Colorado Gov. Jared Polis has been more aggressive about his state’s energy producers than fellow Democrat John Hickenlooper, who left the office in 2018.

States play a key role in carrying out White House priorities: Their environmental agencies usually have more local staff than EPA, and they frequently sign legal agreements that allow them to enforce federal regulations.

Top energy-producing states are also interested in using federal stimulus funds to plug abandoned oil and gas wells, a critical environmental problem that’s been perennially underfunded. And even Texas has a political fight brewing over pipelines and eminent domain.

There’s still some tension. This week, North Dakota Gov. Doug Burgum (R) hinted that his state would put up a fight if the Biden administration tries to infringe on its authority. North Dakota and other oil-producing states were able to slow down the Obama administration’s fracking and emissions regulations for years with lawsuits and appeals.

"If it’s under the guise of, ‘Hey, we have to do it to save the environment,’ nobody cares about the air and water in North Dakota more than people who live here," Burgum said during a virtual meeting of the IOGCC. "And so this idea that somebody from the federal government is going to tell North Dakotans that you need clean air and clean water is absurd to any farmer, to any rancher, to any mineral developer."

Here’s a look at three areas to watch:

Biden’s campaign promised to create 250,000 jobs plugging abandoned oil and gas wells and cleaning up coal, hardrock and uranium mines. It’s unclear from Biden’s proposal how many of the jobs would be in the oil field, but more than 100,000 oil and gas workers have been laid off during the coronavirus pandemic.

At least two states have used federal stimulus money to plug abandoned wells. The IOGCC, along with some Democratic lawmakers and environmental groups, has pushed for more funding to plug wells in a future stimulus bill — although the fate of any such bill could hinge on the makeup of Congress.

Burgum’s administration agreed in May to use $66 million from its $1.25 billion in federal stimulus funds to plug abandoned wells. At the time, state officials said the money would not only prevent spills and environmental problems at so-called orphan sites but also help the oil industry retain skilled workers who might otherwise leave North Dakota.

Last month, the state opted to use about $16 million in leftover stimulus funds to help oil producers hydraulically fracture some of their existing wells. Like the plugging problem, the state hopes the fracking subsidy will encourage companies to keep operating in North Dakota. The state’s oil production has crashed because of the pandemic, forcing thousands of layoffs just in the Bakken Shale oil field (Greenwire, Oct. 26).

In Wyoming, Gov. Mark Gordon (R) approved using $15 million in federal funds to help the oil industry. Like North Dakota, Wyoming will use the funds to plug abandoned wells and to help companies frack existing wells, according to a news release.

Biden has pledged to cut the country’s greenhouse gas emissions, and analysts have said he could do it quickly by reinstating the Obama administration’s restrictions on methane emissions from oil and gas production (Energywire, Nov. 9).

Obama’s EPA finalized the rules in 2016, but the Trump administration rolled the plan back shortly after taking office.

Methane rules were a novel idea when Obama took office in 2009.

But Colorado imposed the first regulations on the greenhouse gas in the country in 2014, requiring companies to periodically check for and repair leaks at oil and gas wells and other installations (Energywire, Feb. 24, 2014).

Since then, other states have imposed similar regulations on energy production, including California, Utah and Wyoming. Pennsylvania, under Democratic Gov. Tom Wolf, enacted a permitting system to control emissions from new wells in 2018 and is working on regulations for existing wells (Energywire, July 28).

Under Polis’ administration, the Colorado Oil and Gas Conservation Commission is pushing for even tighter regulations. It’s scheduled to vote later this month to ban most routine flaring at oil and gas sites.

The rules will require companies to connect gas-gathering pipelines to most oil wells, rather than venting gas to the atmosphere or burning it in flares. The state is also considering a 2,000-foot setback between new wells and surrounding homes, along with restrictions on development aimed at protecting wildlife. The commission appears likely to approve the rules, although the oil industry has threatened to sue over the setback proposal (Energywire, Sept. 21).

In New Mexico, Lujan Grisham ordered state regulators to address methane and other greenhouse gases shortly after taking office in 2019. The state Oil Conservation Division is scheduled to vote in January on a plan that would require oil and gas companies to capture 98% of the gas they produce.

North Dakota only recently got its gas capture rate to 93%, according to data for September, the most recent month available. And it doesn’t require any of the monitoring and other measures that New Mexico is considering.

While Biden’s opposition to pipelines, including Keystone XL, is based on environmental and climate worries, the former vice president could find allies, at least in principle, in state-level activists who are fighting pipelines out of concern for landowner rights.

State legislators in Texas, backed by farmers and ranchers, have tried for the last few sessions to reform the state’s eminent domain laws, which allow pipeline operators and other private companies to condemn private land for their projects.

They came close in 2019, when the state Senate passed a bill that would have protected landowners from low offers, the Texas Tribune reported. The state House passed a different version that was friendlier to pipeline companies, and the two chambers were unable to resolve their differences.

At least one eminent domain bill has already been filed for the 2021 legislative session, which would institute a bill of rights for landowners in eminent domain cases.

Oil-friendly lawmakers, speaking at a forum sponsored by the Texas Oil & Gas Association on Nov. 5, said they’re happy with the current system and don’t see a need for eminent domain reform.

"At this point, I would feel that we’re OK where we’re at," said Rep. Oscar Longoria, a Democrat who serves on the state House Appropriations Committee.