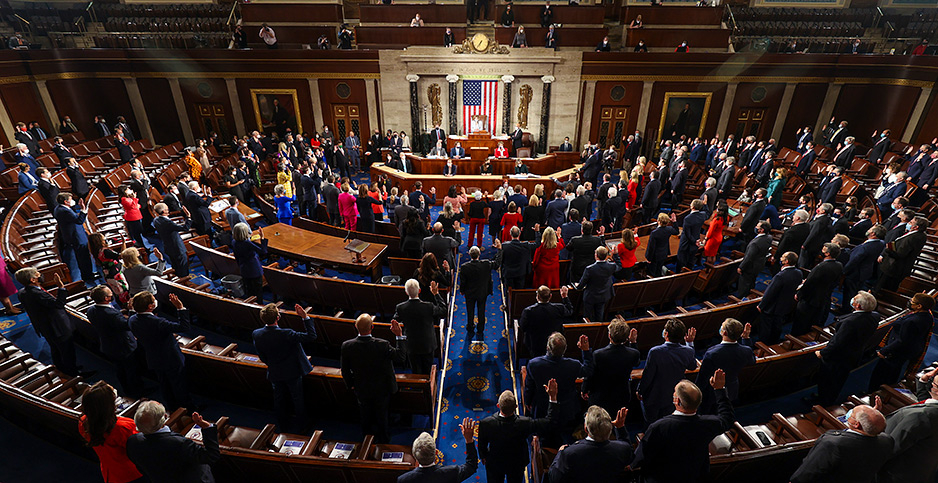 A view of the House chamber in January. CNP/AdMedia/Newscom

Everglades restoration might get a boost. King Coal could get knocked down. Oil and gas production in Texas may not have as much sway.

Those are just some of the environment and energy trends that may emerge as states gain or lose congressional seats as the nation’s once-a-decade reapportionment of 435 House districts plays out.

The firm ran population data — birth, death and immigration records — through a formula to conclude that seven states may gain new seats, while 10 states stand to lose seats.

Ron Jarmin, the Census Bureau’s acting director, wrote in a recent blog post that that data will be released no later than April 30.

The implications for energy policy, experts say, loom large. A new seat for South Florida could translate into a stronger voice for Everglades restoration, said J. Miles Coleman, associate editor of Sabato’s Crystal Ball at the University of Virginia Center for Politics.

But in Texas, most of the population growth has been around Houston, and not so much in West Texas, where much of the oil and gas production is located, he said.

"The population hasn’t grown in just one spot, and it’s possible that some rural districts out in West Texas, they’ll have to expand even more and take in even more population, and oil interests may be a bit less of a voice," said Coleman.

Coleman said he’s not surprised the Sunshine and Lone Star states are gaining seats; it’s part of the robust population growth the states have seen for decades.

"It’s part of this long-term shift, sort of from population, as we move from that northeast or Rust Belt," he said. "One thing you have to consider when it comes to the census or apportionment, when someone gains, someone is going to have to lose, as well."

West Virginia, where coal politics remain important, had four seats between the 1970s and early ’90s. It then went to three and may soon drop to two.

‘Our time is now’

Advocates for restoring the Everglades, one of the largest ecosystem rescue attempts of its kind, are welcoming news that Florida could gain a congressional seat or two.

More House members may translate into a stronger push on Capitol Hill for funding and approval of federal projects critical to ensuring that the unique ecosystem — struggling in the face of pollution, climate change and development — receives enough clean, fresh water.

The most recent cost estimate for the restoration is now an eye-popping $23 billion, triple the original estimated $7.8 billion price tag (Greenwire, Jan. 4).

Eric Eikenberg, CEO of the Everglades Foundation, said Florida in recent decades has continued to increase its congressional representation near and within the Everglades footprint, which now supplies drinking water for 9 million people, and is continuing to see population growth in South Florida and the Tampa Bay area.

Restoring the Everglades isn’t just about drinking water, he said, but also about supporting the economy, because South Florida doesn’t have an income tax and relies heavily on tourism, which is tied to real estate values.

"If this most recent census due to the growth has two additional seats, then South Florida has seen rapid growth. We would welcome additional members to go to Washington and fight for this because, quite frankly, we’re getting to a point where our time is now and we’re optimistic," Eikenberg said.

"We work with lawmakers from Pensacola to Key West, and the beauty of adding another two seats, with one possibly in Miami, is we’d be the second- or third-largest delegation in the Congress, and that has a lot of pull," he said.

Last year, Congress appropriated $250 million for the Everglades, and the foundation is hoping for the next spending request to include $725 million, with a goal of finishing the restoration within the next decade, said Eikenberg.

That spending could also be included in an infrastructure package set to move through Congress in the coming weeks, he said.

Sean Cooley, a spokesman for the South Florida Water Management District, said, "With an already united Florida Congressional Delegation in support of Everglades restoration, additional Members of Congress in Florida could further elevate the importance of restoring this international treasure for our nation."

What’s not clear is where exactly the new congressional seats may be located or what party they’ll be affiliated with.

That’s partly because the Census Bureau won’t release its initial counts of residential populations for each state until the end of April.

More granular data on county, state and neighborhood growth, which will reveal more about the location of new seats, may not come out until the fall, said Brace.

When the final information is out, each state has its own process for determining how to draw the lines. Generally, either state lawmakers or independent commissions take the lead.

"It’s almost like the pandemic: Every state has had a different response; every state draws states a bit differently," Brace said.

"Redistricting is basically like any other bill: It’s passed through both chambers and has to be signed by the governor," he said.

Although the Florida Legislature is slated to convene in March, it could take two years for lawmakers to produce congressional maps. When the same process rolled out a decade ago, the state’s efforts ran into legal challenges and the Florida Supreme Court found portions of the 2012 map were invalid.

Other factors that could shift the number of seats gained or lost include the quality of the census numbers, Brace said, noting that the Trump administration conducted the census in the middle of an ongoing pandemic. There was also litigation about whether to add a citizenship question.

Some groups are hoping policy changes under the Biden administration mean the process is more transparent, but say that has yet to be seen.

Jarmin noted in his blog that a group of independent technical experts who advise the federal government on sensitive matters in science and technology will be overseeing the process at the bureau.

"These efforts will give the public an unprecedented behind-the-scenes look at the 2020 Census and should provide additional confidence in assessing the fitness of the 2020 Census data," he wrote.